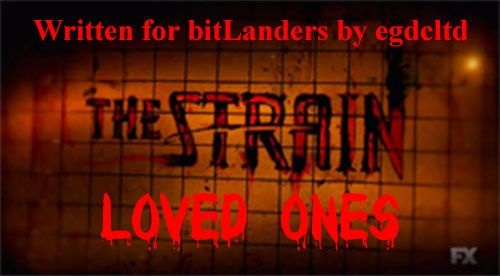 "Loved Ones" is episode ten of season one of The Strain, a vampire horror series based on the novels by Guillermo del Toro and Chuck Hogan. In this episode, Eph goes looking for Kelly and an attempt is made to infiltrate the Stoneheart Group.

Zach is Looking For His Mother's Phone

The episode opens with Zach looking through some of the mobile phones that Abraham has in his display cabinets. Including a huge one that is probably significantly older than Zach himself. None appear to be working. Outside, there are sounds of sirens, the occasional screech of tyres and a few people running. Zach notices a display of laptops and fires one up, but there is no WiFi signal. He wanders through the building until he finally picks a signal. Zach then searches for 'find kelly goodweather's iphone' which leads him to a site that shows its current location. Looks like a couple of security steps may have been skipped there. 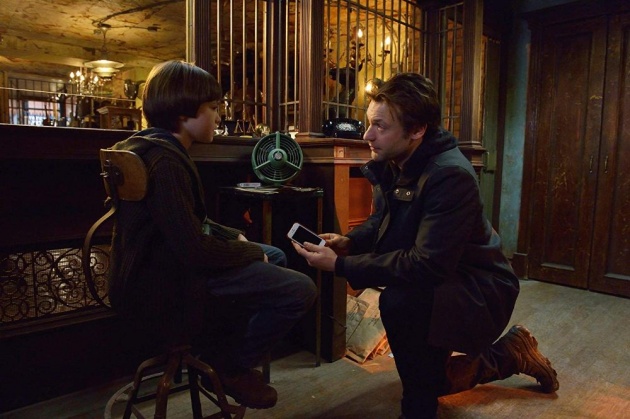 Kelly's Phone is is Moving; That Doesn't Mean She's Okay

The site goes down again as the WiFi does, then Zach gets it again. The phone's position has moved slightly in the intervening time. He calls for his father, saying he has found his mother's phone and it's moving. Eph comes into the room and asks if Zach was able to get online. He tells him yes, although it's super slow. Zach tells his father he lost his phone a few months back and used this site to find it. He says that as Kelly's phone is moving, she's got to be okay. Right? Well, not necessarily. Although Eph doesn't say that, simply telling Zach he will go to find her. Zach tries calling his mother on a landline, but only gets an answerphone and leaves a message.

Nora is with her mother and the radio is on saying that the president has declared a bank holiday to try and help with the current economic situation, but world financial markets still have problems. Mariela asks Nora if Eph is the man she loves. In Spanish, which it seems Eph doesn't understand. Eph tells Nora that Kelly's phone is moving during daylight. Nora tells Eph that Abraham has a plan, but he replies that he has to do this first. He also apologises for what he said. In the previous episode, "The Disappeared", when Diane came in and found the two on the floor Eph told Diane that he loves his wife and she's the mother of his child. Nicely stating that Nora is just a bit on the side. At least Eph realised how he hurt Nora, and says he knew what he was doing with her. Eph continues, saying he has to do this first as there's a real chance. Abraham arrives and tells Eph that he must go then. But to be prepared for what he might find.

It's a Shame the Internet is Down

Once Eph has left, Vasiliy has a map of Manhattan out and is speaking to Nora, Abraham and Dutch. He says that he tracked the epicentre of the rat free zone to the World Trade Centre, in "Runaways", and went down into the tunnels and found a few dozen vampires. Vasiliy says that going against the vamps head-on on their own turf is a good way to die. Then he says that rats always have a back door, which is why they are so tricky to stop, and he bets the vamps have one too. So Vasiliy wants to look at all the tunnels in the area. He says that it's a pity the internet is down as there's a great transit archive online.

About the Internet Being Down...

Dutch interjects at this point that she's sorry for that. Although she told Abraham she was responsible, the others didn't know. Dutch admits that she, well she and her team, took down the internet and mobile networks on behalf of Eldritch Palmer. Dutch continues, saying she never meant to hurt anyone and has been searching for a way to make things right. And she's come up with one. If she can get into Palmer's office. Vasiliy suggests that they go there and use his city ID to gain entrance. Dutch says she can be his boss. Vasiliy says assistant, she says boss again. Vasiliy replies that's details. 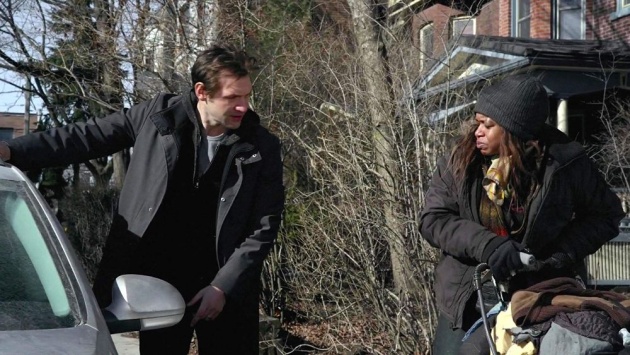 Eph is out looking for Kelly, and there is a lot of looting going on. He spots the phone, but a homeless woman has it. She tells Eph that she found it on the street; Eph had asked where the woman whose phone it is was, but there wasn't a woman with it. And why should she talk to a cop. Eph replies that he isn't a cop, he's a doctor. Which is more helpful; the woman wants help with her leg which has become infected. Eph treats and bandages the wound (did he have a bandage in his pocket), a burn, and the woman leads Eph to where she found the phone. Which is next to Kelly's car. Inside the car Eph finds a bloody cloth. So is Kelly infected?

It then goes back 32 hours. Kelly is in bed asleep when Matt arrives. He was infected at the end of "Occultation" but hasn't fully gone yet, for he looks at Kelly then turns away and enters the bathroom. This wakes Kelly up, he goes and knocks on the en-suite's door. Matt doesn't answer, although there are some noise, and the door is locked. Kelly says she has to get ready for work but Matt doesn't reply. 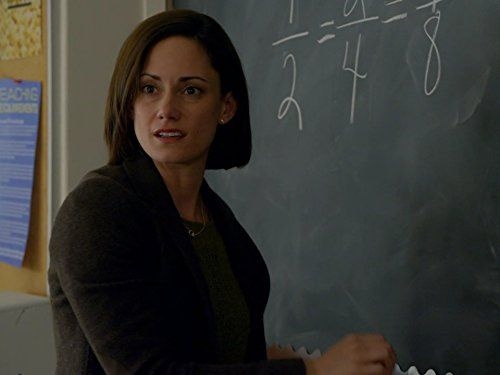 Should Have Gone Earlier

Kelly arrives at work and is in a classroom when another teacher enters and seems surprised to see her. Half the kids and the staff haven't turned up. Kelly asks if they are sick and is told yes, and a bunch didn't even bother phoning in. The kids are being released early. Kelly realises that Eph was right and she should have listened to him. The other teacher sees the worry on Kelly's face and asks if she knows something. Kelly replies that Eph told her about the virus, and to leave town. Kelly starts leaving; she says she is getting Zach and heading out of town and the other teacher should do the same. Only Kelly really should have done this when Eph first told her. 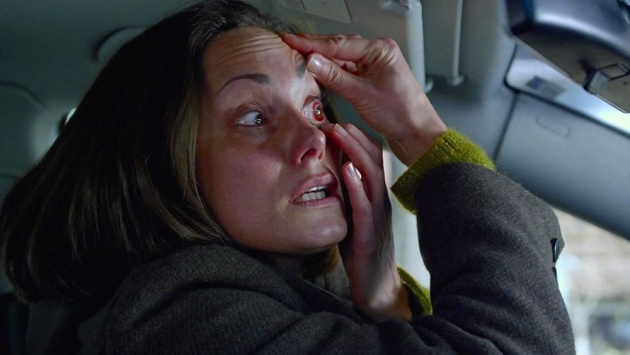 Kelly Has a Worm in Her

Kelly arrives home and calls out to Matt, saying that Eph was right and Matt called the FBI on him. Then Matt appears, and he's now turned. He attacks Kelly, she grabs something that and hits him in the face, causing the cuts Eph and the others saw. Vampire blood comes from the wound and a worm lands on Kelly's face and wriggles in through her tear duct. Going by previous experience, she's now had it. Kelly runs away and gets outside; it's daylight so Matt can't follow. Kelly drives off then stops the car and looks at her eye. It's not good.

A few hours later and it's nearly dark. Kelly wakes up in her car, and is clearly going downhill. She takes out her phone and starts trying to use it, then opens the car door and accidentally drops the phone. Kelly arrives at Zach's school and asks the receptionist where Zach is. She's told that the school finished early. Because they couldn't contact Kelly, her friend Diane was called instead. The receptionist can see Kelly is in a bad state and thinks she was in a car crash. That would be preferable. The receptionist tries phoning for help, but the line drops out. Kelly has already left. She sees a more fully transformed vamp, who can evidently sense what Kelly is becoming, for it follows an attacks a normal human. Which Kelly watches.

Heading for the Stoneheart Group

Back in the present and Dutch and Vasiliy are in the bread van heading for the Stoneheart Group. Dutch wants to know how Vasiliy is friends with the pawn shop guy; Vasiliy replies that he only met him last night. Just like her. Vasiliy wants to know what Dutch's story is; she says there is no story. Vasiliy replies that the pawn shop guy is a vampire hunter, and if she can top that he'd like to hear it. She doesn't elaborate. 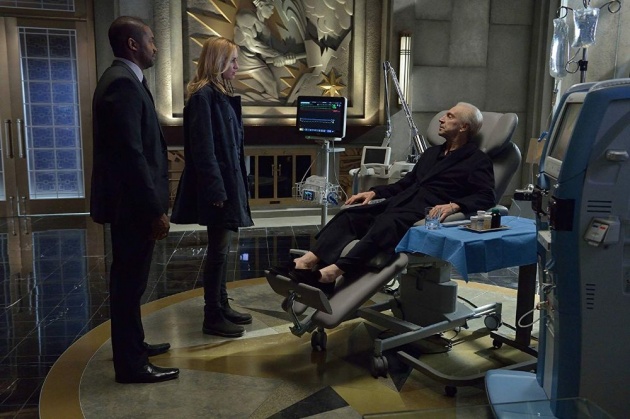 Infiltration Does Not Go Well

At Stoneheart, Vasiliy gets out his ID and tells the receptionist that they are from the New York Pest Control Service and are here to inspect the executive dining facilities. She replies that they don't have an appointment. Vasiliy tells her that they are not allowed to make appointments for inspection. The receptionist says that they need an appointment to get through security. Vasiliy says they will be in and out in ten minutes and manages to talk her into letting them in. It seems. As the lift stops, Vasiliy says it's all about confidence. However there are several security guards waiting for them. The two are taken to a security office where Reggie Fitzwilliam is. He remembers Dutch and tells the guards to search the pair. When guns are found, Reggie makes the obligatory comment about using them on rats and Vasiliy tells him only on really big ones. Palmer wants to see them, but only Dutch.

Eph arrives at his old house looking for Kelly, then it goes back 17 hours. Diane is asleep on her couch with the television on talking about bizarre murders and home invasions when Kelly arrives. Diane lets her in, and sees Kelly doesn't look well. She looks very unwell, and isn't talking. Kelly has now transformed, and she attacks - she was doing what Abraham said just turned vampires do - looking for loved ones. Zach.

A newly-transforming vampire is followed for the first time. Eph has to do something he probably doesn't want to do. Palmer expends a bit of effort gloating to Dutch about how she has helped him in his quest for immortality. Reggie, well, he's never really liked what Palmer has been doing, even though he is devoted to the old man. The question is, how much does Reggie actually disapprove?

The Strain - Loved Ones Trailer