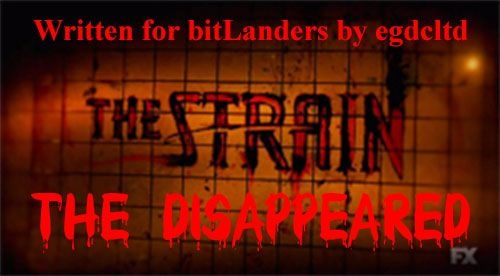 "The Disappeared" is episode nine of season one of The Strain, a vampire horror series based on the novels by Guillermo del Toro and Chuck Hogan. In this episode, Zach is found as Matt is trying to attack him and they regroup at Abraham's.

In the previous episode, "Creatures of the Night", Eph and the others had been trapped in a petrol station by rapidly-evolving vampires. Jim had been hit by a stinger, and a worm was in his face. Eph and Nora cut it out but discovered that his body was already overrun with the worms. Abraham told Jim that, after he returned, Jim would first prey on his loved ones. So Jim asked to be killed. Eph and Nora prevented Abraham from doing this but Vasiliy shot Jim several times. This did not make them happy. As they made it to the bread van, Eph told Vasiliy he would return the favour - which Vasiliy would appreciate. Then Eph had to kill the bread van's driver himself, to stop him from turning.

This episode with Zach being dropped off at home by Diane, his mother's friend. Diane says to Zach to get his mother to call her. She also asks if he's sure Matt's home, as it's dark in the house. At the end of "Occultation", Matt had been at work and discovered that one of his colleagues had been attacked. Matt had yelled at the figures he thought were responsible, who then turned towards him. As Zach enters his home, he calls out for his mother and Matt, but no-one answers. The bread van with Eph and the others in pulls up outside at around this time.

Matt is Infected; Eph Gets to Kill His Wife's Boyfriend

Inside the home, Zach has found things knocked over. Then Matt appears. As expected, he has turned, and there are also scratches on his face. Matt attempts to attack Zach but misses and Zach grabs a spade. In the van, as Eph is leaving, Abraham gives him a silver dagger for protection. When Eph gets inside he finds Matt still trying to get Zach and Eph stabs him with the dagger. Those still in the van hear the rather distinctive scream the vampire makes and rush into the house as well, where Eph has taken the spade and beaten Matt over the head with it before decapitating him. 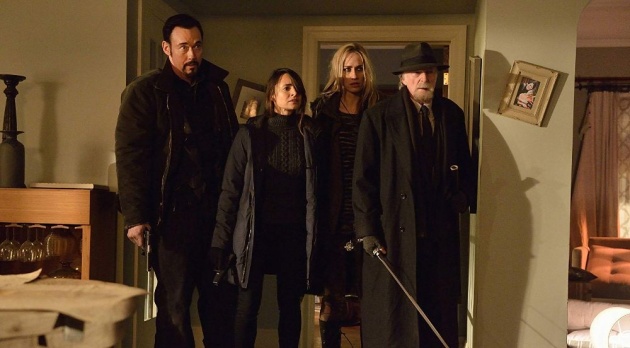 Eph asks Zach if he's okay, if he's bleeding, and Zach replies that he doesn't think so. When asked who the vampire was, Eph tells them that it was his ex-wife's boyfriend. Abraham says they need to search the house and asks if there is a basement. Vasiliy is going to check upstairs. Eph says that, if Kelly is down there, nothing happens to her whilst his son is here. Abraham says that's fair enough and Eph then asks Vasiliy if he heard him. He did. 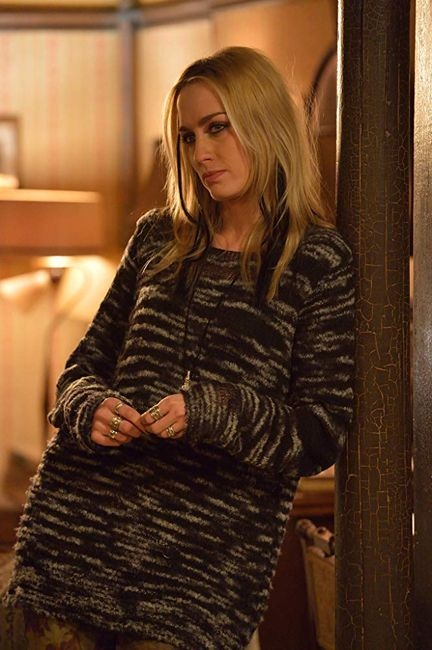 Should Have Gone to Vermont

Dutch asks where the booze is and Eph replies that he doesn't live here anymore. Zach asks his father what is happening, and Eph tells him that it's the epidemic he spoke about, and Matt had been infected. Eph asks when Zach saw Matt last, and he says yesterday morning, when they were arguing about Eph. Matt thought Eph's advice to go to Vermont was stupid - boy, was he wrong about that - and didn't even come home last night. Eph asks about the scratches on Matt's face and Zach says he was like that when he got there. Suggesting to Eph that Matt was wounded in another fight. Abraham and Vasiliy confirm the house is empty and Abe tells Eph that, if the worst has happened, Kelly will return for her son. So Zach needs taking away and Eph is going to dispose of the body. When Vasiliy asks how, Eph says he will burn it. 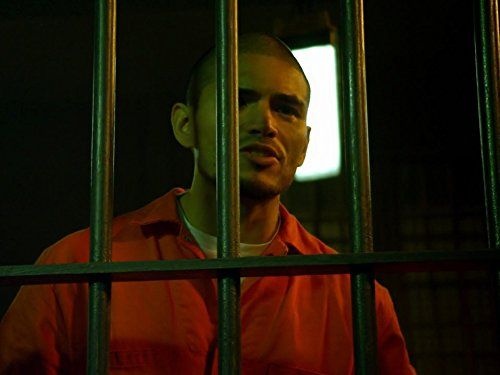 Gus and an Infected Felix Are Going in a Prisoner Transport

Gus is in the Manhattan Detention Complex with Felix, who does not look well. Gus shouts for the guards again, saying that they have rights and Felix is dying. When one of the guards finally speaks to Gus, he tells him that Felix is not the only guy suffering. A lot of guys are coming in sick - which does not bode well - and the city's system for first responders is messed up. There's a van coming to take them to Rikers but Gus says Felix won't make it that long. The guard says to Gus that if he wants Felix to stay alive, get him on the van as there is a doctor at Rikers that checks over the intake. So, Gus and some other prisoners are going to be back of a prisoner transport with Felix who certainly looks like he's going to turn in the not too distant future. That's probably not going to go well. 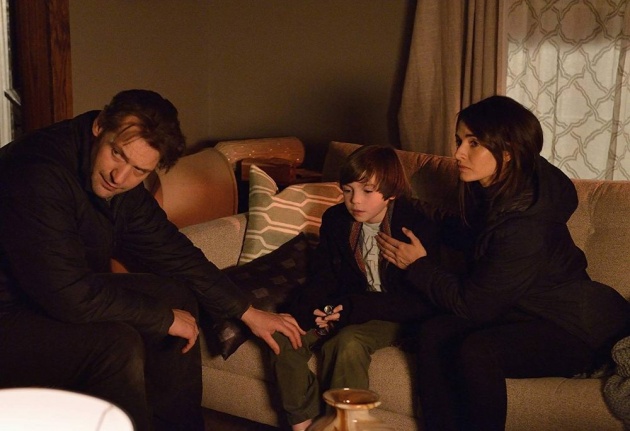 Zach Wants to Know What's Happened to His Mother

Back at home, Zach is asking his father if he really escaped from the FBI. Eph says he took a chance and took it. Besides, they shouldn't have arrested Eph in the first place. Zach wants to know who gave his dad the dagger and Eph tells him it was Mr Setrakian, who is helping them. Eph is going to stay and fix the place up, because Kelly will be mad if she comes back and finds it in a mess, whilst Zach goes to Mr Setrakian's pawn shop. Zach wants to know if anything has happened to his mother; Eph truthfully says that he doesn't know.

Plan Their Next Battle

Vasiliy speaks to Nora, says that he knows he didn't handle Jim the way she wanted, but if he hadn't done what he did, they would all be dead. Abraham agrees, saying that there is no hope for those infected. Vasiliy did what needed to be done. Nora think that, if anyone helped Jim die, it should be someone who loved him. Vasiliy retorts that she was not ready to do it. Dutch wants to be dropped off home on the way to the shop and Abraham says they need to plan their next battle. Nora is going to stay and help Eph tidy up.

I Don't Have Friends or Roommates

Outside Dutch's building, Vasiliy says that he is coming up with her to make sure she's safe. Dutch says that fine - but she's not making out with him. Inside her apartment, Dutch calls out for Nikki, the girl she was at the petrol station with. She isn't there, nor are some other things. Nikki has taken Dutch's money, and her laptop. Vasiliy comments that this is why he doesn't have roommates. Dutch tells him that Nikki was more than that, they were very close. Vasiliy's response to this is that this is why he doesn't have friends. Dutch says that everything she had was on her laptop. Vasiliy suggests Nikki took the stuff because she thought Dutch was dead. Dutch does not think that makes things better.

In the van, Abraham is talking to Zach. He knows that Zach is upset because Matt is dead and, hard as it might be to believe, Matt came after Zach because he loved him. Zach wants to know why Abraham called Matt a vampire; Abraham replies that's because he was one. Zach mentions that his father didn't use the name. Abraham replies that there is a power in naming things. Zach thinks that Matt was so angry; Abraham replies that he wasn't angry, just hungry. Matt was like a rabid animal, one that would turn on you simply because it had been infected.

Mariela is Not Happy

Upstairs, a neighbour of Dutch's comes into her apartment, even though she tells him not to. She thinks he's high but he's actually infected. Vasiliy deals with the vampire and tells Dutch she needs to come with, as her building is infected. At Abraham's, Nora's mother Mariela is not happy, She isn't pleased that they left her waiting this long, wants to know who these people are and states that she isn't cooking for them and storms off. Abraham introduces her to the others.

Abraham Thinks Vasiliy Will Be Helpful

Abraham gives Zach a book to read, and says it will help. Vasiliy, on seeing Abraham's preparations, says he must have seen it coming. Abraham replies that he hoped it wasn't. Vasiliy says that there must be humans helping and asks Abraham if he knows who they are. Abraham replies that he doesn't, but can speculate. Those seduced by the promise of power, and a yearn to leave a mark. They inadvertently hurt many people, but the people are still hurt. Dutch overhears this exchange. Abraham says if they can find the Master, they can end this, but he needs help. Vasiliy is unsentimental, precise and not ruled by emotion - a description Vasiliy does not appear to be over enamoured with - and knows New York. If they work together, they can find the Master. Vasiliy replies that he needs to go home to get a few things, but he'll be back.

Did Kelly Get Infected?

Nora and Eph speculate that Kelly must be the one who scratched Matt's face. She probably got away, in that case, but if she got away did she get away unscratched herself? And where might she be? Dutch provides some pieces of the puzzle, which means the Master's location might be narrowed down. 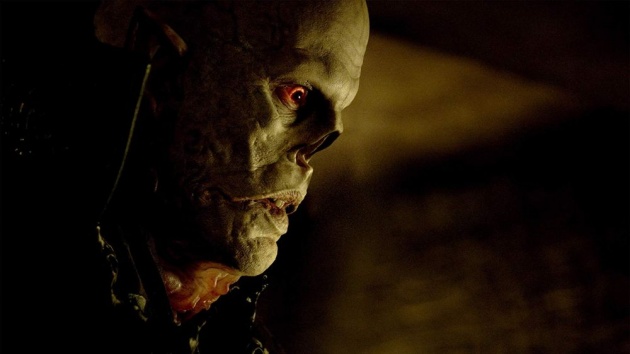 Back at the camp in Poland in 1944, Abraham and some other prisoners are digging a hole as Eichorst watches. It's probably intended to be a mass grave. The camp is also on the verge of being overrun, and preparations are made to leave. Abe plans to confront the Master, and the Master's face is seen for the first time, as is the conclusion of Eichorst's arrangement with him.

The Strain - The Disappeared Trailer