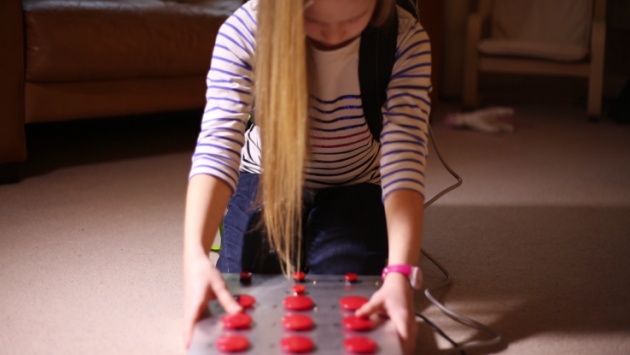 A Mexican educational psychologist duo has teamed up to build toys for blind or visually impaired kids. The first device they’re building is a wearable game called Smash-a-ball — pictured above in prototype form — which is being designed to help kids’ cognitive development.

The toy will consist of a backpack (and possibly also a wrist-based wearable, depending on how much funding they raise) which provides tactile (rather than visual) feedback which the kids then have to copy/pattern-match by hitting the corresponding buttons on the main board. Other games are in the works.

“When the child is wearing the backpack he will get tactile stimulus from the backpack in a way that he/she has to mimic with the main board, as fast and precise possible,” explains co-founder Pedro Bori. “With this first game mods, they will enhance their cognitive development in key skills like body and spatial awareness, increasing the reaction rate and the memory, as well as building a more solid self-esteem.

“With these skills promoted, we can say they can adapt better to new spaces and places, they will avoid accidents at dining table our schools desk, as well as in the streets when they get warned by possible hazard, because they’ll react faster.”

Although the pair started work on the concept back in 2012, in Mexico, they founded their startup in Scotland last May after winning a place on the UK Trade and Investment’s Sirius Programme, which supports international graduate entrepreneurs. They’ve now taken to Kickstarter to try to raise £100,000 in crowdfunding to turn their current prototype into a polished product.

Here’s what they’re hoping to turn Smash-a-ball into if they’re able to pull in enough funding:

The Smash-a-ball prototype was built by a California-based engineering team, given the co-founders lack of expertise in building hardware. But the team has now expanded to include industrial design and mechanical engineers and app developers, as it plans to develop a range of toys for the blind and visually impaired, including non-electronic toys and also apps — but all “with the same mindset”, as Bori puts it, to give “a fun and entertaining option to VI&B children as while they enhance their cognitive development”.

The team has built three prototypes at this stage in the product’s development — including a working prototype which they’ve been using for testing and getting feedback from kids, parents and teachers. He says they’re also in the process of rewriting their software to make it more user-friendly. And they’re planning on expanding the games that will be able to run on the Smash-a-ball hardware — with new games being side-loaded via USB.

“About the development work is left to do, is to finish to get the contracts for the PCB, mould injection, parts. As well as to finish the new software version so we can deliver our first wave with the newest software,” adds Bori.

If they hit their funding goal — they have a ways to go there, with just over £11,000 raised of their £100,000 target at the time of writing — they’re hoping to get Smash-a-ball in the hands of backers by September.