I've never been a Judo fan. I am a martial arts fan because of Jackie Chan and Donnie Yen but I've never practiced any of the sport even if my brothers did learn this as kids. I want to learn Wing Chun but I'll admit, I am a bit curious about Judo too...

Back when I was maybe 3 to 5 years old, I remember my parents used to bring me along to my two older brothers' Judo summer classes to pick them up once their lessons are done. I don't remember anything much but I know I saw lots of bigger kids than me in Judo uniform.

I think I remember some of them doing punches or I dunno maybe some exercises. It all seems fuzzy to me now since it was too long ago and I was too young to understand or care about what was happening anyway. Haha.

So let's see, I think we need to know what this sport is all about first.

Judo is a form of modern martial arts involving grappling and pinning techniques. Martial arts is a practice of combat systems or fighting styles. I'm no expert at these so let's learn the basics of Judo by watching this video.

Man, did you see that? We're gonna be doing lots of throwing people around if we do this! Lol, kidding. I think this sport is growing on me now. I need to throw some people or maybe I'd let myself get thrown around for some measure. Haha~

Anyway it looks kinda fun to me now that maybe I'd watch the live stream of the 2017 New York Open Judo Championships.

The New York Open Judo tournament started twenty five years ago. According to their website, this has become the most competitive international competition held in North America. Cool huh? Ah the things I learn in Bitlanders.

Looks like only four countries will be competing at this event this year: Israel, France, Germany and USA.

And did you know that Querlo, a chatbot with a human touch, has been a major sponsor of the New York Open Judo Team Championships for the last six years? Since Querlo is being managed by the same company handling Bitlanders, well it's no wonder we use and see it here all the time! No reason to wonder why this event is being talked about a lot here too.

But how different is Judo from other martial arts/sports like Wing Chun or it's more competitive sport called Wushu? Let's find out!

If you've seen Donnie Yen's movie series Ip Man, you're probably aware what this martial arts is. For those who haven't yet, this Chinese martial art is a form of self-defense for close combat.

It was said to have been started/created by a woman in ancient China but it is being practiced more by men now I think. Still don't let it stop you from learning Wing Chun even if you are a woman like me. It might be fun and it definitely is useful for self defense! I will be taking some lessons on this as soon as I can. Mark my words!

Check out this video to see what I'm talking about! The girl in white is using Wing Chun.

Now the sport Wushu is a derivative of Wing Chun. It is mainly a performance sport and considered not too much of an actual self defense kung fu.

Wushu has sport competitions held too like Judo. And upon further checking online, some say the term Wushu is generally for any type of martial arts originating in China. Do not be confused because I am talking about Wushu as a competitive sport, it being considered also as a modern martial arts and not anything else. In line with that, depending on the school you study under, it can still be used for actual combat application.

Judo in itself is a combat sport taught in a way that practicing and applying it is safe and will not hurt the opponents.

Basically these two are the same in the sense that the goal is to practice martial arts safely and competitively rather than to really use it in real life combat. I think it can still be helpful to know any kind of martial arts even if it's just considered a sport. Better to at least have some kind of level in training expertise than nothing at all right?

Have you ever heard of the term black-belter? Or have you wondered why different people wear different color belts in this sport? Well, as a child I sure wondered! Even while growing up I still hear or read about it. So what does having a black belt mean? It's actually the highest level in Judo ranking. The color of your belt will indicate your expertise and skill in the sport. 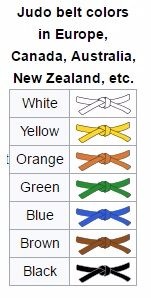 Aside from being a black belt if you're an expert, you can also hold a dan rank, which also indicates your ability level in any field, mostly in combat practices or fighting arts. For example Steven Seagal is 7th dan in Aikido, another martial art, while President Vladimir Putin is 8th dan in Judo. Cool huh?

As with any other sport, practicing this combat art is good for your health too. It will teach you more about balance, coordination and falling safely. I mean, watch the above video I shared and see what I mean. It can also help build muscle, increase cardio and lower cholesterol.

Wow. It's sounding more like I should take some lessons on this too. Haha~ I need to develop my sense of balance and coordination! I'm more of in the mind than in my body. Ah life. So anyway, instead of exercising, we may consider taking up a combat sport like Judo too. If not well we can always take up dancing for more fluid and smooth movements. If you've got two left feet like me these days then this sport probably is better.

Aside from health benefits, it's good for the mind too. It is said that there are certain moves and practices you can do that can involve meditation and breathing exercises to help relax you and lower stress levels. Plus it "builds self-confidence, trust, self-discipline and respect for oneself and others."

So then, have you decided if you're gonna learn this sport or not? After reading a lot about this sport I certainly will take some lessons one day. Wow, imagine that, at the end of my article I just decided to add this to my bucket list. Haha~ I don't care when I do this but it should be as soon as I can.

What about you? Do you do Judo? If not, will you or will you not do Judo anytime soon?