Trailer Review: THE JUDGE: could be Grisham, more likely schmaltz 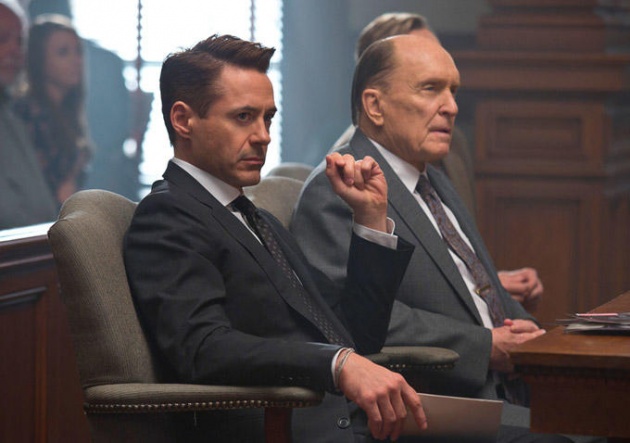 Trailer debuts get almost as much attention as film premieres. There was a time when you had to buy a ticket for a film, in my case, WILD HOGS, to catch a smidgen of the new PIRATES OF THE CARIBBEAN film (DEAD MAN’S CHEST, back in the day). These days, trailers air on the internet, uploaded onto prominent sites. Now that I have superfast(ish) internet from a company that optimistically promises ‘infinity’, I can watch the latest trailers online without waiting for them to load, or be exasperated by the stop and start experience. The first one I caught hassle-free was THE JUDGE, the latest Robert Downey Jr star vehicle (produced by his wife Susan), directed by David Dobkin (WEDDING CRASHERS, FRED CLAUS). The film opens in the UK on October 10th

The trailer introduces Downey Jr as Hank Palmer with a shot of the back of his head and we notice with a start that he is not balding. His character, a lawyer, is peeing and being insulted by an opponent or someone who isn’t his biggest fan (Team Moriarty, maybe or a fan of DC Comics rather than Marvel). Hank pees on the man’s suit. We know that he is in full ‘I’m so sure of myself I know you’re not going to bother me’ mode or, if you prefer, ‘I’m pretending not to be bothered by you, but how dare you engage me when I have a leaky faucet’. Hank tells us that he is happy to defend guilty people ‘because innocent people couldn’t afford me’, which is true; I always remember the dirty cuffs of the legal aid lawyer whom I once had the misfortune to help me out of a fix when I reached, as it were, my end of Act Two Dark Point. (In point of fact, the lawyer behaved professionally, but he clearly did long hours in the shirt, travelling from one sweaty armpit of London to another.) Hank takes a call in court and learns that his mother has died. Now he has to go back for the funeral. At this point, I was expecting him to pick up Zach Galifianakis on the way, but we’ve already had DUE DATE. (And where is Big Zach anyway? He hasn’t been in a movie since his blink-and-you’ll-see-it cameo in MUPPETS MOST WANTED.)  Instead, he has to explain to a little girl (his daughter?) that he is going to the Mid West and you don’t want to go there because the internet reception is terrible.

So Hank’s car pulls outside the family home, and who should greet him with a frosty disapproving look but his dad, the Judge (Robert Duvall). Hank doesn’t call him ‘Dad’ but ‘Judge’ and we know he has been judged in his time and found wanting.

Where do you think the film is going to go? For a brief moment, we think we’re in AUGUST: SAUSAGE PARTY territory (that’s a Tracy Letts family saga crossed with a Seth Rogen comedy). But no, the Judge is under arrest. His car was involved in a fatal hit and run and now he faces a murder charge. This is the one case where Hank will defend a (possibly) innocent man and the prosecution lawyer (Billy Bob Thornton) is even nastier than he is. Vera Farmiga is on hand to remind Hank that he was once a promising idealistic lawyer until he was swallowed up by the big city.

At this point we get the title and whizz-bang credits. Here are the options of what could happen:

1)      Duvall’s character is guilty, but Hank gets him off; he changes because he knows he should only defend the right sort of case;

2)      Duvall’s character is guilty, but Hank doesn’t get him off; he learns how to lose a case and that he needs to defend more innocent people;

3)      Duvall’s character is innocent and one of the other family members is guilty (say Vincent D’Onofrio); the father was willing to take a hit for his son for the sake of the man’s family; Hank ensures his brother goes to jail;

4)      Duvall’s character is innocent and he has been set up by a family of a felon whom he sent to jail; Hank gets him off and ensures the perpetrator is arrested;

THE JUDGE (a Warner Bros release) opens in the autumn; I’m guessing PG-13