TV Shows of My Childhood

Remembering my childhood years always put a smile on my face. This is the stage where everything is so simple and the responsibilities are not that heavy unlike that of an adult. I was lucky to have an amazing childhood that is full of life and color. All thanks to my parents and friends who were there throughout my unforgettable and happy journey.

One of the unforgettable experiences I had when I was a child was watching kid shows. As a kid, I had too much free time that watching television was an everyday routine and after that I can go out and play. I even had experienced watching on a black and white TV because it was our first ever TV. So nostalgic!

Here are the children shows I watched in no particular order.

How I miss those twin bananas B1 and B2 and their adventures. Originally an Australian kid's show from year 1992, it gained fame and was shown from different parts of the world including my home country Philippines. It was first aired in the Philippines in year 1998 and already been translated to Filipino language. I remembered waking up to this show. As a child, it was really entertaining and I love the characters.

Up to this date, I am still familiar with their catchphrase whenever they thought of an idea. The twin bananas would ask each other. B2 would first say "Are you thinking what I'm thinking,B1?" or in Filipino "Naiisip mo ba ang naiisip ko B1?" and then B1 would answer"I think I am,B2!" or as translated in Philippines language "Palagay ko nga, B2!". Although it has been more than a decade since I watched this show and I don't remember most of the stories in every episode, the joy i got from watching them was still there. By just looking at their pictures I still can feel the fun they brought in my childhood. 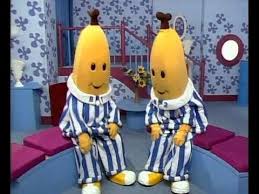 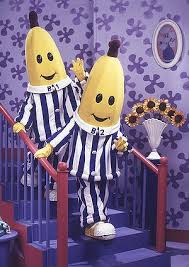 I still remember their names because they sing it in every episode. (Tinky-Winky, Dipsy, Laa Laa and Po) 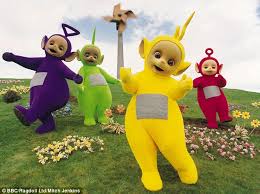 Who wouldn't remember these four colorful almost alien-like mascots? Or are they more like cute colorful monkeys? I still don't know what they are, I just know that they are called teletubbies.

This children's show came from United Kingdom and released on March 31, 1997. Meanwhile, this was premiered in the Philippines on 1999 and said to be the competition for Bananas in Pajamas, a kid show I mentioned above.

These four teletubbies live in an underground shelter that can be access through a hole at a top of a hill (i think, not really sure) But the four mostly play in a green plain with many flowers and a colorful landscape. It can also be seen a sun with a baby's face giggling during the introductory song of the show.

3. Bear in the Big Blue House

I love the “Goodbye Song” of this show where Bear sings with Luna, the moon. There is something about the song that made me emotional.

On October 1997, this show made its appearance in the American television where it originated. I can't quite remember when it was shown in the Philippines, all I know is that it is what I watched when I was still a little girl. The story centers on Bear's life together with his friends in the big blue house. Their adventures have many values on them such as sharing gifts, working together with friends, developing proper social interaction and many more. 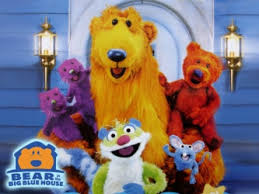 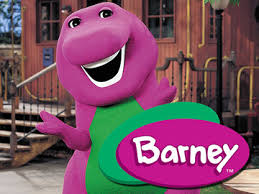 Who wouldn't remember Barney the purple dinosaur? He always sing that "I love you song" Barney just loves everyone, I guess.

Barney & Friends is an American children's television series aimed at children from ages 1 to 8, created by Sheryl Leach and produced by HIT Entertainment. It premiered on PBS Kids on April 6, 1992. The series features the title character Barney, a purple anthropomorphic tyrannosaurus rex who conveys educational messages through songs and small dance routines with a friendly, optimistic attitude.Production of new episodes originally ceased on September 18, 2009,[citation needed] although reruns of the series were still shown on several PBS stations in following years. From 2005 until 2015, reruns aired on Sprout. A revival of the series is set for a 2017 launch. (source: Wikipedia)

Until now his songs about love is still etched in the minds of the many people who watched this show.

Playing detectives looking for clues with Steve and his pet dog Blues. With his handy-dandy notebook, we followed Steve's adventures in finding clues that bear Blue's paw print in it which he left behind for us to discover. This children show started on 1996.

Blue's Clues was set in the home—the environment that was most familiar and secure for preschoolers—and looked like no other children's television show. Each episode was in development, from idea development to final production, for approximately one year. Writers created a goal sheet, which identified their objectives based on the show's curriculum and audience needs. Script drafts, once developed and approved by the show's creators and research team, were tested at public and private schools, day care centers, preschools, and Head Start programs by three researchers, who would narrate the story in the form of a storybook and take notes about the children's responses. The writers and creators revised the scripts based on this feedback. A rough video, in which the host performed from the revised script in front of a blue screen with no animation, was filmed and retested. The script was revised based on the audiences' responses, tested a third time with animation and music added, and incorporated into future productions. (source: Wikipedia)

The child who had lots of adventures with her pet monkey boots.

Last but not the least, Dora the Explorer, a friendly girl who taught us how to count in Spanish and followed her on her many quests in different destinations. This television series started last August 14, 2000. It felt like only yesterday and it has been sixteen years already. What?! This made me feel old, I guess.

Well, this story is about Dora's adventures as she visit various places. I remember how she made us answer dozens of puzzles and helped her with different obstacles she faced in order to get to the destination she wanted. After all that constant staring on the television, her waiting for us to answer her questions, yelling "Swiper No Swiping" a couple of times and  many more, we were able to make it. Then we sang the "We Did It" song, such a wonderful and hilarious memory. 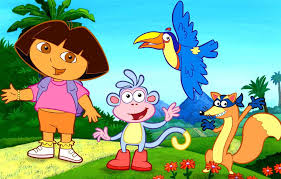 Moreover, I think what really made these children shows stuck in my mind are their catchy songs. Reminiscing childhood and these shows made me appreciate the gift of life. It felt like only yesterday and how I wish to go back to that time of my life. But life doesn’t works like that. You had to move forward, appreciate it and make memorable memories along the way. 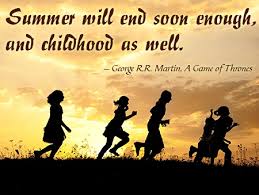 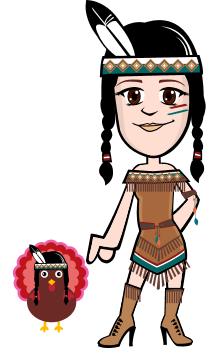