J and N Ferry boat manuevered to a docking station in Ubay Port, it has been almost four months since James and I had traveled to Bohol via Ubay, the last was a painful memory to remember because that was the same day when my operation was done. Anyways, I can see a huge change as the port's all wide with a few boats and ships docked.

We took a tricycle from the port to the public air conditioned bus stationed at the waiting area along Ubay Public market. At three in the morning, the bus started its engine and off went. After 45 minutes, we reached Guindulman, my home town.

I am simply narrating how we started our Saturday. That was a long day with lots of road trips. I seldom get home to Bohol because of work and when we do, we make sure that we get to make the best out of it. And there's no better way to do than going out of the house together with the entire family. This time, our plan were the following: 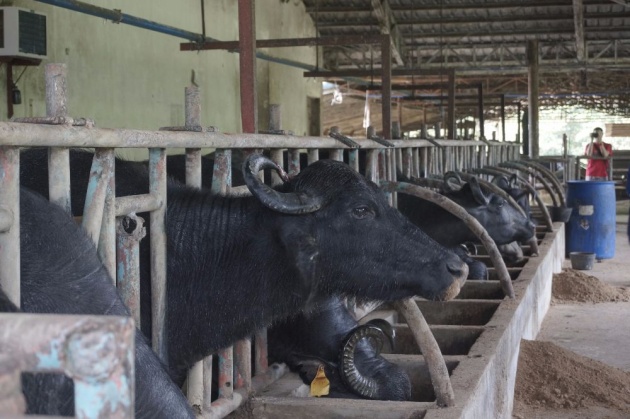 Planning is not hard since these places aren't new to us. We boarded brother's car, we were eight inside and started this road trip laughing and talking about anything abd everything inside the car.

As we were nearing Ubay, it rained and it was not a good sign. We all knew that this rain brings mud and pit along our way specially in Pilar where the glowing garden of Jardin Necitas is located. I made a blog about it earlier. Check it out.

As we came inside, we saw lots of other visitors eating and enjoying their carabao milk icecream of mango flavor. I was mouth watering already and would like to have my own cone too but my brother asked if they have their own tour for us to see how these milk were produced from the farm. 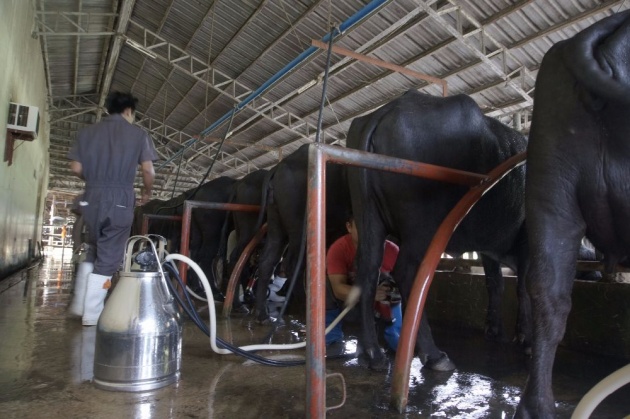 It was a perfect timing because their daily milking schedule falls at 2:30 in the afternoon and we reached there at two so instead of having ice cream, we thought we should check out their milk operation.

So head back to the car and went our way to their farm just one kilometer away from here. 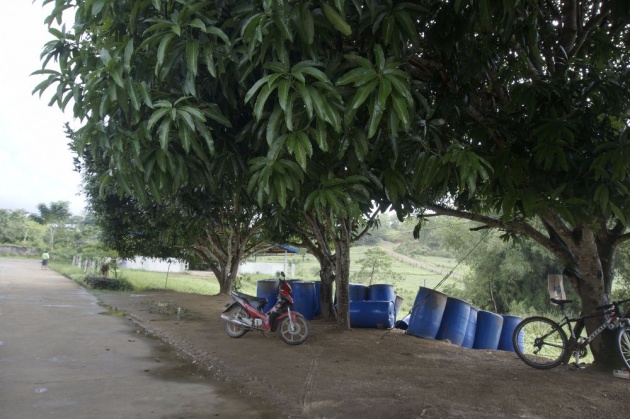 The car dropped to an un-cemented road, with maroon-ish path and trees lined up on the sides. This looked familiar to me, probably because of the past Educational Tours during my secondary years. But we aren't going to the Ubay Stock Farm instead, we were on our way to the Dairy Farm instead where the carabao milks are being produced.

At a Y-shaped end, we turned right to a narrower road but still has maroon-ish path. We were not quite sure if we were on the right way but we went ahead and followed our instincts as what the officer at the coop instructed us.

Finally, we reached a wooden gate full of barbed wires. Had a glimpse of a structure from afar which we believe would be the operation area. And we were not mistaken. 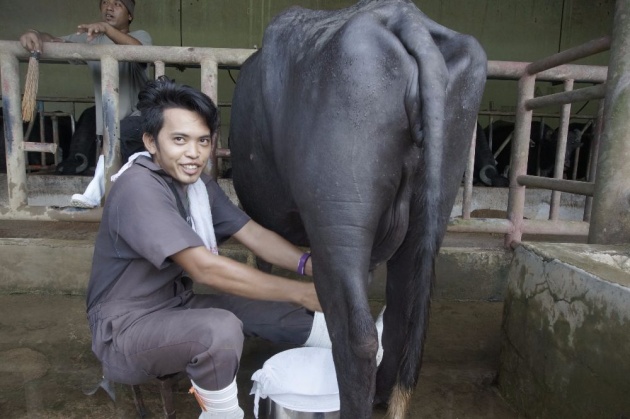 Kuya Alex was at a table, talking to another worker when we asked if we were at the right place, he nodded and started showing us the facility. There were 14 workers who are helping hand in hand to take care of the animals, breed them and even milk them.

Most of them were stay in at their staff house located next to the wooden gate while some go to their homes everyday. While their operations happen during the day, they still have specific workers who work at night to watch over the animals at their grazing area. 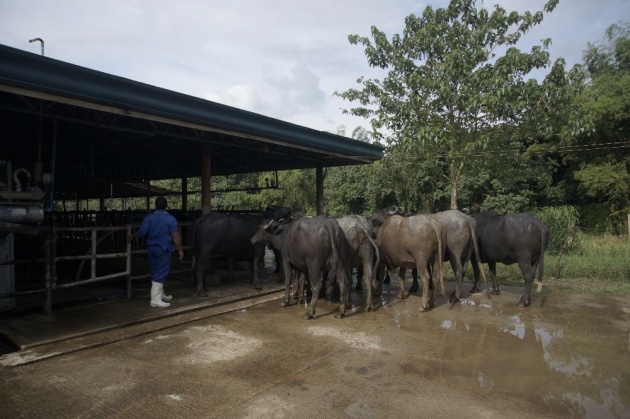 But aside from the current workers, there are also on the job trainees whom they have accepted to be trained in the farm before they go abroad to New Zealand to work in a milk production company as well in that country. As per Kuya Alex, the farm had been accepting lots of OJT students as a help to the Boholanos who are looking for greener pastures abroad.

I am definitely pleased with how the workers had been very accommodating and I can't thank them enough. I was even surprised that their tour is given for free! There was no entrance fee at all and we don't want to go away without giving them something to show our appreciation for the information and for showing us around the entire area. So we left them some cash for their snack even if they had refused it a couple of times. 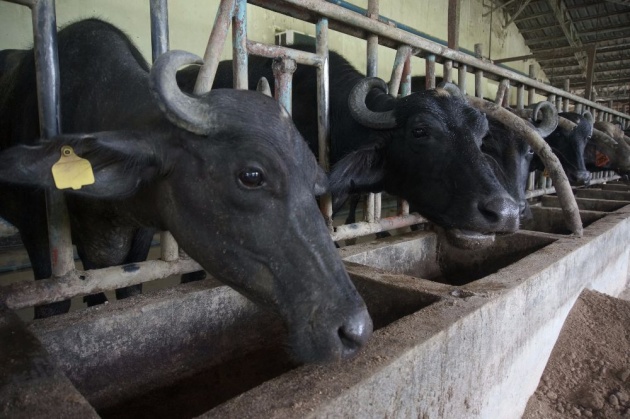 The Ubay Dairy Farm has been in production for almost 20 years now and they had been experimenting on the buffalo breeds. Originally, they had started with Murreh Buffalo which produces 4-5 liters of milk per day per carabao and then for a couple of years, they started cross breeding them with Bulgarian carabao which produces 5-6 liters a day per carabao. And they also produces great meat which resembles cow's meat however, they only do their culling once a carabao stops producing milk. 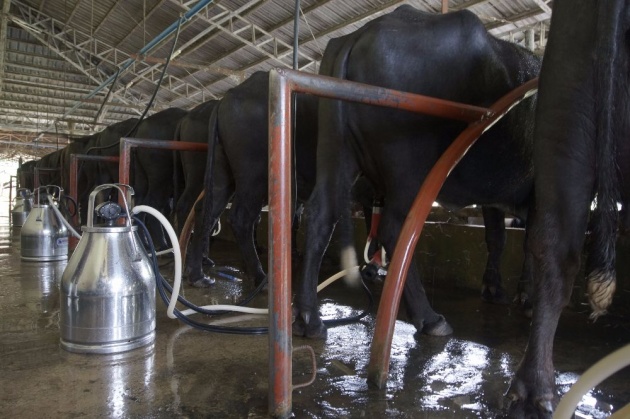 These carabao however live for at least 18 years. And so for their life time, they have been there to produce milk and calves as well for the farm. There were also times when these carabaos stopped producing and the staff has no other option but to sell them to the local farmers for their rice field works for at least Php 25,000 depending on the age of the carabao.

Good carabaos - this is how the workers would describe these creatures compared to the local water buffalo of the country. They show huge body structure yet they are not really that scary. Their eyes show their soft side and they are even scared of the people around specially when there are more than the usual number of heads surrounding them.

We got to also meet the albinos of the family as well. These are not really white ones but brownish in color. They still show the same body structure to those normal ones. Aside from Albinos, there were also other ones which has different eye colors, there was even one with white circles inside its eyes which was a bit scary at first but we were advised that it was part of their genes. 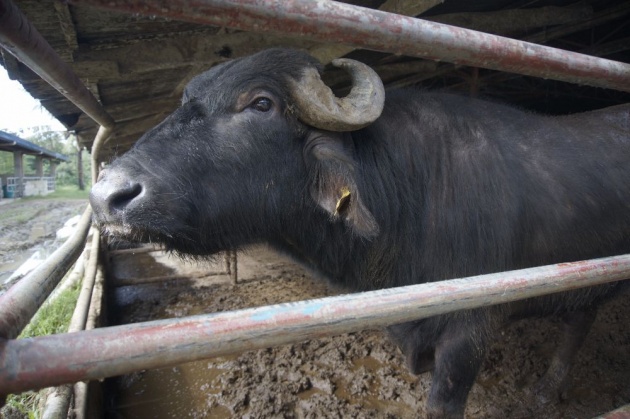 We got introduced as well to their main breeder, a pure Bulgarian Carabao or Buffalo and is the main producer of sperm to the mommy buffalo.

Currently, they have 80 all in all heads of carabaos while there are 26 full time milk producing ones who are also calving, in fact their calving season starts October until December every year. Each carabao gives birth to only one calf and pregnancy goes for ten long months! It's quite crazy to think about that long, much longer than human pregnancy though.

These carabaos are placed at a grazing area a distant away from the production area. They had been placed to different places to fed on growing grass and pasturage. This is one of the things that they had issue on because they don't want the carabaos to just eat feeds which they also produce but they would like them to eat green grasses and will only feed the supplementary feeds when they are doing the milking procedure.

Their supplementary feeds are also produced within the production area. They have machinery which can chop, grind and powderize the different leaves and root crops such as the cassava. No wonder why the feeds look brownish when they started feeding them. 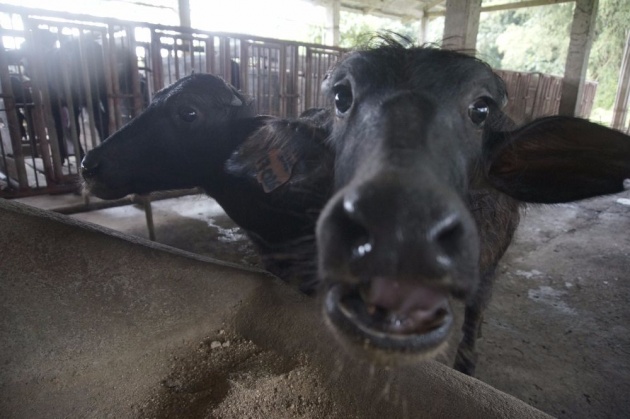 As we moved on to the next stall building where baby carabaos were situated, Kuya Alex explained that the calves will only get to stay with their mommy carabaos for five days. This somehow break my heart but I still understand this is a business and they have to make certain processes and standards to keep their business alive.

Colostrum is the most important thing that a baby should get from their mother's milk and that is available on the first 5 days after giving birth to their calves. So that explains why they only keep the calves with their moms for that specific time range.

After which they are kept on this calves area, they are just free to roam around, they have ad libitum amount of feeds. But they are still given milk by hand by the feeder workers. 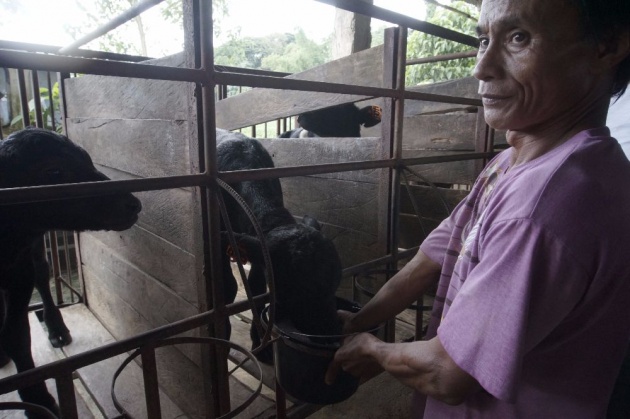 After 10 weeks, these babies will then be transferred to the grazing area until fully mature. The male ones however, I forgot to ask what happens to them after that but I am guessing, they'll be grown for meat and for farming assistance. But I was advised that there were some males that they leave behind to keep the females active and to tease them so they get easily fertilized.

I guess this blog is just becoming long, I will have to separate my personal experience on hand milking for the first time. Let me share that in the next blog. For now, hopefully this had provided you information about the life of the carabaos at the Ubay Dairy Farm or Carabao Farm.

Video credits: Jean Beltran-Figues via bitLanders.com A group of teachers flock the front of the Uba…

A preview of what we did at the Ubay Dairy Farm. Image credits: Jean Beltran-Figues via bitLanders.c…

Carabao Carabao is known as Buffalo to other countries. This is our national animal (Philippines). I…

Everybody of us have heard about the word cholesterol. When we are small kids , we hear this word qu…

Diseases in cattle – a close look at the cause, symptom and treatment options