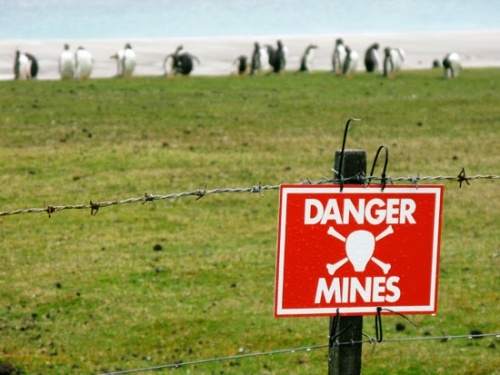 “South Atlantic remains perhaps as the last vestige of an empire in decadence. It is the last ocean controlled from Great Britain,” Argentina’s Héctor Marcos Timerman, Minister of Foreign Affairs, shot this verbal broadside at UN over the Falklands/Malvinas rising tensions. “What you won’t see here is the capital of this military power. The capital of this military power is 14,000 kilometres away from the area in conflict, from the Malvinas Islands. 14,000 kilometres away. From there it exercises control. The South Atlantic remains perhaps as the last vestige of an empire in decadence. It is the last ocean controlled from Great Britain.” Nuclear Rhetoric: The rhetorical battle crossed into the area of nuclear non-proliferation. “Our region is a nuclear-weapons-free zone. We are not going to accept nuclear armament in Latin America’s area of influence. Unfortunately, Great Britain is a signatory to the Treaty of Tlatelolco, but it has always expressed objections, therefore it does not uphold all the mandates of the Treaty of Tlatelolco. ” FM Héctor Marcos Timerman, Who is “Colonialist?” “They have called us colonialists. They have called Argentina colonialist. Anyone who knows history, even if you don’t cover Argentina regularly, but you must know history. To call Argentina colonialist is an offense to England, not to Argentina, because if there is a country that prides itself of a colonialist past, that country is England.” Minister Timerman of Argentina: “The Secretary-General supports dialogue, the General Assembly supports dialogue; the President of the Security Council supports dialogue. Well, we are just missing Great Britain. Thank you. Thank you very much.” Britain Responds: “The Falkland Islands have its own Constitution and the United Kingdom has no intention of imposing any change in the sovereignty status against the wishes of the people of the Falkland Islands. It is unfortunate that Argentina changed its Constitution in the 1990s to make it incumbent upon the Argentinean Government to obtain sovereignty over the Falklands.” Mark Lyall Grant, Permanent Representative of the United Kingdom to the United Nations. “On the nuclear issue nothing has changed in the British defence posture around the Falkland Islands. Clearly that defence posture, as I said, increased significantly after Argentina illegally invaded in 1982, ignored the Security Council resolution for them to withdraw and they had to be militarily defeated to persuade them to leave the islands. Obviously since then, for the safety and security and well being of the population of the Falkland Islands, we had to increase our defence posture.” It’s About Oil & Gas? “It may not be a coincidence that this new bout of rhetoric has come about after there was some suggestion that there may be oil and gas reserves in the Falkland Islands waters. But as far as we are concerned the Falkland Islanders have every right to exploit their economic resources in their own waters and if they do exploit these resources it’ll be for the benefit of the population of the Falklands, not for the benefit of the United Kingdom,” according to Ambassador Grant. No Bullets but Words, No Dying but Perhaps Some Diplomatic Lying? Good thing 30 years after original war over Falklands/Malvinas, there is no shooting and no is dying. Despite their harsh rhetoric, it is tribute to Argentina and UK if they do not allow it to translate into military conflict. Perhaps this is also test for as well as evidence of new confidence in the United Nations and its methodologies for conflict resolution. The United Nations Special Committee on Decolonization, a 24-member panel that discusses the developments in the 16 remaining Non-Self-Governing Territories, has repeatedly requested the Governments of Argentina and the United Kingdom to resume negotiations to find a peaceful solution to the long-standing sovereignty dispute. Argentina Foreign Minister Héctor Marcos Timerman, and UK Ambassador Mark Lyall Grant held consecutive press conferences at the UN end of this week to discuss Argentine President Cristina Fernández’s announcement earlier this week that Argentina would file a formal complaint at the United Nations (UN) regarding the United Kingdom’s militarisation of the South Atlantic and the issue of the sovereignty of the Falkland Islands (Malvinas). Argentina has alleged that the special nature of the question of the Malvinas Islands derived from the fact that the United Kingdom had occupied the islands by force in 1833 and ousted the Argentine population and authorities there, replacing them with settlers of British origin. Natives Win – Penguins Lose? The UK in turn is alleging that the Argentine rekindled rhetoric over the Falklands/Malvinas due to domestic politics, oil and gas. UK Ambassador claimed though such energy reserves would benefit the Falkland Islanders rather than London. If that’s true and with it’s small population, Falklands/Malvinas could become Qatar in South Atlantic and afford to have two names or even more. The most likely losers in the new Falklands/Malvinas debate though could be nature including the penguins who would potentially suffer broad consequences from oil/gas exploration and are still dealing with effects of last conflict, including minefields – Photo Courtesy of mentalfloss.com. By Ambassador Muhamed Sacirbey – Follow @MuhamedSacirbey Facebook = Become a Fan at “Diplomatically Incorrect” Twitter – Follow us at DiplomaticallyX War Crimes Justice Channel - diplomaticallyincorrect.org/c/war-crimes-justice

This penguin figurine are charming, friendly and they have a natural design. So just put all your ma…

Maradona expresses sadness at being sacked by Al Wasl

COPA AMERICA Football is the most popular sports and populist, does not see caste status, high state…