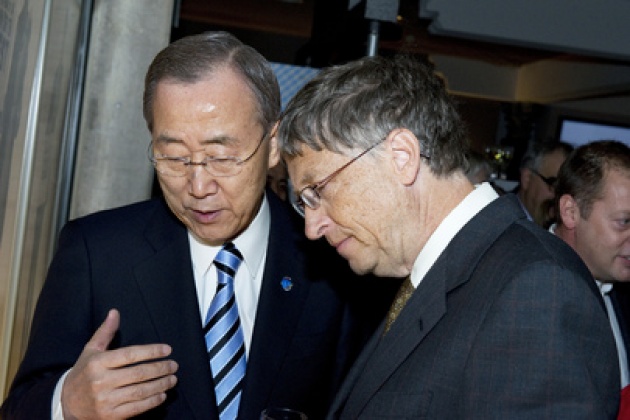 “Where the world financial crisis has brought about the loss of millions of jobs, socialized private debt burdens and now risks causing significant human rights regressions through wide-ranging austerity packages, a financial transaction tax (FTT) is a pragmatic tool for providing the means for governments to protect and fulfil the human rights of their people,” said the Special Rapporteur on extreme poverty and human rights, Magdalena Sepúlveda.Estimates from the Office of the High Commissioner for Human Rights suggest that at its lowest rate the FTT would yield about $48 billion across the Group of Twenty major economies, with higher rates offering up to $250 billion per year to offset the costs of the enduring economic, financial, fuel, climate and food crises. The call for a financial transaction tax reflects earlier studies/calls supported by many political leaders in Europe, NGO’s and even business leaders as Bill Gates, (PhotoAbove with UNSG Ban Ki-moon). See our Blog for Film - “Why Financial Tax?”. The greatest opposition though comes from the US and UK where not so coincidentally the largest number of financial transactions occur.

“EU countries must take bold leadership now to pave the way towards what should eventually be a global FTT,” the UN experts urged, welcoming recent EU proposals to implement the financial transaction tax across the Eurozone. Countries such as the Republic of Korea have implemented similar taxes in non-discriminatory ways to raise resources to achieve the right to development.

The FTT, experts argue, would also help stabilize financial markets by discouraging speculation, and therefore mitigate the type of volatility which led to the 2008 financial and food crises, (a perspective we believe has not been given enough significance in the debate). “Food prices have twice spiked dangerously over the past five years, and could easily do so again. The FTT will likely reduce hot capital flows that fuel speculation, drive price instability and wreak havoc on the right to food worldwide,” stressed the Special Rapporteur on the right to food, Olivier De Schutter.

“A global FTT is not a silver bullet, but it would help relieve sovereign debt load stemming from the financial crisis, shift the burden from ordinary citizens to the private sector which caused the crisis, and significantly enlarge government fiscal space for spending on desperately needed economic and social rights programs,” according to Cephas Lumina the Special Rapporteur on foreign debt and human rights. The FTT would provide governments with an opportunity to act on their commitments to sustainable development and to take a step to advance development and include marginalized populations, said the Special Rapporteur on human rights and international solidarity, Virginia Dandan. “When the financial sector fails to pay its share, the rest of society must pick up the bill,” Ms. Sepúlveda emphasized. “It is high-time that governments re-examine the basic redistributive role of taxation to ensure that wealthier individuals and the financial sector contribute their fair share of the tax burden.” Also see our Blog for Film Report – “Financial Tax a Reality”.

My name is Manzoor Ahmed. I am from Rahim Yar Khan, Punjab province of Pakistan. And I am going to t…