United Nations Pays Tribute to Children of the Holocaust 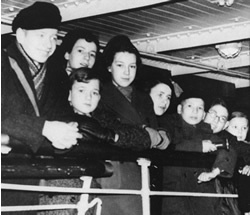 On January 27, 2012, the United Nations paid tribute to the children of the Holocaust.  More than 1.5 million Jewish children perished at the hands of the Nazis and tens of thousands of others became orphans, were abused and suffered sickness and hardship.
My mother-in-law Yetty was one of the lucky ones.  At nine years old, Yetty with her 14-year-old sister Selma, escaped Poland on the last Kindertransport to England. Yetty's oldest sister was not allowed entrance on the boat - at 17 years old she was not permitted. In the months between the Kristallnacht Pogrom in 1938 and the beginning of World War II, kinderstransports took 10,000 Jewish children without their parents from Germany, Austria, Czechoslovakia, and Poland to England where they were placed in orphanages and foster families.  Yetty never saw her parents or sister again.  They all perished in Poland.
It is astounding to think of the millions of lives lost during the Holocaust.  And for children of the Holocaust, the memories remain burned into them, whether they were in the camps, hidden from the Nazis by courageous non-Jews or sent away to foster families in England.  We must never forget.
http://webtvs.filmannex.com/WendySachs
-wendy sachs