US cadets injured in pillow fight at West Point academy

US cadets injured in pillow fight at West Point academy

A huge pillow fight involving cadets at a prestigious US military academy to mark the end of summer training left at least 30 soldiers injured.

At least 24 cadets were reported to have been left unconscious because pillows were stuffed with hard objects.

One cadet suffered a broken nose, while others had dislocated shoulders.

West Point academy said the fight was designed to build "espirit de corps". None of the injuries was severe and all cadets have returned to duty, it said.

Details of the injuries sustained in August emerged in The New York Times, which reported that video of the fight posted online shows crowds of yelling cadets, some wearing body armour as well as helmets, surging together in a central quad. 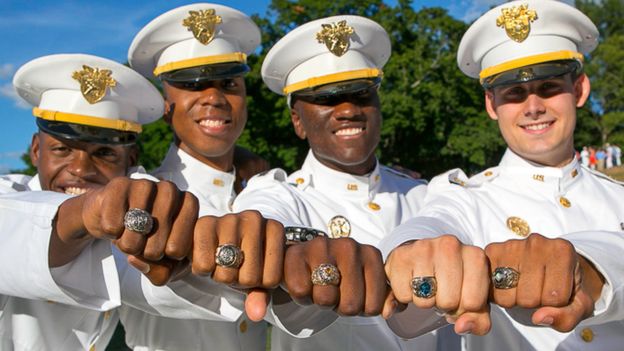 West Point is a publicly funded academy, where many of the US Army's top leaders are trained

Although pictures of the 20 August brawl have been circulated on social media, West Point did not confirm it took place until recently.

The annual night-time event has been described as a harmless way of blowing off steam at the end of a gruelling summer of training.

But this year's event seems to have been a little over-exuberant, with pillow cases reported to have been stuffed with hard objects, thought to have been helmets.

West Point superintendent Lt Gen Robert Caslen said in a statement: "While these spirit events do occur, we never condone any activity that results in intentional harm to a teammate.

"Although the vast majority of the class appears to have maintained the spirit of the event; it is apparent that a few did not."

Military police were investigating the incident and would take appropriate action when the inquiry was complete, he added.

There are no plans to end the annual pillow fight, which has taken place since at least 1897.