US Jobs, Is it Enough? 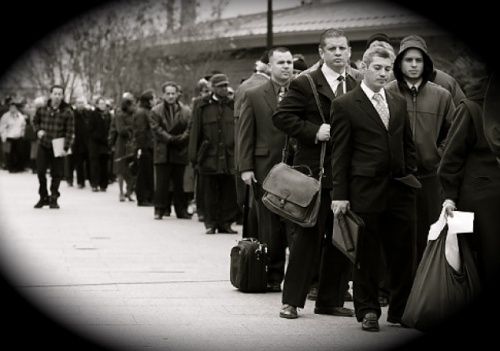 February hiring again increased by 200K plus, but the increases are barely enough to keep pace with population/new job seekers in market. This same trend now has been continuing for several months, and adjustments to previous months figures show an even more positive employment picture. HOWEVER, the current increases of around 200K per month would not make hardly any dent in the unemployment rate (around 8.3%), underemployment nor in bringing back into the economy those who have given-up on job hunting. The US will need a sustained increase of 400K-500K per month. Republicans remind that such recovery was ongoing by time Ronald Reagan was being reelected for his second term. Still, the employment numbers probably will be good enough to reelect President Obama, although perhaps more because of the ongoing political food fight between Republican Presidential candidates that looks ever more like Primary Race “Animal House.” What is most misleading though about the current employment trend and numbers are critical qualitative considerations in the character of America’s egalitarian society and what a job is. The wealth gap is bigger than ever and the “safety net” is under attack from right and showing signs of tattering. Furthermore, jobs are ever more bare of health and retirement benefits that were standard just a decade or two earlier. In fact, the word work is ever more likely to be associated with a consulting/independent contractor opportunity rather than a permanent job with benefits. Part of this is changing nature of work and skills needed (tech & social media are becoming indispensible). Part is global competition, but also the more profit driven focus of corporate America. “Greed is Good” has not gone out of fashion, but is strutting itself on the fashion runway that Wall Street profits have become. Just as evidence: Corporate profits and equity prices have recovered much more handsomely than either the US consumer or employee. See our Video for Blog – “Another Positive Jobs Report” - diplomaticallyincorrect.org/films/blog_post/another-positive-us-jobs-report/44968 Read the two sides of the glass half full or half empty Argument from beginning of January 2012 re last (December 2011) job report at our Video Blogging Website: Glass Half-full - “US Economy & Obama on Rebound, Again?” - diplomaticallyincorrect.org/films/blog_post/us-economy-obama-on-rebound-again-by-ambassador-mo/43431. Glass Half Empty - “Employment Report Not as Good as it Looks” (Incorporating analysis of Daniel J. Mitchell from Cato Institute site) - diplomaticallyincorrect.org/films/blog_post/counterclaim-employment-is-not-as-good-as-it-looks-by-ambassador-mo/43434 For many further current news event articles related to Libya, see our popular video blogs at “International Financial Crisis” Channel - diplomaticallyincorrect.org/c/international-financial-crisis By Ambassador Muhamed Sacirbey – Follow @MuhamedSacirbey Facebook = Become a Fan at “Diplomatically Incorrect” Twitter – Follow us at DiplomaticallyX