In this post, I'll be detailing the pre-production phase of my 4th short film project "Uyir"! I was able to complete this phase pretty quickly, but since I already had the vision of the film in my head for a couple of years now, I didn't need to spend a lot of time on this. I didn't attempt to make this film earlier since I didn't have the skills and techniques to pull off a film like this but since I've now had a bit of experience, I'm hoping I can pull this film off. Conceptually, I feel a bit more confident that this story works and conveys a more powerful message than any of my previous short films. But conceptually is one thing, and going out there and seeing it is another..

The two most important goals that I'm looking to achieve with this project is good story and good character animation. Although, I feel the story is now locked down tight, I'm still not sure whether the screenplay is good enough. This can help viewers really understand what's happening on screen. Can they relate to what the characters are feeling? Is a scene in the film confusing to the viewer? Especially since this is a short film, a confusing scene can throw off the viewer blunting their viewing experience. This film won't have dialogues either, so that challenge is nearly doubled. So it's really important that I get the screenplay down tight. This is something I've also learned from my previous ventures and had I spent more time on the screenplay, I felt I could have delivered a really good story. To briefly describe the plot of the film, the old man enjoys his life when he is suddenly kidnapped by masked men who have broken into his house while the daughter is left behind. He attempts to break out of where he is kept hostage and tries his best to re-unite with his daughter. It will generally be more violent than any of my other stuff (and certainly not comedically violent like the "What To Do" series).

The latter goal, character animation, is also very important. This is admittedly one of my main weaknesses. I have to admit, I generally tend to make awkward and stiff looking animations. I'm still baffled how Pixar and Dreamworks pull off their character animations to the level that is extremely believable. I wish I could reach their level but I know I think I'm far off. Maybe one day, but for this short film, I'll focus on animating to the best of my own ability.

I guess enough of my ranting and on to the current progress:

I spent about a week drawing concept art for the film. I drew both the old man and the daughter on a piece of paper. This allowed me to be as free as I want and define the features I wanted for the characters.

Here are my early drawings of the old man which was then later scanned to my PC. 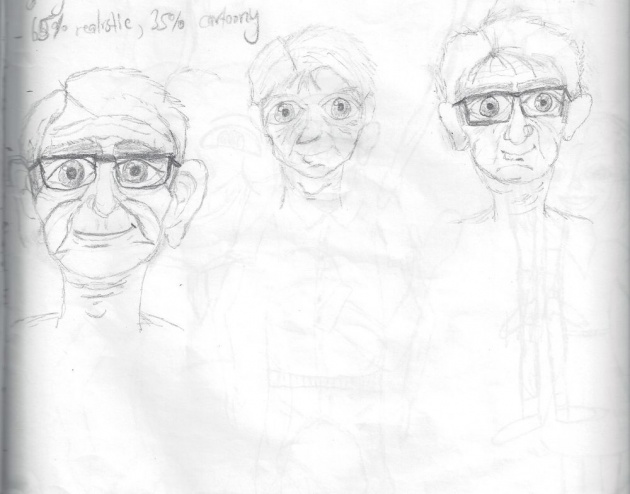 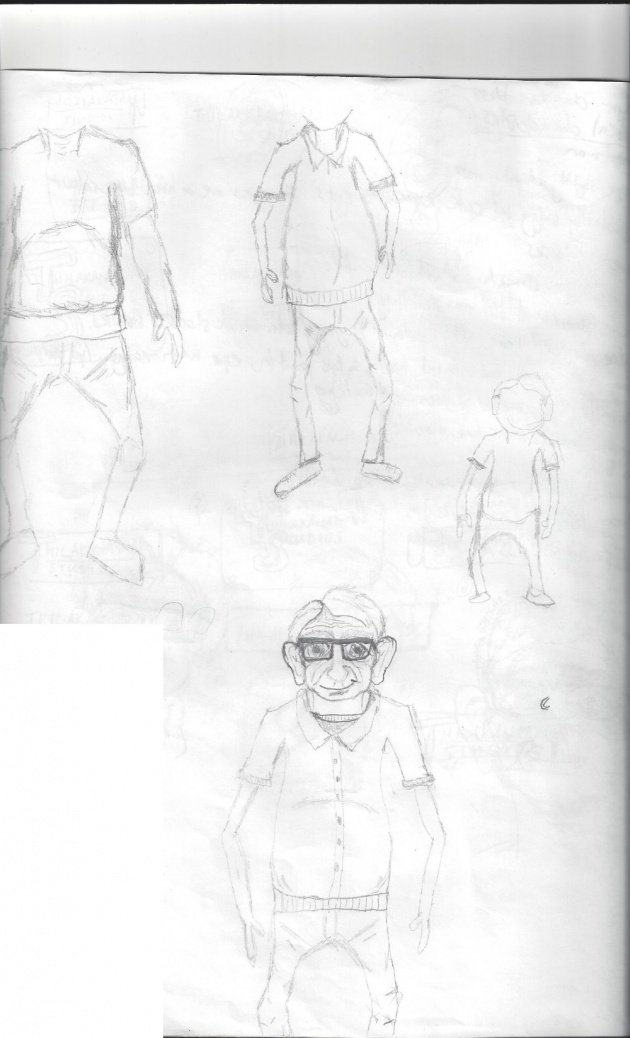 Here are my early drawings of the daughter which was also scanned and saved as a JPG to my PC: 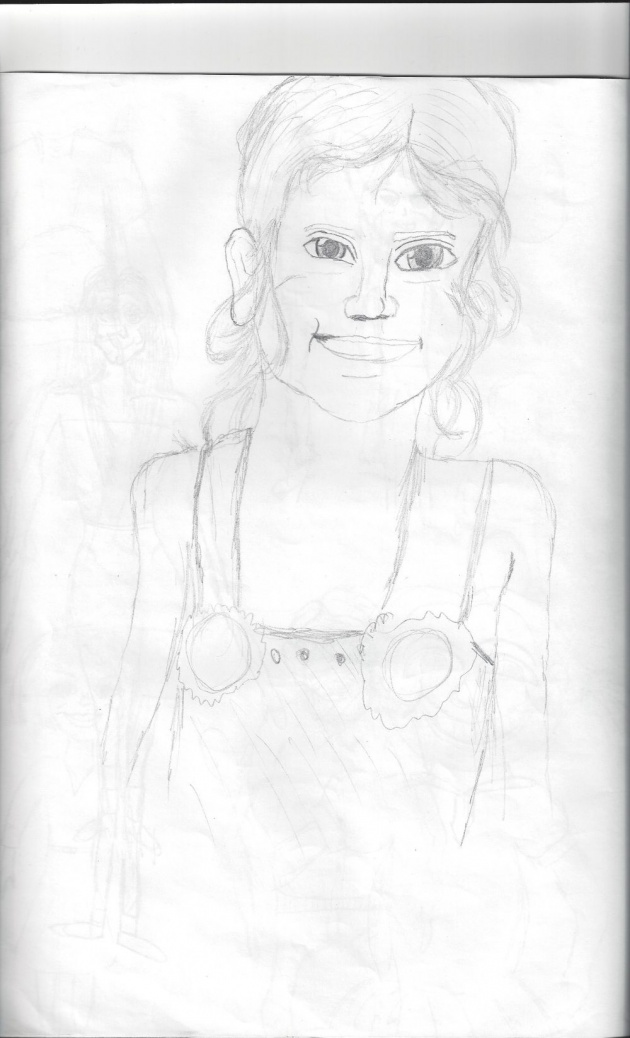 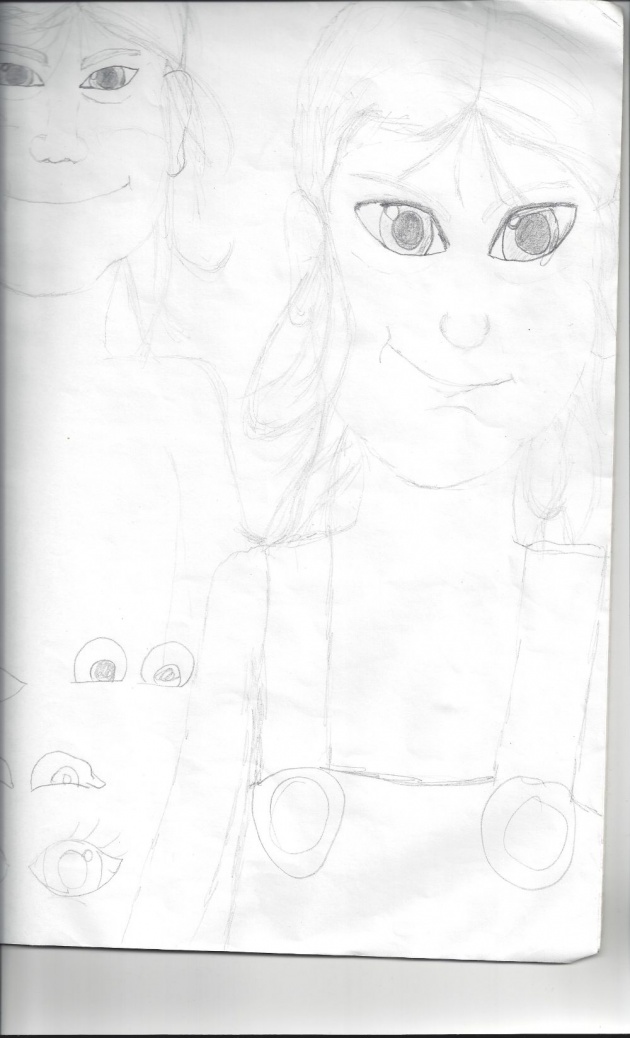 And these are the character traits I wanted for her:
- About 10-11 years old
- Cute, slightly mischievous (did I spell that right?)
- Longish hair, with ponytail (depends on how well I can get hair simulation running)
- Small nose
- Cute, expressive brown eyes (similar to the old man)
- Wears a dress, possibly blue coloured but can change with the story
- Fairer skin tone compared to the old man
- Slightly chubby
- 65% realistic, 35% cartoony

Once I picked out the drawings I liked, I then imported the images into GIMP (the open-source version of PhotoShop) and re-traced the images. To re-trace, I used a Wacom Bamboo Pen and Touch Tablet. This provides more drawing control compared to a mouse and plugs into your computer via USB interface. Generally though, it is very difficult to draw using a mouse since you don't have the level of control compared to drawing on paper. The Wacom Bamboo is about $80 or so US dollars and allows you to draw on a computer similar to drawing with a pen on a sheet of paper. Even better ones can be pricey with the Wacom Cintiq being priced somewhere in the thousands but this provides full drawing control down to the pixel. For my purposes though, I was happy with the Bamboo as it did what I needed it to.

Below is the result of the re-tracing for both the old man and the daughter. Additionally I added in an extra layer to indicate some highlights and shadows (more apparent in the eyes). 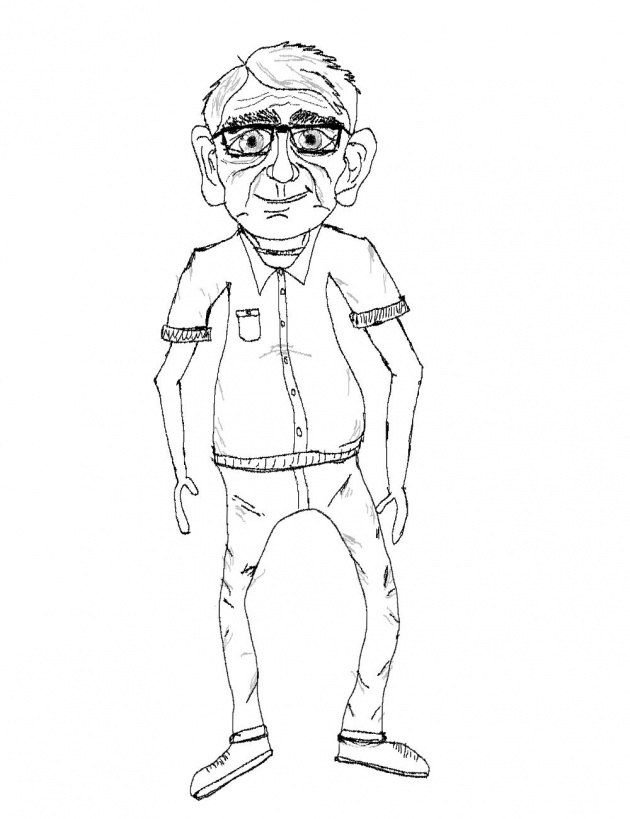 These are the concept drawings I went with and this provides a first look of what the characters might look like. Clearly, my drawing skills aren't the best in the world but at least they'll guide me in the modelling stages. In the second part of this post, I'll detail the storyboarding and the animatic.