I've now made the full and raw exam scene available online. This should give an idea of how the animation of the final film will look. It's not Pixar, but personally I feel it is the best I have ever done. Prior to starting the project, I was very confused about the art of character animation. I took it upon myself to learn how the professionals do it, by watching many Youtube tutorials and buying workshop CDs. I'm not following 100% based on the tutorials, which is perhaps why the animations may lack a bit of depth and life. I mainly work with playing around with key frames and haven't touched any f-curves or anything like that. Partly, I still feel a little bit unconfident, but hopefully it will improve with a bit more experience.

In this scene, Vetri is undertaking his final exams, feeling nervous whether he has studied enough. The lecturer signals the start of exams, after which all the students write away. Vetri though, feels daunted just by looking at the questions, but later has a stab at it. By the time the exam finishes he is surprised. The shot ends off with a close up zoom of Vetri's face, hopefully indicating to the viewer, that he wasn't happy with his answers. 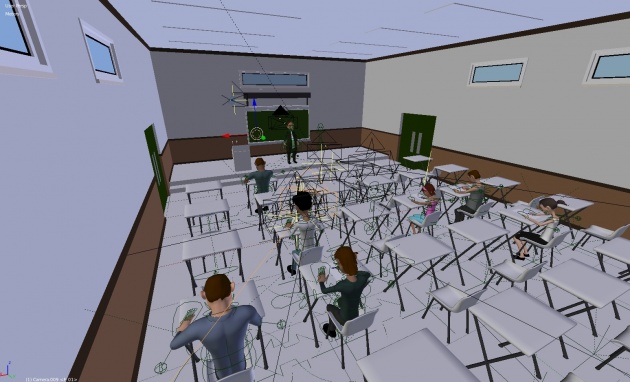 Generally, the scene wasn't too hard to pull off, just a little repetitive. Especially having to animate each of the students. I may have gotten a little lazy, which is why the hall isn't filled with many students (also had to take into account PC memory).

I chose to release this scene, as it will showcase the kind of animation style that will be present in the film. Luckily, there are plenty of scenes in the film that have come out more 'lively' and enjoyable, but I've decided to leave those scenes for the final film experience!