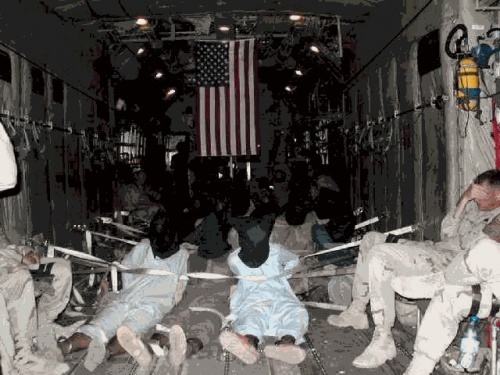 Held by US forces in Afghanistan and Iraq and having been blocked in US Courts on Assertion of “no standing” - not being US Citizens protected by US Constitutional safeguards - 3 Afghanis and 3 Iraqis are petitioning the Inter-American Commission on Human Rights (IAHCR). International and US Constitutional safeguards not having been recognized as applicable in US Courts to these Alleged Victims, the ACLU is now helping the "Petitioners" pursue alternative forums. The petition to the IAHCR does not seek direct damages. As the equivalent of a legal complaint, the action seeks an independent investigation and an apology for the violation of the Rights of the 6. The case does move the rule of law and international legality one step forward by denying Governments technicalities (defenses as sovereign immunity and no-standing) to hide from grave violations of international and/or domestic law. Also See our Blog for Video –“UN Human Rights Chief: “Guantanamo is Entrenched”- diplomaticallyincorrect.org/films/blog_post/un-human-rights-chief-guantanamo-entrenched-by-ambassador-mo/43989 Below is the Full ACLU Press Release & further links are Provided - www.aclu.org/human-rights/afghans-iraqis-tortured-us-military-bring-case-international-human-rights-tribunal By Ambassador Muhamed Sacirbey – Follow @MuhamedSacirbey Facebook = Become a Fan at “Diplomatically Incorrect” Twitter – Follow us at DiplomaticallyX See more at our Popular Video Blogs & Current News Event Articles at diplomaticallyincorrect.org/c/war-crimes-justice FOR IMMEDIATE RELEASE CONTACT: (212) 549-2666; media@aclu.org NEW YORK – The American Civil Liberties Union today filed a petition against the U.S. with the Inter-American Commission on Human Rights (IAHCR) on behalf of three Afghans and three Iraqis who were tortured while held by the American military at detention centers in Iraq and Afghanistan. They were part of a group of men that in 2005 sued then-Defense Secretary Donald Rumsfeld and three senior military officials in federal court for their torture and abuse. That case was summarily dismissed on immunity grounds before reaching the merits. The petition is the equivalent of an international legal complaint. It asks the commission, an independent human rights body of the Organization of American States, to conduct a full investigation into the human rights violations and seeks an apology on behalf of the six men from the U.S. government. Between 2003 and 2004, the men were detained in U.S.-run detention facilities in Afghanistan and Iraq, where they were subjected to torture and other cruel, inhuman and degrading treatment including severe and repeated beatings, cutting with knives, sexual humiliation and assault, mock executions and prolonged restraint in excruciating positions the petition charges. None of the men were ever charged with a crime. “I think that I and the many others who suffered unfairly at the hands of the American government deserve justice,” said petitioner Ali Hussein, an Iraqi who was a 17-year-old high school student when he was detained and abused by American soldiers. “We want America to admit that what happened to us was wrong and should never be allowed to happen again to anyone anywhere.” Hussein, who is now a law student, was shot in the neck and back before being arrested. He said that military personnel refused to provide him medical care for several hours, and when the bullets were eventually removed the procedure was done without anesthetic. He was then denied food, water and pain medication for almost two days after he was shot. The petition states, “The U.S. government’s own reports document that the torture and inhumane treatment that Petitioners were subjected to was not aberrational; on the contrary, it was widespread and systemic throughout the U.S.-run detention facilities in the two countries. These same reports also document that the torture and inhumane treatment of detainees were the direct result of policies and practices promulgated and implemented at the highest levels of the U.S. government. Despite these reports and Petitioners’ and other detainees’ credible allegations of torture and inhumane treatment, the U.S. government has failed to conduct any comprehensive criminal investigation, has not held accountable those responsible, and has not provided any form of redress to Petitioners and the many other victims and survivors of U.S. torture and abuse.” “Since a remedy for these men has been denied in American courts, these six courageous men are seeking to hold the U.S. government accountable on the world stage,” said Steven Watt, senior staff attorney with the ACLU Human Rights Program. “No high-ranking government officials have yet been held to account for their actions, and this petition seeks to do just that and to ensure that the government respects basic human rights, including the right of everyone to be free from torture and inhumane treatment.” In the federal case, Ali v. Rumsfeld, a district court dismissed on the grounds that constitutional protections do not apply to foreigners in U.S. custody in Afghanistan and Iraq and that the American officials were immune from lawsuits stemming from actions taken “within the scope of their official duties.” In his March 2007 ruling, Judge Thomas A. Hogan of the U.S. District Court for the District of Columbia called the case “appalling,” and noted that “the facts alleged in the complaint stand as an indictment of the humanity with which the United States treats its detainees.” The D.C. appeals court upheld the dismissal last June. Ali v. Rumsfeld is one of several lawsuits in which victims of torture have been shut out of American courts. Others cases include Mohamed v. Jeppesen Dataplan, a lawsuit against a flight logistics company that facilitated CIA “torture flights” across the globe; El-Masri v. Tenet, a lawsuit brought by a man abducted and sent to a secret CIA prison in Afghanistan; and Padilla v. Rumsfeld, a lawsuit brought by a U.S. citizen who was unlawfully detained and abused on U.S. soil. That case has been appealed. In addition to Watt, ACLU Human Rights Program Director Jamil Dakwar is an attorney on the case. The petition to the IACHR is available at: www.aclu.org/files/assets/iachr_sabar_petition.pdf Detailed summaries of the abuse suffered by the petitioners are available at: www.aclu.org/IACHR-torture-summaries Information on the dismissed federal lawsuit against Rumsfeld is available at: www.aclu.org/national-security/ali-v-rumsfeld-case-profile