Victory of Pakistan against Australia.

This time i am going to talk about victory of Pakistani team against Australia in Dubai. 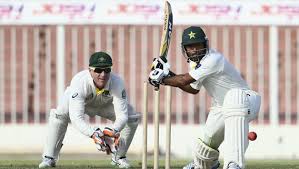 DUBAI: Pakistan handed a 221 runs defeat to Australia in the first test match at Dubai International Cricket Stadium on Sunday.Pakistan Captain Misbah-ul-Haq won the toss and put his side into bat.The green shirts scored 454 runs in their first innings thanks to centuries scored by Younis Khan and Sarfaraz Ahmed.

Sarfaraz Ahmed was the top scorer for Pakistan in the first innings as he made 109 runs from 105 balls whereas Younis Khan scored 106 runs from 223 balls.Asad Shafiq made 89 runs, Misbah-ul-Haq scored 69 runs whereas Azhar Ali contributed 53 runs for their team.Aussie pacer Mitchell Johnson took three wickets in the innings whereas Steve O’Keefe and Nathan Lyon took two wickets. Peter Siddle and Steve Smith each took one wicket as well.

Australia could only put up 303 runs on the scoreboard as opener David Warner was the only batsman from the side who could provide any resistance to the Pakistani side as he made 133 runs for the side.Yasir Shah took three wickets in the innings whereas Zulfiqar Babar and Rahat Ali grabbed two wickets each. Mohammad Hafeez and Imran Khan each took one wicket as well.

The green shirts, with a lead of 151 runs, declared at 286/2. Younis Khan scored his second century in the match as he remained unbeaten 103 runs whereas Ahmed Shehzad scored 131 from 233 balls.Chasing 438, the visitors were all out for 216 runs. Mitchell Johnson was the top scorer for the side with 61 runs from 127 balls whereas Steve Smith made 55 balls 175 balls.David Warner made 43 runs for his side and Peter Siddle 15 runs.

Zulfiqar Babar took five wickets whereas Yasir Shah took four wickets in the inning. Imran Khan took the remaining one wicket.Younis Khan was named Man of the Match for his back to back centuries in the test matchThe second test match will start on 30th October in Abu Dhabi.