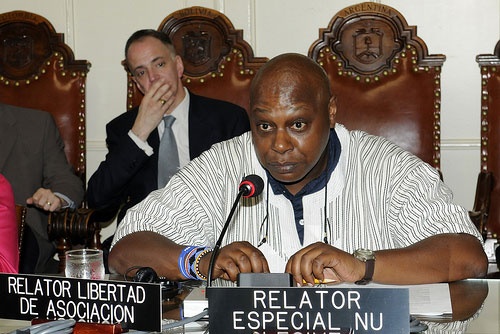 Switzerland’s proposed law authorizing heavy fines for protesters without official permission to demonstrate would have a “chilling” effect on the rights to freedom of assembly and expression. Fines of up to $110,000 for those without authorization to demonstrate would be authorized. “Such an amount is disproportionate and would have a chilling effect on the enjoyment of the rights to freedom of peaceful assembly and of expression,” said the UN Special Rapporteur on the rights to freedom of peaceful assembly and of association, Maina Kiai. Mandated by the UN Human Rights Council, special rapporteurs are charged with examining, monitoring, advising and publicly reporting on human rights situations in specific countries or territories, or on major phenomena of human rights violations worldwide. While not specifically Addressed, the proposed Geneva Canton Law could directly impact the United Nations second home in that city/country, and capability of global citizens to bring their issues grievances it the UN’s door/attention. The proposed law, which will be put to a canton-wide referendum on 11 March, also specifies that the beneficiary of an authorization to demonstrate may be denied a new authorization for up to five years if the protest in question led to any casualties or damages, even if he or she is not at fault. In addition, it grants authorities permission to ban assemblies in specific locations, such as city centers, and imposes an obligation on protest organizers to provide their own security personnel without which the authorization to demonstrate will not be given. “The exercise of fundamental freedoms should not be subject to a previous authorization by the authorities,” Mr. Kiai said, warning that the Geneva canton’s proposed restriction would “further dissuade” people from exercising their rights to express their views and opinions by means of peaceful assembly. “Switzerland is leading important initiatives with respect to the promotion and protection of the right to freedom of peaceful assembly,” he added. “The proposed changes to the law on demonstrations in the canton of Geneva are not in consonance with these positive efforts.”There has been increasing tendency by state authorities, including democracies to establish more barriers to public demonstrations - at least in part due to effect/success of Occupy movement. See more at our Popular Video Blogs & Current News Event Articles at diplomaticallyincorrect.org/c/war-crimes-justice By Ambassador Muhamed Sacirbey – Follow @MuhamedSacirbey Facebook = Become a Fan at “Diplomatically Incorrect” Twitter – Follow us at DiplomaticallyX UN Photo - Special Rapporteur on the rights to freedom of peaceful assembly and of association Maina Kiai. Photo: OAS/Patricia Leiva

Some weeks ago I went to Switzerland for first time and I had an awesome time in Lucerna, a very bea…