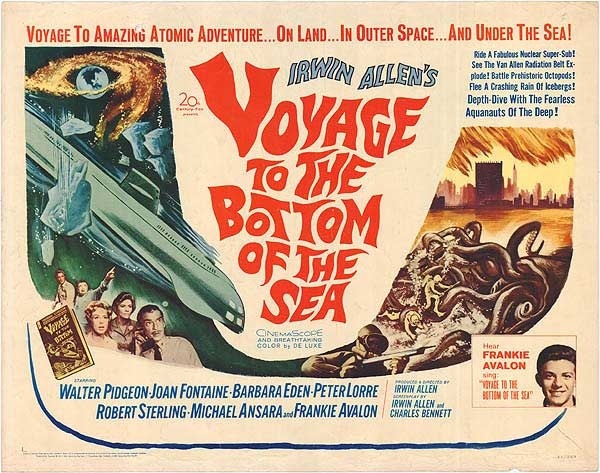 "Voyage To The Bottom of The Sea" (1961) attracted me because its cast included Peter Lorre, pre-"I Dream of Genie" Barbara Eden, Joan Fontaine and Frankie Avalon (?); and because of that poster! Was there REALLY going to be a giant squid and how bad would it look? Well, I was not disappointed and there's too much to say about this film than I allow myself in these blogs. Peter Lorre's first scene has him in a shallow pool, inside the submarine, gently 'walking' a shark around. What?! All of the actors played their parts great and when I looked up each one of them on good 'ol IMDB, what struck me was that these were professionals with the lowest number of acting credits with Frankie Avalon at 49 films (What the? Who knew?) and Regis Toomey (playing Dr.Jamieson) with 268 credits. A very well rounded cast indeed.

The film's director was Irwin Allen, who'd also directed "The Lost World" the year before. He started successful tv shows based upon the two movies and utilizing the movies' sets. Lots of people enjoyed the adventures of that crazy submarine with fins made to resemble that of a '61 Caddy. The Seaview, as it's called, is an atomic submarine doing some test runs in the Arctic. When giant ice boulders start hitting the sub, it surfaces to find the sky on fire, and a guy floating on an iceberg (played by Michael Ansara who would marry Barbara Eden after the film). So the story goes that we've done so much tinkering with the earth's atmosphere that we'd attracted the Van Allen radiation belt to encircle the earth and cook it up. At 2 degrees a day, it's 3 weeks to go til everyone's toast so the radical Admiral Nelson (Walter Pidgeon) pleads his case with the UN, with Lorre at his side (not sure if that was a good move!), there's a rebuttal and that's that. After a few days without contact, Adm. Nelson goes ahead with his theory of fighting the radiation belt atomic energy. Ha ha. Everyone on board ain't exactly down with the Admiral's plan so it's a rough, semi-mutinous journey to the exact spot for the launch.

Global warming is the real threat of the movie. The film gives us different viewpoints of different doctors (Joan Fontaine is a psychiatrist studying the sub's crew), those of the military in the crew, those of the government with the senator aboard and the UN, and lastly one religious voice in Miguel Alvarez, the iceberg survivor. I appreciate that someone in 1961, made a film that labelled global warming (or climate change) a real problem that we're responsible for. Sci-fi is a great genre for exploring our fears of newfound scientific discoveries and the film plays upon not only climate change, but submarine and atomic technology growth and the somewhat recent discovery of something called the Van Allen rendition belts. I think shooting an atomic missile at the radiation belt would be nutty in real life but hey, this was a big budget, major studio sci-fi film made to entertain and it did! It entertained this guy too over 50 years later! 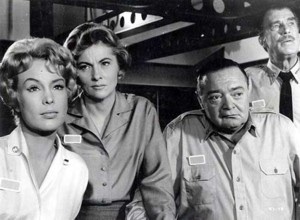