I'm excited to share the news that Director Wafa'a Celine Halawi's film 'We Might As Well' will be screened next week, Thursday August 23rd, 2012, at the opening night for the Lebanese Film Festival.

"We Might As Well' captured my attention when I was looking into the CINEDANS festival. The film is shot in a beautiful historical location in Beirut using stop motion and time-lapse cinematography.  Wafa'a and her team of gifted dancers nailed it. I encourage you to take a peek yourself below.

Take a look at this interview Wafa'a had in Cannes:

Wafa’a is a Lebanese/ French filmmaker currently living in Beirut. She started acting at age 5 and pursued an acting career until she directed her 1st film and became a filmmaker.

In 2004, Wafa’a graduated from the Lebanese American University in Beirut with the film Act I Scene 10. She then went to the New York Film Academy where the one-year program allowed her to direct various films, including Very Rough Draft as well as wining two commercial pitches, among which one for Stella Artois.

After directing commercials and corporate videos in West Africa (Saatchi and Saatchi), and working extensively as a 1st Assistant Director mainly in the UK (Pinewood Studios) and Lebanon (Falling from Earth by Chadi Zeneddine), Wafa’a attended the University College London where she graduated with an M.A. in Film in 2008.

As a director, Wafa’a is currently developing the fiction feature A Girl Made of Dust, adapted from the novel by Nathalie Abi-Ezzi (with producers Julian Friedmann and Basil Khalil), as well as the fiction feature Cello (with producers Paul Ryan, Yan Fisher and Nadine Mourad) that attended development and screenwriting workshops such as the Scene Insiders, Gothenburg Film Festival and won 1st prize for Feature development at the ENGAGE workshop sponsored by MEDIA; Christine Vachon was part of the Jury. She is also a part-time film teacher at the Lebanese American University and has started a series of dance films in Beirut, the first of which was selected at the Cinedans dance film festival.

Wafa’a has written all her films including the feature Cello. Recently, Wafa’a was published in the collective book Of Others (Tamyras), and will launch an illustrated story, The Garden of Laughter in 2012. 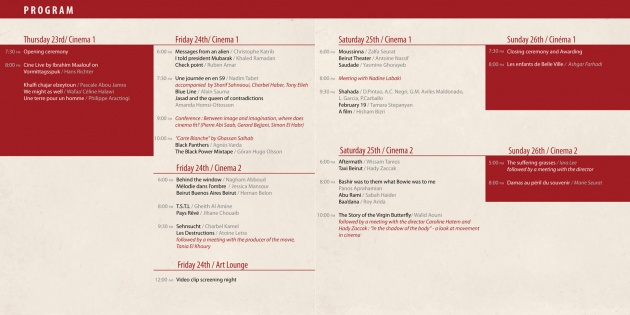