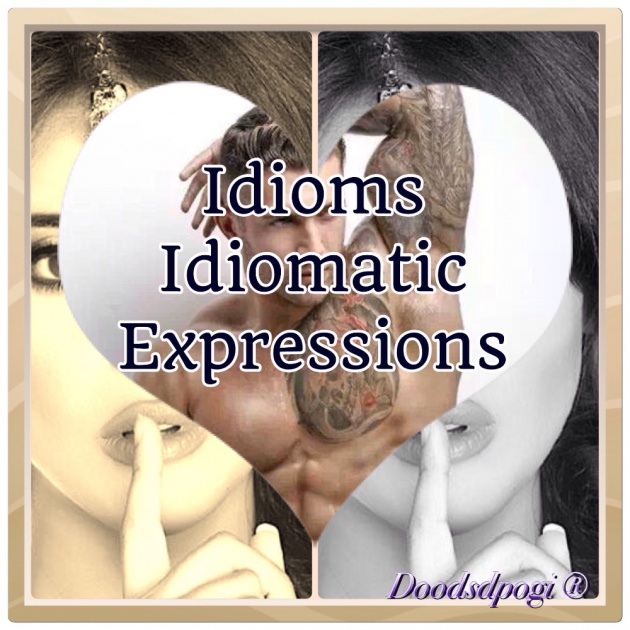 What are Idioms?
Idioms are expressions peculiar to a language and it does not always conform to the formal rules of grammar. Idiom usually has several associated meanings. It has a meaning of its separate elements. You are at home and familiar with idioms if you are using them correctly. Idioms tend to make your speech and writing appear natural.

Here are some examples of the Idiomatic Adjective Phrase which composed of an adjective or participle and an appropriate preposition:
1) Accustomed to = (used to, habituated to)
2) Acquainted to = (to have a knowledge of)
3) Overwhelmed with (filled to over flowing)

Here are some examples of the Common Idiomatic Adjective and Noun Phrase:
1) An absent minded person (person that is not attentive to what is going on around him at the moment)
2) A man's better half (his wife)
3) A black sheep (one who has bad reputation in a company of people)
4) A chicken hearted fellow (a timid, cowardly fellow)
5) A close shave (almost an accident)
6) A cold blooded murder (an unprovoked murder)
7) To have cold feet (to feel frightened)
8) To give one a cold shoulder (to show a person distaste for his company)
9) A confirmed bachelor (a man who has made up his mind never marry)
10) Crocodile tears (hypocritical tears, pretend sorrow)
11) Cross Examination (an examination of a witness in court of justice)
12) A dog-eared book (a book where the corners of the leaves have been turned down to mark particular pages)
13) A fair weather friend (one who deserts you in difficulties)
14) French leave (absence without permission)
15) Half-hearted (having no enthusiasm for the business)
16) A laughing-stock (an object of ridicule, a butt of amusement)
17) A leading question (a question so put to a witness as to suggest to him the answer which he is expected to give)
18) A light sleeper (a person who is easily awakened from sleep)
19) A narrow escape (an escape involving exposure to serious danger)
20) An open-handed man (a man generous to his money)
21) An opened-hearted man (a sincere and frank man)
22) An open mind (a mind not yet made up)
23) An open question (a matter for discussion and not yet decided)
24) An open secret (a secret that has leaked out and become known)
25) A promising youth (a young man whose character and conduct give reasonable ground foe hope that will yet become distinguished)
26) A red letter day (a surprise,a fortunate day)
27) The rising question (a set or generation of young people who have not yet attained to manhood or womanhood)
28) A-side-line (work done apart from one man's work)
29) Small talk (a trivial conversation,gossip)
30) Sour grapes (an expression applied to a desirable thing which is not attainable and is on that account despised)
31) A standing joke (a continuous subject for mirth or ridicule)
32) A wet blanket (an expression applied generally to any person or anything whose presence dampens or check enthusiasm)
33) A white lie (an evasion, a harmless and non-malicious untruth)

Here are some examples of the Idiomatic Noun Phrase:
1) The apple's of one eye (a thing delightful forma person to contemplate)
2) A bed of roses (an easy comfortable situation)
3) A bed of thorns (very uncomfortable situation)
4) A bird's eye view (a general view, not minute or detailed)
5) Birds of a feather (phrase applied to person of similar disposition, persons likely to set in the same way)
6) A burst of applause (a sudden of breaking forth of applause)
7) A round of applause (applause in which the whole circle for meeting joins)
8) The crux of a question (the central point on which the issue turns)
9) A slip of the tongue (a slight mistake in speaking)
10) A snake in the grass (a figurative expression for a secret foe. An enemy concealed from view)
11) AWhat are Idioms? stone's throw (as far as one could throw a stone. In other word a short distance)
12) The ups and downs of life (denotes the changes of life, varying states of prosperity and adversity.