What did I saw on the book?

A small book that have a big impact on me. 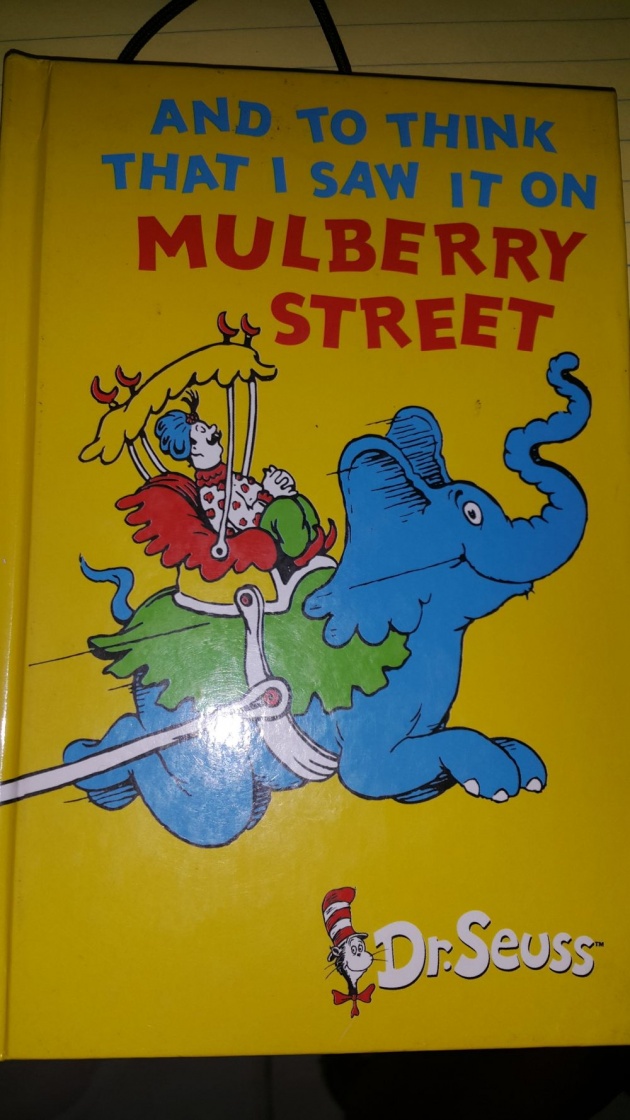 Before I went to visit the Syquia Mansion, I check into the book store and see what I can find. Being a familiar face, one of the staff told me that they still have some books on sale and check what I will find. Then I saw this Dr. Seuss book. I have watched some of the films adapted from the book. I never have one or bought any of his books, thinking that it is meant for kids or never read even before when I am still a kid. With my nephews and nieces on mind, I grab the book and paid Php 39.50, that is around $0.80.

When I reached home from Vigan City, out of curiousity, I read it and learned something. Never thought that this little book has a brought a big lesson on me. Yes, a little book with just 15 pages has made me realize something.

What is the book all about?

The book, "And to think I saw it on Mulberry Street", was written by Theodor Seuss Geisel or Dr. Seuss and published in the year 1937. Quite old book right? The book tells us about a boy named Marco, whose imagination went to fanatasy as he travels along a road, the Mulberry Street.

On that day, Marco will be asked again by his father what he saw as he travels to school, and along the Mulberry street, he saw a horse and a wagon. But Marco don't want to just to be the story. He wanted another story to tell and with his imagination, he created a different one indeed.

The horse had become a zebra, thinking that the zebra might be a shame if it is just pulling a simple cart so he thought of the driver as a charioteer, with the cart turning into a gold and blue chariot.

As he think it more, Marco decided to change the zebra into something again, a reindeer this time, for a reindeer is fast and he is also fleet and will definitely look smart on the Mulberry street.

Lo and behold, this imagination went into something again, Marco made the chariot into a fancy sled, for he thought that the reindeer woild hate pulling a thing that runs in wheels, well, I never have seen any reindeer pulling something with wheels either, even in movies or maybe I have missed one.

From a horse and a wagon, now it a reindeer and a fancy sleigh.

But wait, Marco had imagined something again. The reindeer had become an elephant. A sleigh and an elephant, strange right? And he thought that it doesn't seem right. And I agree with Marco, it really doesn't look something that is right.How can an elephant pull something that is light for the elephant would whip it in the air like a fragile kite.

So, from that sleigh, he thought of big brass band. And he added a trailer that would listen as the great band plays along and not only that, he wanted two more animals that will help the elephant in pulling the band that is weighing tons.

Marco's imagination have turned the Mulberry Strret into Bliss Street because of everything he is thinking. With that, he add police to the picture, to help in manning the traffic and the Mayor is also there raising his hat and the Aldermen waving big banners. You think it is just that? More is being added, an aeroplane appeared and started to dumped confetti while everyone is cheering.

A Chinaman, who eats with a sticks; a big magician who is doing his tricks; a ten-foot beard that needs a comb, these are also being added to his story.

Now, as he gets into the gate, he know he has a story that no one can beat, for it is simply great

As he gets home, he is asked by his father what he saw on his way back home. As much as he would love to tell his story, he just couldn't begin. Marco is asked again if there is nothing to look at or anyone to greet or anything that excites him or made his heart beat. But he just tell his father he saw a horse and a wagon on Mulberry strret.

What I have learned on the story of Marco.

Marco is like of those child that has a big imagination. When I was a child, of course I have imagine a lot and until now, my imagination still runs wild some times. Those "what ifs", I just simply have my imagination wander and wonder, and sometimes it make me feels good that despite how the world now, at least I am thinking of something that is great, something positive.

But the true lesson I have learned is to keep my eyes open. That I as I walk and travel along the street I should try to keep my eyelids open, I know somewhere along the way, something good, something that will make my heart beat is happening.

This is very timely too, with the world we have now, people tend to look more with their phones or gadgets as they stroll along instead of looking at the things around them. Most of us don't want to miss anything what our gadgets has, or what is to be seen with it BUT, aren't we missing more to the happenings around us? Someone might have smiled at you, it can be either a friend or a stranger and you might missed the chance to smile back and make someone else feel loved