A particular characteristic of many vultures is a bald head, devoid of normal feathers. Although, it has been historically believed to help keep the head clean when feeding, research has shown that the bare skin may play an important role in thermoregulation.[1]Vultures have been observed to hunch their bodies and tuck in their heads in the cold, and open their wings and stretch their necks in the heat.

A group of vultures is called a wake, committee, venue, kettle, or volt. The term kettle refers to vultures in flight, while committee,volt, and venue refer to vultures resting in trees. Wake is reserved for a group of vultures that are feeding.[2][3] The word Geier(taken from the German language) does not have a precise meaning in ornithology; it is occasionally used to refer to a vulture in English, as in some poetry. 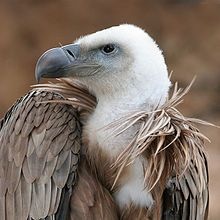