What Shot Composition Lets Us Know

In his book The Five C’s of Cinematography, Joseph V. Mascelli describes the most important aspects (the five c’s) of cinematography as Camera Angels, Continuity, Cutting, Close-Ups, and Compositions.  These concepts help the cinematographer and director tell a unique visual story that will hopefully captivate the viewer.  These tools are used not only to engage the audience, but also help further the story and even sometimes giving clues to how the story will end.  Often cinematographers and directors will use a technique such as shot composition to subtly hint to the viewers what is/will happen in the narrative.

Composition is a term used to refer to how a shot is arranged, everything from what is in the space to the colors used.  Shot composition can be used to draw a viewer’s attention to specific details of the scene.  Sometimes the viewer can see these details without knowing exactly it are they are looking at. Many times cinematographers and directors will uses the composition of the shot to subtlety hint what will happen in the future.

In Quentin Tarrantino’s Reservoir Dogs, Quentin and cinematographer Andrzej Sekuła (with probable help from the set designer) evoke the shot’s composition to give clues to the viewer’s about the true identity of Mr. Orange.  In one particular scene, near the beginning of the film, Mr. White and Mr. Pink are in the odd storage room/kitchen area of the warehouse having a conversation about the jewelry heist that just went awry.  In the background of the scene there are several liquid containers on a counter, on one side is a group containers with pink and white liquid and separated from them on the other side is a group of containers containing orange liquid. This small little detail in the shots compositions lets the audience know that Mr. Orange, who is currently bleeding out in the next room, is not the same as Mr. White and Mr. Pink.

Vince Gilligan’s hit TV Show Breaking Bad uses shot composition to allude to future events constantly. One such example of this is in the episode  “End Times” when Walter White spins his gun a few times.  The first few times he spins it the gun points at him, but the last time he spins it the gun points to a plant.  Using both camera movements along with a rack focus the cinematographer brings our attention to the plant letting us know that it is important.  Eventually the audience finds out, at the end of the next episode, that Walter uses this plant to poison a child in order to manipulate his partner to do what he wants. 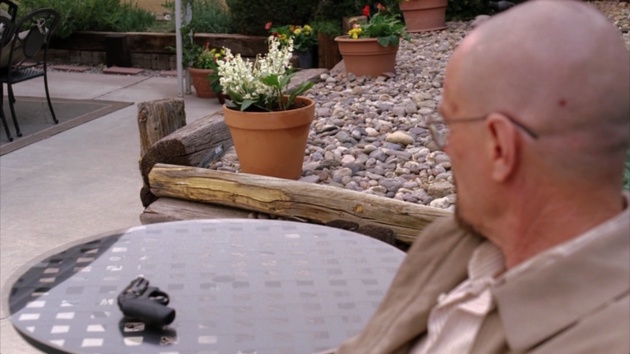 Throughout The Departed, Martin Scorsese and cinematographer Michael Ballhaus seemingly mark their characters, letting the audience know which ones will eventually die.Characters in the filmare marked with an “X” letting the audience know that they will eventually bite the big one.  These “X” marks show up behind every doomed character at some point during the film.  The only person in the film who is not marked is Sergeant Dignam, the only person to survive.

By using unique shot compositions these artists are able to subtly let the audience know what is going to happen without the audience actually realizing it.  These small clues, despite being pretty cool, help add a unique level of story telling that only a medium like film and television could truly embrace.  These storytellers use composition, along with camera angels, continuity, cutting, and close-ups, to effectively tell a visual story that keeps the viewer engaged.

Hi everyone! My name is Zac Fallah is a writer, director, producer, and editor of film. Currently a student at the School of Visual Arts in New York City. I also run Father Nelson Pictures, a small production company out of Long Island.