What To See in Dubai Mall

It looks like I am missing my life in the city of Dubai. I have been dreaming about walking around the city and exploring the things which this place have and of which I have not experienced or even see in the Philippines. So I thought of sharing the stuffs which I have enjoyed while I was still working in the said city.

I believe it would be best to share the place which I had first visited on the very first day that I arrived in the Middle East. And that would be the Dubai Mall. However, I guess I should share to you the feeling of traveling alone and how the weather was in the said country.

I arrived in Dubai at four in the morning of May 8, 2012. Since it was May, it was also freaking hot in the desert. I have not felt it while I was inside the airport terminal but by the time I stepped outside the air conditioned place, even if it was still four in the morning, I could definitely feel the hot weather.

Good thing that my brother arrived on time, I was about to sweat though but thankfully we went home to Satwa, a street which was like the little Manila in Dubai because everywhere you go, you'll see Filipinos like literally. I had to stay at home the entire day since my brother has to go to work but in the evening time, my brother told me to get ready as we will be visiting the famous Dubai Mall.

Of course I was definitely excited to see it in person so I went on and got ready. We have to take a cab so we can also witness the dancing fountain. Upon reaching the entrance area, I was astonished with the lights and how magnificent the view that I can see from the entrance area. Here are the stuffs that we went in and of which I definitely enjoy on the first visit and even during my entire stay in the city. I would usually go to Dubai Mall for certain bank stuffs and friends get together. 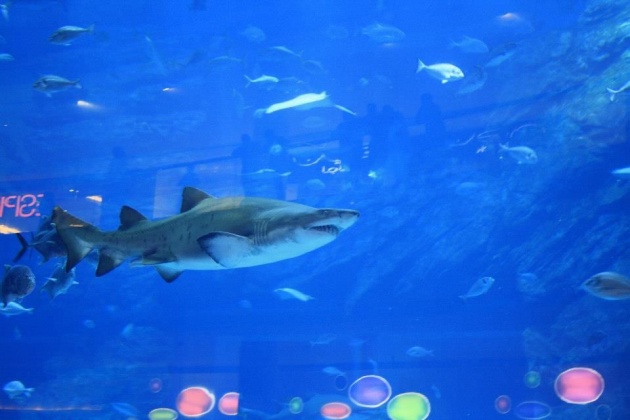 This is somehow equivalent to the Manila Ocean Park but it has a public and a private area. Public is where the visitors can see the huge aquarium from the outside for free and of course anyone can take photos. Every single time that I would go to Dubai Mall, there are tourists and locals taking photographs in that area. I have been to Manila Ocean Park and if I will compare them in terms of presentation, this is way better. Even if there's a bigger paid aquarium, one can already get enough with just the free one. You'll g wet to see huge species of fishes, corals are lovely and colorful and there are also sharks and stingrays.

If you have the extra budget, their private aquarium would cost: 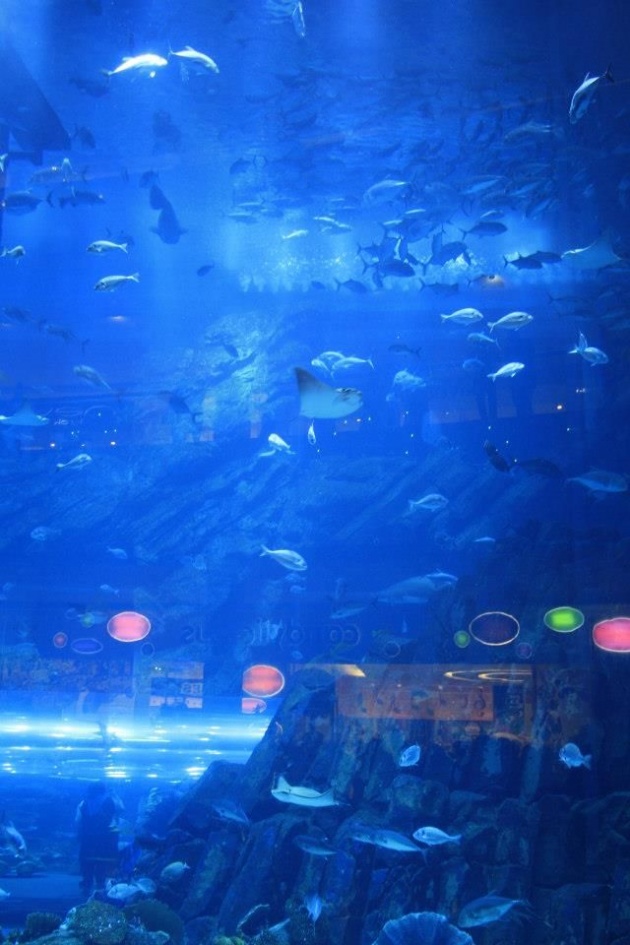 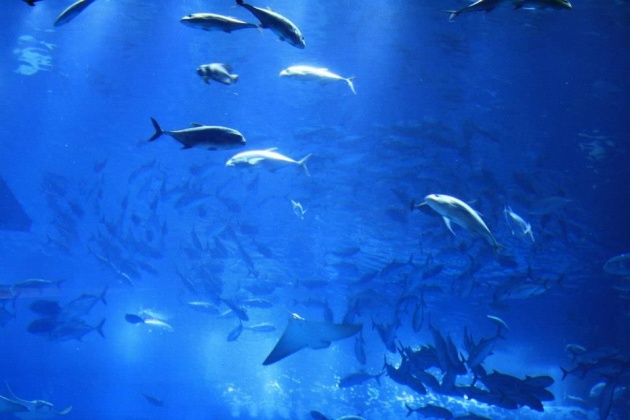 The one above is a favorite photo because it shows how huge the aquarium because the number of fishes inside. These are huge fishes and the stingrays together with the sharks join together. It's really amazing. 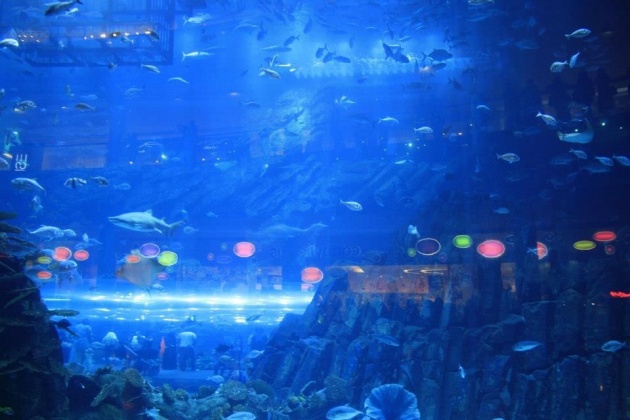 IF you notice, there are reflections of some visitors inside and that's how huge this aquarium is. The corals are bigger than the people around. There are live corals of course plus the stones and rock formations are definitely astonishing.

Underwater tunnel under a huge shark & ray-filled tank, plus a creepy crawly zone with snakes. It is definitely worth it. And another freebie, while in the aquarium area, one can also get a beautiful sight of the starry ceiling. Check the photo below: 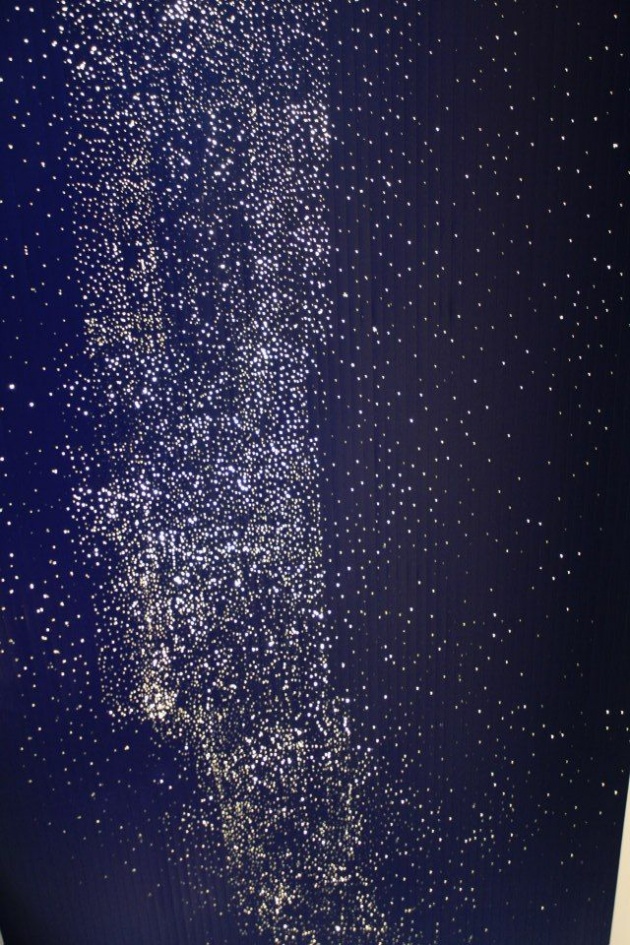 Here's a video of how the starry ceiling looks. They are not stationary but are twinkling every now and then just like real starry night. Amazing right? I remember Emirates Airlines, the plane I had taken from Manila to Dubai also has this kind of ceiling design. 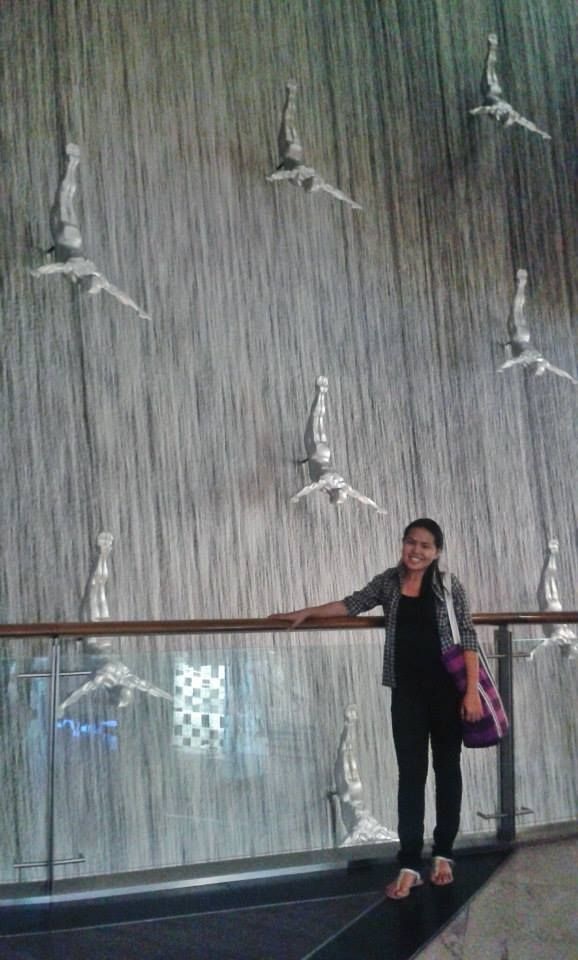 This is one of my favorite spots because not everyone would be hoarding in this area and since it is a bit far from the busy parts of the mall, it is quiet in here. There are coffee shops nearby and some music stalls so music can be heard everywhere. 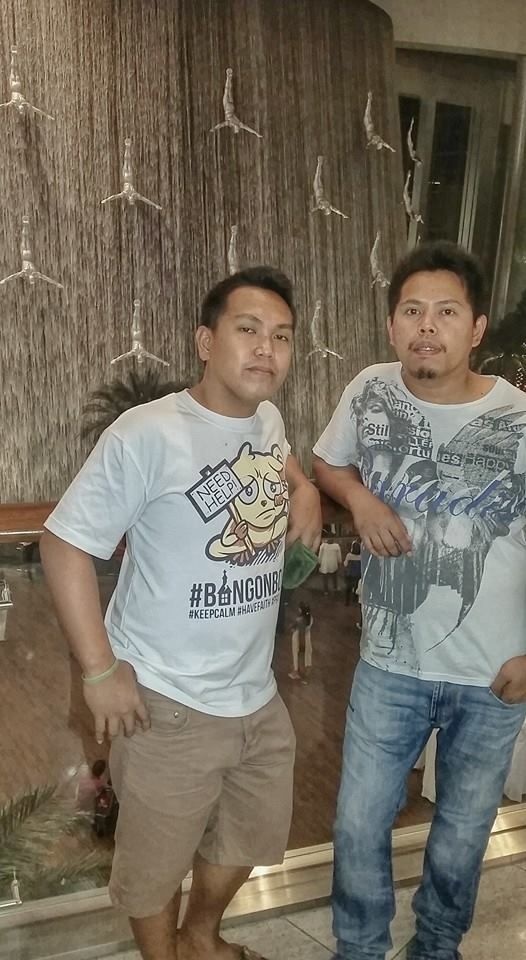 Here are my brothers at the free fall area when our youngest, the one with the Bangon Bohol tshirt first arrived to Dubai.

But the best thing that you can hear here is the sound of dropping, splashing and flowing water. The mannequins which have been placed in an upside down position which looked like people diving towards the bottom of the water falls makes a great illusion. Oftentimes, I am imagining them as real humans. 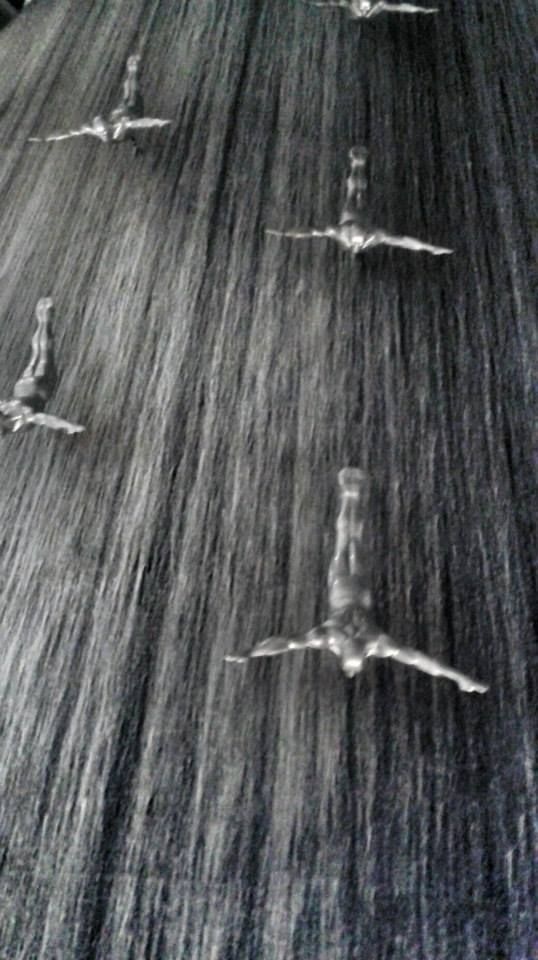 Unlike the aquarium, I rarely come here, usually when a friend or a relative is visiting the mall for the first time because it requires a lot of walking. But it is definitely worth the walk. The

The kid inside me made a perfect cartwheel when I first saw those huge variety of candies hanged on the entrance of this shop. It was really funny because I was still very much hooked with the game Candy Crush when I first saw it so I definitely felt like I was inside the virtual game. 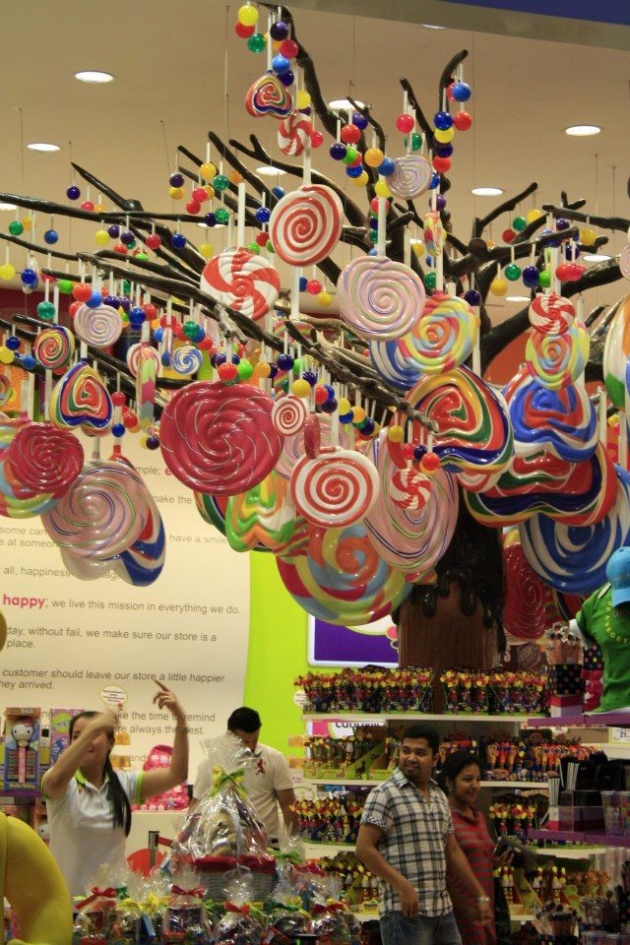 It is a store for different kinds of sweets like literally any candy, chocolate, gummy bears and a lot more. There I became a girl version of Phillipines' Juan Tamad for waiting that those huge candies hanged will fall into my mouth. The photo is courtesy of my friend buddy who had taken the photo a lot of times and after a lot of attempts, we had finally taken this without any photo bombers and Arabs passing around infront of us.

Well actually some of them were laughing seeing me opening my mouth: 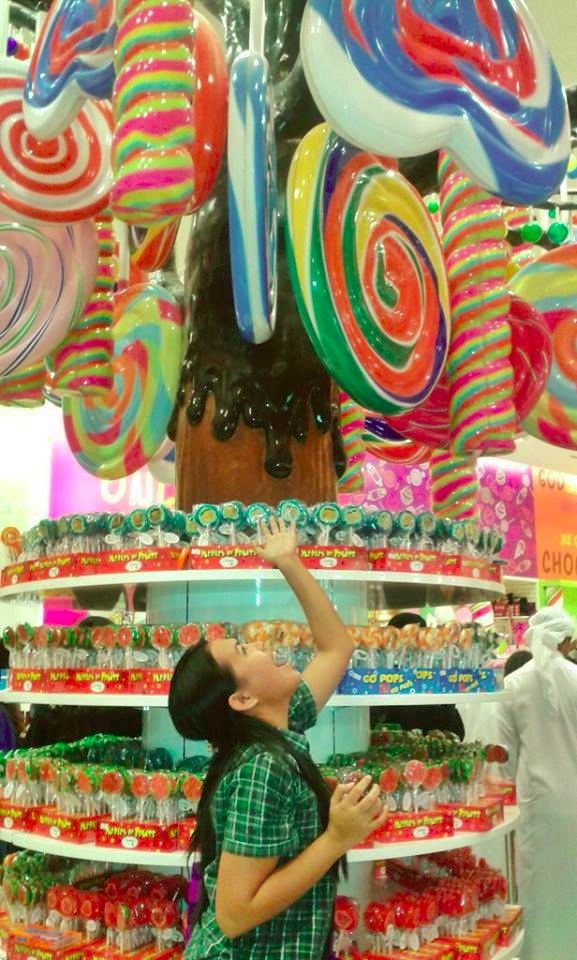 There had been no snow in the United Arab Emirates but one can still enjoy a day of skating at Dubai Mall's Ice Rink. 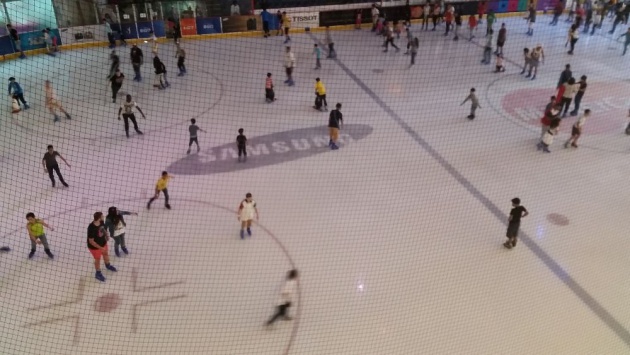 Anyone can enjoy a whole day of skating for AED 100 that is equivalent to more or less 1200 philippine peso. This can be done from ten in the morning until 12 midnight.

I am not a fan of skating and I have always thought that I won't be able to skate properly while in there but I enjoy watching from the next floor area so I have an aerial view of what's going on in there. It is definitely fun. I have seen a lot of dropping and bumping on the covers and the rails but there have been experts also who skates fast.

Of course the famous dancing fountain cannot be missed when you are visiting the Dubai Mall. Well most tourists would visit this mall due to the fact that it is just located around the tallest building of the whole wide world, Burj Khalifa. And there's a daily free show of it's Dancing fountains. 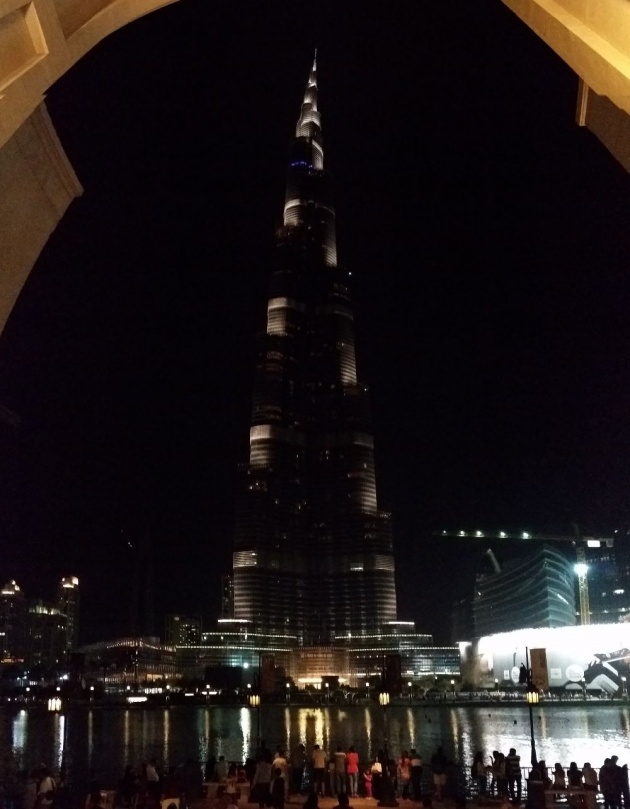 This is an area which is facing the huge Burj Khalifa, there's a bridge connecting the Dubai Mall to the rest of the malls around this area where locals, tourists and visitors would be situating while waiting for the daily performance. The Dancing fountain plays from 7:30pm to 11:00pm daily including Ramadan days.

Here are some facts the Dubai Fountain website had listed: 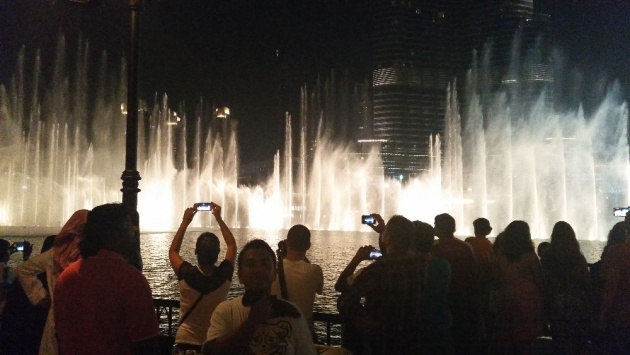 Here's my brother with the dancing fountain bursting its waters to a height. It has been fun watching this specially when you are situated very near to the waters, you'll definitely get a bit wet.

I cannot anymore count as to the number of times that I had watched it and yet I am still amazed with technology. With how they had set the fountain to somehow follow the rhythm of the music. 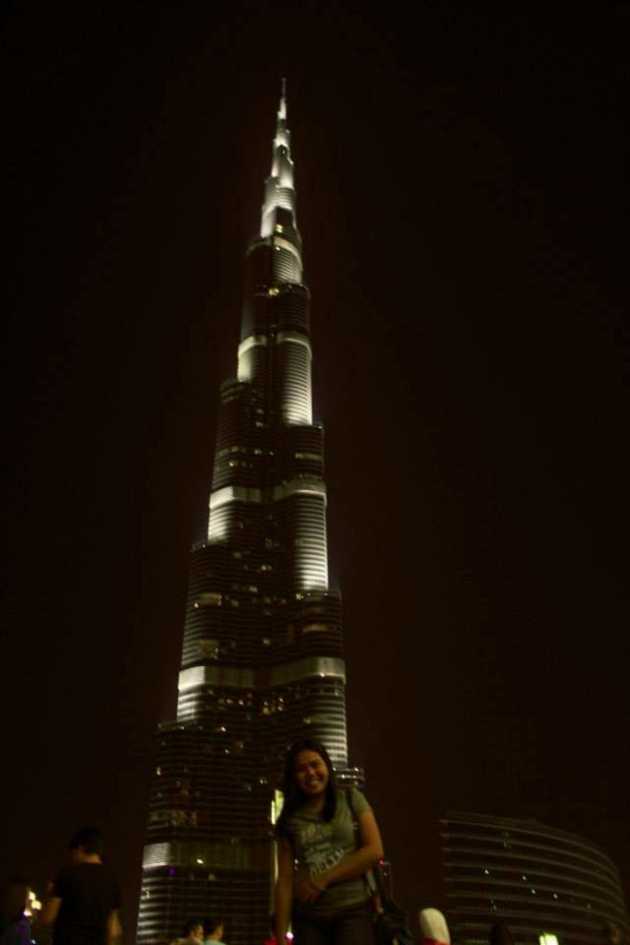 This was when I first came to Dubai. After a few attempts, my big brother finally had taken a clearer photo of me with the Burj Khalifa at the background. The other photos were really blurry, this is the only one which is much better. 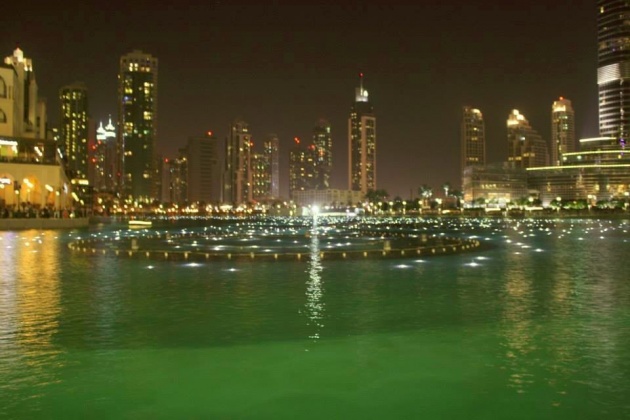 This is the view on the lake when the music starts, the lights are all on that it looks like day time. You'll see the lights from underwater and the water will start coming up with

If you are still not sure what I am talking about, watch these videos below, the first one I took the video myself but it is better to watch it from other users too specially the HD videos:


Aside from that, anyone can also have a front view of the said dancing fountain event by the traditional Abra boat. The ticket counter and the abra bay are located at the Waterfront Promenade of The Dubai Mall and at At the Top, Burj Khalifa and can be conveniently accessed by visitors.

This is only the first part of my Dubai Mall favorites. I'll be posting another one which includes the reasons why I can stay in Dubai Mall whole day.

Check out my other posts about Dubai: