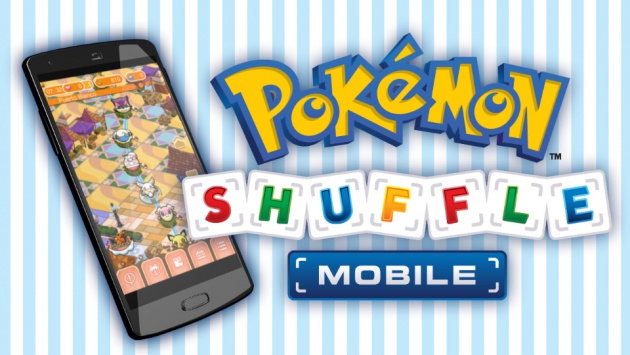 Hello guys~ LookUp again here :3 This time I will continue to discuss about my previous blog titled "What You Need to Know about Pokémon Shuffle Mobile: A must-have app game for Pokémon lovers - Part 1". Although I only got 4 stars in that blog, but I am quite satisfied with it. In this blog I will discuss more about "Pokémon Shuffle Mobile" and share my experience about this game, because I have been playing this game since last month and still enjoying it till now. Happy reading~!!! 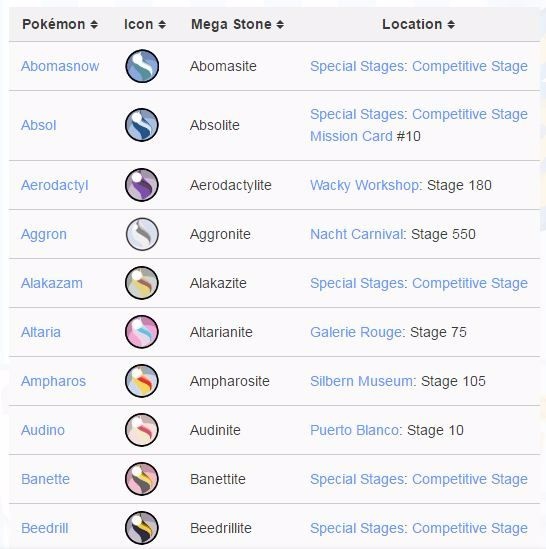 Mega Stone can be obtained by defeating the mega Pokémon in a certain stage. Or you can also get it from completing "Mission Card" or can also be obtained from following a certain event. Once you get the mega stone, then your Pokémon Lead will be able to evolve. You just have to fill the "Mega Gauge" which located on middle corner of screen by matching Lead Pokémon as many as possible while playing the stage or level. Each Mega Pokémon has different skills which are different from Support Pokémon's skill. You can read more about the list of Mega Stones here: http://pkmnshuffle.wikia.com/wiki/Mega_Stone

In the "Pokémon Shuffle Mobile" there is also a thing called "Mission Card". You will get various rewards after you can complete the mission card. You could get reward like coin, jewel, items, and mega stone. For now, there are about 16 different Mission Cards. Each Mission Card has its own difficulty level. To use the Mission Card, you must first select the Mission Card you want to complete in the Mission Card menu and tab the "Choose Card" button. There are many types of missions you can complete, such as make a combo of certain number, trigger the mega effects in certain stage, get a certain score, etc. 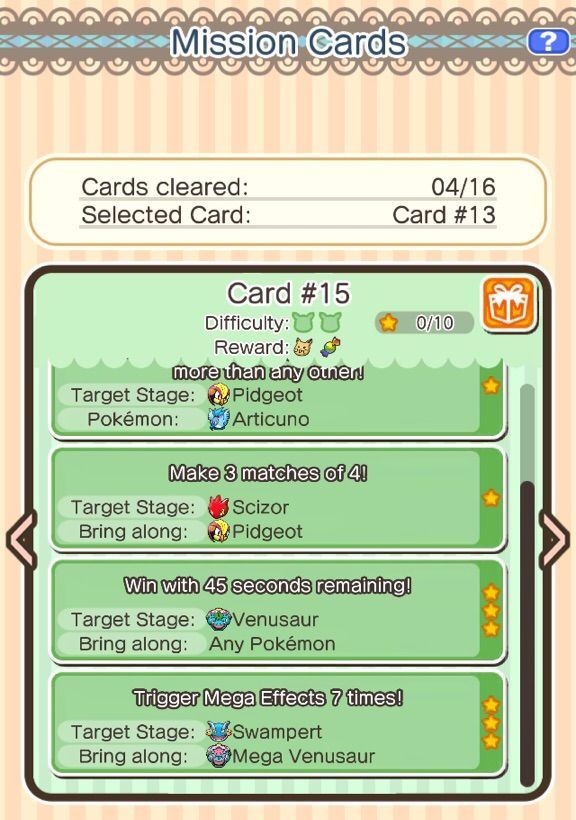 There are three stages in "Pokémon Shuffle Mobile", main stage, expert stage, and special stage. The main stage is the place where you finish each level in "Pokémon Shuffle Mobile" in sequence by defeating wild Pokémon. Once you defeat wild Pokémon then you will move to the next level. Every time you finish beating the wild Pokémon there will be letters like "A, B, C, S" next to Pokémon that indicate a rank based on how quickly you beat the wild Pokémon or how fast you beat them (I'm still not sure :D), where the letters "S" is the highest ranking. And at any certain level you will fight against mega Pokémon and will get a mega stone if you can defeat it. 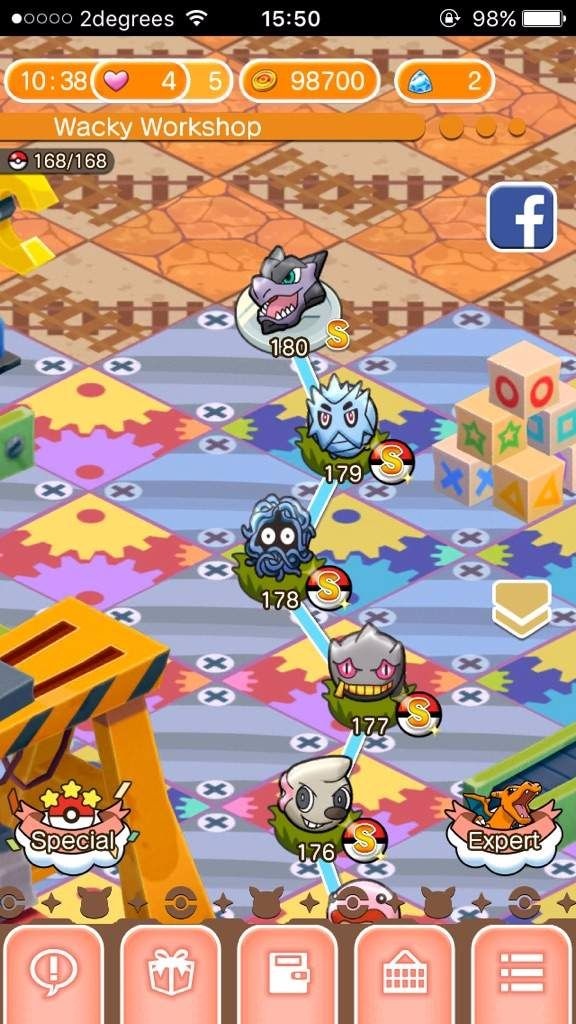 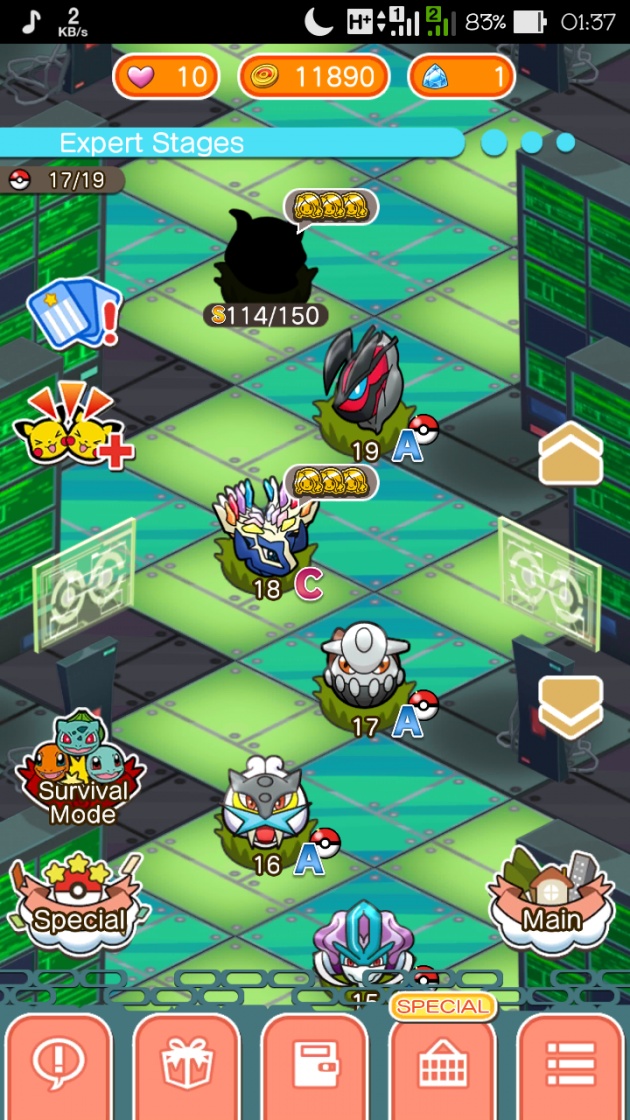 Last, about the special stage. This stage contains a variety of Pokémon with varying degrees of difficulty. Pokémon in this stage will only appear at certain times and have a time limit. On certain days, there are some Pokémon that will come up and give you some benefits if you fight them, like Meowth who will give you a lot of free coin, or Victini will give you EXP points doubled, and Eevee who gives you Skill Booster. However, you can only fight them once as long as they appear or you can pay with a jewel if you want to fight them again. In addition, in this special stage there are Pokémon that are not found in the main stage that appears on certain days such as Viper, Torkoal, Mega Houndoom, etc. 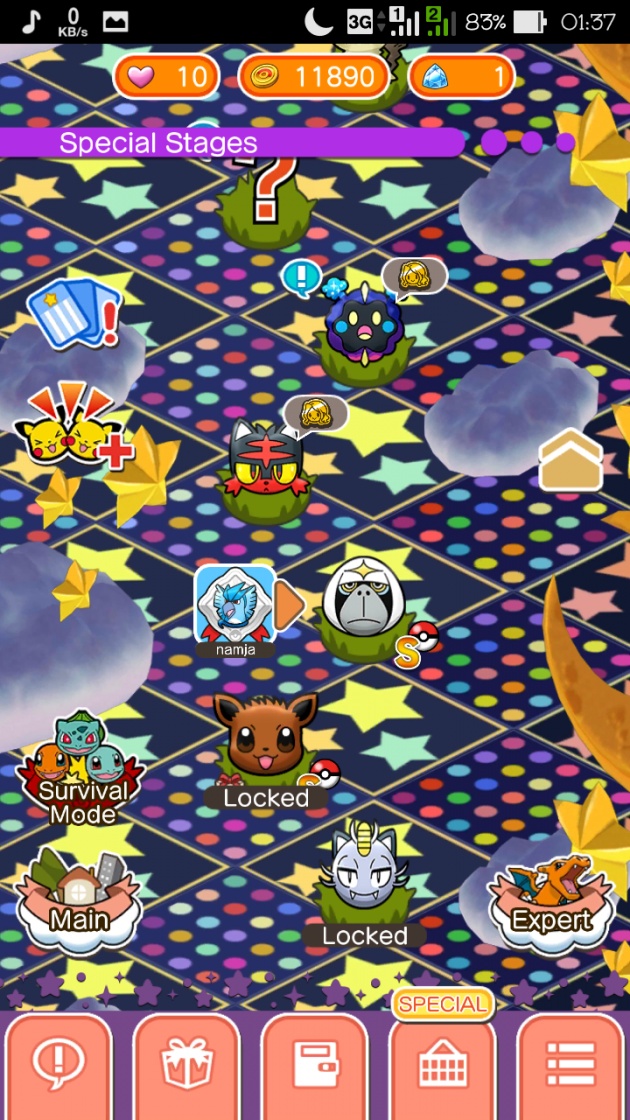 There are also legendary Pokémon that appear on certain days, which of course has a high difficulty.. Sometimes there is a competition held in a special stage that can be followed by all players of "Pokémon Shuffle Mobile" around the world. You will get different items based on the score you get. Usually this competition will last for several days and you can try it many times to get a higher score.

Except the three stages above, there is an additional stage called "Survival Mode". To play this stage you need 3 Hearts, and with four Pokémon you have chosen, you will fight wild Pokémon continuously after defeating Pokémon before. The number of moves you get each battle is fixed, but it will keep increasing as you keep winning. You will have a chance to get rewards if you successfully complete each stage. And the thing to note is that you can not replace the Pokémon you bring until the game is end, so you have to be careful in choosing which Pokémon you'll bring. 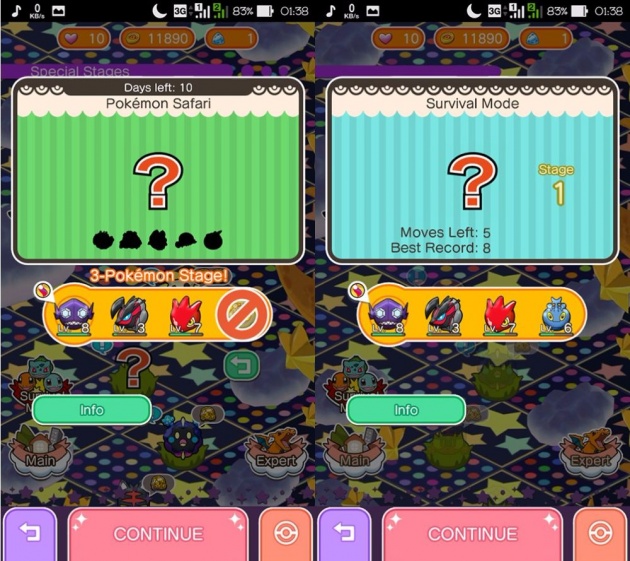 My Experience with Pokémon Shuffle Mobile

Yeah, this blog is near to end, and I will share my little experience of playing "Pokémon Shuffle Mobile" to closing my blog. As I said before, I started playing "Pokémon Shuffle Mobile" since last month. I am looking for a game about Pokémon in play store besides Pokémon GO, then I am interested in this game. After I played several times, I became addicted, but due to "Heart" limitation so I could not play continuously and had to wait. But it does not matter, I'm having fun with this game.

The game is simple, but its content is interesting by using Pokémon as its appeal. So players will have satisfaction with capturing and collecting Pokémon as much as possible. Some level or stage is difficult, but you can solve it in various ways or if you get stuck, you can find many tips to solve it throught internet which shared by other players. 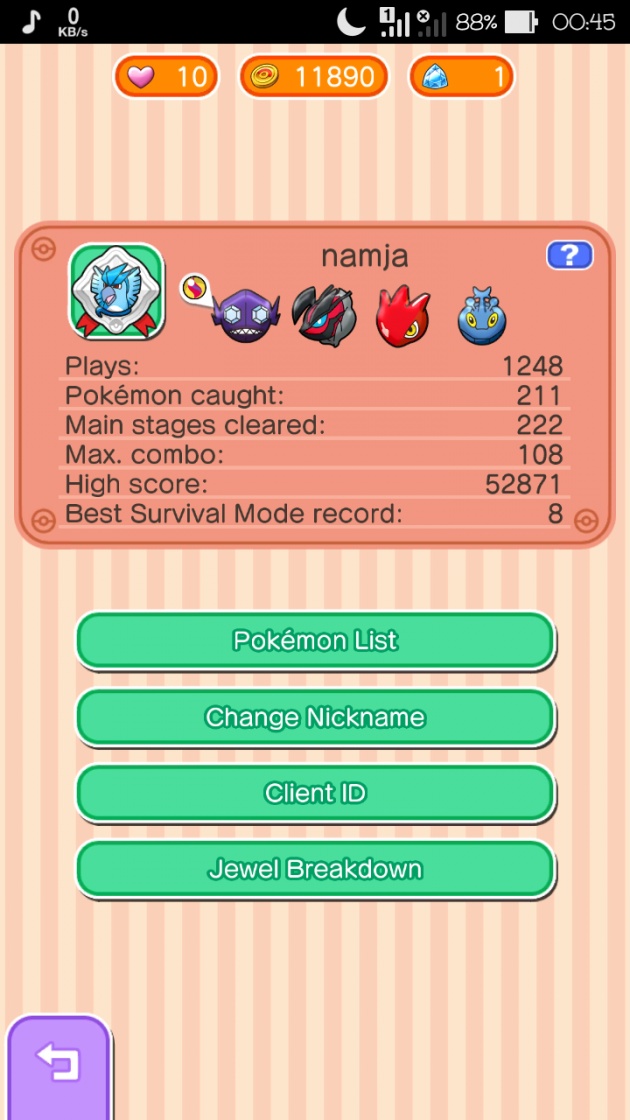 The other thing I love about "Pokémon Shuffle Mobile" is, you do not have to spend money to buy jewel and use it to buy various items. You can still play as a free user but still get awesome items by following special events which held at a certain time or sometimes they give a lot of gifts for players at certain times. As of now, I am at 223 level with 211 Pokémon and silver badge. I have not been bored with this game and determined to complete all level of the main stage. Do not forget to add me as your friend with my friend code "C4AA-HAZP" so we can have fun together.

That's it, my last blog about "Pokémon Shuffle Mobile". I hope you enjoy it, though it is a bit boring I guess :D