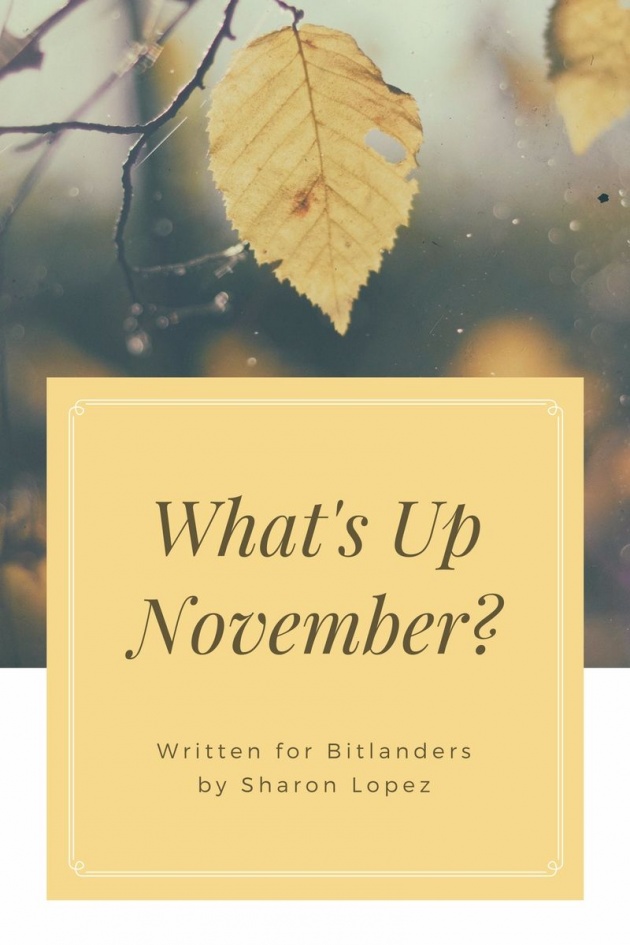 November is the penultimate month of the year. For the majority of Filipinos and other Christian countries, this month is crucial. November is the month-long preparation for the coming Christmas Season. It is a common knowledge that the Philippines has the longest Christmas Celebration which would usually start as soon as the BER months had started. People are busy planning for the Christmas parties and other family events for the coming holidays. Most Filipinos would like to take advantage of the longer holidays before the year ends.

The most significant event in November happens during the beginning of the month. November 1 and 2 is when Christian Community set aside time to commemorate the departed loved ones during the All Souls and All Saints Day following the Halloween celebration on the eve of October 31. The Philippines, which is one of the two predominantly Roman Catholic nations in Asia, celebrates All Saints and All Souls Day by visiting the cemetery where their loved ones who already gone to another life lies.  Families of the departed would bring flowers, candles, and some food which they can eat together during the occasion.

A gradual change in the temperature can be felt during this month because of the effect of the start of winter season in other parts of the world. In some countries, like Paris, France, November is considered as the coldest month. It is also noticeable that night time seems to come earlier. People would notice that at around 5:30 in the afternoon, it is already starting to get dark. Although these already started around September during the start of Autumn in other countries, it was a slow process and becomes noticeable during the middle part of October. Other places adopt the Daylight Saving Time in order to maximize the use of natural daylight.

November gets its name from the Latin word "Novem" which means nine because it was the ninth month of the Roman Calendar. The Roman Calendar has only ten months with 304 days in a year.  The names of the months were Martius, Aprilis, Maius, Junius, Quintilis, Sextili, September, October, November, and December. However, since we are already using the Gregorian calendar, November becomes the 11th month of the year.

Some Facts About November

Citrine and Topaz are the two equally precious stones that are associated with November birthdays.

November birthdays are associated with two gems; Citrine and Topaz. The warm color of Citrine is said to be a gift from the sun and it's believed to be a healing gemstone. Topaz is most desired in its rich orange Imperial Topaz color but it is found in a variety of rich colors like blue, pink and yellow.

Next to Rose, Chrysanthemum is one of the most popular flowers in the world. The name originated from Greek word, 'Chrys' which means golden and 'Anthemon'  meaning flower.  Source: TheFlowerExpert.com

Scorpio-born are passionate and assertive people. They are determined and decisive, and will research until they find out the truth. Scorpio is a great leader, always aware of the situation and also features prominently in resourcefulness.

Ninth sign of the Zodiac and represented by a centaur.

Sagittarians are truth-seekers, and the best way for them to do this is to hit the road, talk to others and get some answers. Knowledge is key to these folks since it fuels their broad-minded approach to life. The Sagittarian-born are keenly interested in philosophy and religion, and they find that these disciplines aid their internal quest.

Image Credits: All Saints via Wikipedia

This event is being celebrated during the first two days of the month, the All Saints and All Souls Day where families will visit the dead.

This year's celebration of Bonifacio Day, November 30 falls on a Thursday. This is a national public holiday in the country in celebration of the birth of one of the greatest heroes, Andres Bonifacio.

ASEAN summit is a semi-annual meeting held by the member of the South East Asian nations in order to discuss things which are related to the economic and cultural growth of the member country.  This year, the Philippines is the chairman of the summit. The days covering the activity was declared a holiday in selected areas.

Celebrations During the Month of November

This is in accordance with Proclamation No. 1109 dated October 22, 1997, Signed by the then President Fidel V. Ramos  RE: "Declaring the Month of November of Every Year as Clean Air Month Through National Vehicle Inspection and Maintenance Consciousness"

Activities on environment awareness will be spearheaded by the Department of Environment and Natural Resources especially on the Solid-waste Management. Activities such as seminars and school-based activities related to saving the environment will be conducted during this month.

November 19-25, 2017 is the National Climate Change Consciousness Week which shall cover activities that would help save the environment like mangrove tree planting.

Pursuant to Republic Act 10661 otherwise known as the "National Children's Month Act," the country shall commemorate the '25th National Children's Month' this November 2017. Different activities involving the children and highlighting their importance in the society should be given emphasis during the celebration. (Source: DILG MC#2017-143)

Other Events in November

November is one of the most awaited time of the year especially for employees in the government service and some private firms. This is when the Year-end Bonus is being released. Along with this is the start of the massive promotional campaigns of business establishments. Since business owners knew that government employees will be receiving their bonuses in the middle of the month, they are offering great discounts on products and services in order to get the sale.  Some malls are having 'Midnight Sale' to give shoppers extended time for their shopping spree.

Black Friday is the day after Thanksgiving. Thanksgiving Day is a national holiday celebrated in Canada, the United States, some of the Caribbean islands, and Liberia. It began as a day of giving thanks for the blessing of the harvest and of the preceding year. This year's Thanksgiving day shall be on November 23 which is Thursday.  (Source: Wikipedia)

During Black Friday, most stores would give special discounts on early bird shoppers, thus people would line up at the entrance of the malls before its opening to avail of the great discounts. During the last few years, Black Friday Sale was already implemented by the different online shops. So, even people from other countries, like us who came from the Philippines, can avail of the Black Friday Sale discounts.

How about Bitlanders? Does the site also have a Black Friday Sale this year? Well, I hope they have. I am excited! How about you my friends?

Here is a video that could give us the latest information about Black Friday Deals.

On the final thought

Although November might be that certain period of the year when the weather seems to be at its gloomiest, still this is not enough to hold the people inside their homes. With so many activities awaiting for each and every one of us, we will always be eager to go out and check what activities we could do. All we need is our coats and umbrellas at hand.

For me, November is the month of preparation for the greatest event, the Christmas Season. The Bonus Month, The month of massive discounts, therefore the Shopping Month. A month full of fun and excitement

Image credits: Made by me. Recently, the 24th November has passed, on which the World had celebrated…

image source: www.pixabay.com Hello, guys! I was thinking what would be the topic for my next blog…