What's Up with Upshaw? Episode 5

It's almost the weekend and I'm still high on last weekend.  I was invited by the Hammond INnovation Center to participate in an Artist's Alley with other local cartoonists as part of Hammond's 2nd Annual Art Tour.  I really wanted to be with other cartoon creatives; iron sharpens iron, and I felt truly sharpened.

At my table I had my comics displayed, I showed my animations on my laptop and I did caricatures of the guests for $5 apiece.  At the table to my left were Fawn and Charity, two young women who did original manga (Japanese comics).   They also did bookmarks featuring famous anime characters like the cast of "One Piece".  I learned that  Fawn also taught manga drawing at the South Shore Arts Center.  Years ago, I tried to apply as a cartooning teacher but they wanted a certified art teacher for the job.  I guess they relaxed their job requirements since then.

Two things I noticed right off the bat:  At age 53, I was the oldest 'tooner in the Alley.  I was also the only one doing animation and caricatures, not comic books.  Still, we had some things in common--like customers who try to get us to do cartoon work for them for free or very cheap.  They do not respect us!  To their credit, none of the guests in Artist's Alley took advantage of us.  They paid the full prices for our hard work.

There was an art contest for the kids, and the prizes were art supplies donated by the participating artists.  I couldn't contribute a prize but I did get to do a caricature of the first prize winner.  That was good.

The best part about Artist's Alley was connecting with my crowd--the artists and the fans.  This works better for me  than going up to a strange audience and trying to win them--that kind of selling never works for me.  It's the reason I no longer do caricatures at my friend Renee's speed dating events--they're not cartoon fans and I can't make them be so.  Better to find your own tribe.

The Hammond, Indiana art scene seems to be my tribe for now, with caricatures at Paul Henry Gallery and the Art Tour.  Maybe it's time to branch out--do a festival in downtown Hammond.  Attend others' exhibits at Substation No. 9, another gallery downtown.  Maybe it's also time to look up the East Chicago Arts Initiative and re-introduce myself.  And try again to hook up with ECTV government channel.  And do commercial artwork for local EC businesses.  Oooh, I'm a ball of creative fire!

Here's me and my fellow Artist's Alley participants.  We look good, don't we? 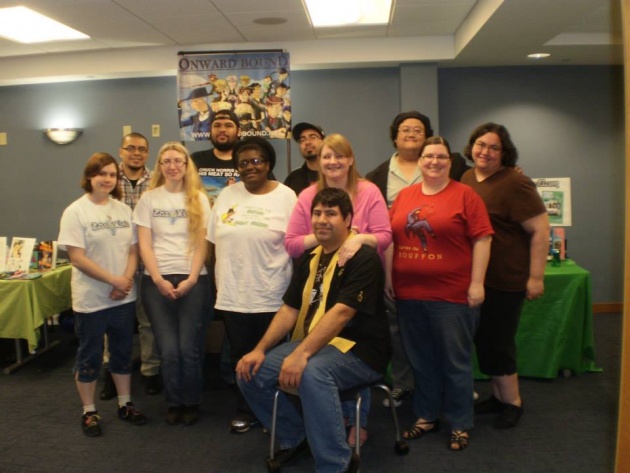