What's Up with Upshaw? Now What?

Here I was today, all set to do a bunch of comics for the upcoming "Afghanistoons" with Edward Zeller.  Even the local PBS station wants to interview me.  Then I get on Twitter and see a tweet by Marjorie M. Liu, fantasy novelist and Marvel Comics writer, about sexual harassment of women in the comics industry, particularly about a woman expressing an opinion about a comic cover with an overly-developed teen girl character being too sexualized.  The woman received rape threats from angry male fans.

What really got me is Ms. Liu comparing this to brutal attacks on women in Afghanistan--rapes, disfigurement, unproven accusations of adultery, the burning down of schools for girls--as coming from the same kind of hatred.  And now I was doing a cartoon with wise sayings from a country that does all that to women.

I didn't know what to do.  Should I pull out of "Afganistoons" out of solidarity for women everywhere?  If I stay, will I be accused of supporting a regime that hates women and wants to keep them "in their place"?

Then I decided:  Quitting is too easy.  And whom am I helping if I do?  Quitting would only be an empty gesture, a big show that means nothing and won't change anything. It also means that cruel male chauvinists win because a woman is shutting up, just like they want her to.  And I know there are respectful, supportive men in Afghanistan as well as in the comics world, so quitting means not acknowledging them.

So I'm doing "Afghanistoons".  And since Edward is letting me use American characters to illustrate the proverbs, expect just as many women and girls in the cartoons as men and boys.  It's D.K. Upshaw's way of saying, "I'm here, I'm female, enjoy!" 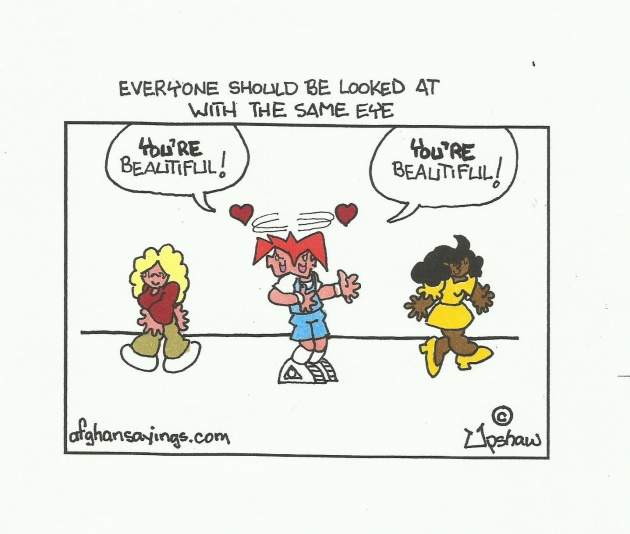