When a slump hits a vast iron ore mine in Australia

When a slump hits a vast iron ore mine in Australia

By Ali MooreCloudbreak mine, Western Australia

Australia's iron ore industry has hit a slump after decades of boom fuelled by rampant demand from China. This is threatening the livelihoods of thousands of miners and entire communities dependent on these vast opencast mines.

At Perth Airport, just after 05:00 local time, the boarding gate is a sea of fluorescent yellow and blue. This is a regular shuttle service to Fortescue Metals' Cloudbreak mine - the passengers are fly-in-fly-out workers and they come dressed for the job.

In just under two hours they'll land at one of the giant iron ore mines in the Pilbara, where the red dirt hides untold riches.

But times have changed. The price of ore has plummeted, down around 70% from its 2013 peak.

Every mine worker boarding Flight 1970 knows what that means: cost cuts. They've seen hundreds of millions of dollars worth of cuts across the industry already and more are likely to come.

China's economic slowdown means the country doesn't need as much iron ore. It's the key ingredient for steel, and if you're not building as many apartments and bridges and roads as before, you don't need as much of it.

But the big miners are still increasing production to build market share. It's an easy equation: demand down and supply up, price plummets.

In the past few weeks the impact has been writ large on share market screens. Rio Tinto, BHP Billiton and Fortescue Metals, Australia's top three iron ore producers, have all seen their share price hammered and their profits crushed.

The dozens of workers thumping down the aircraft stairs in their heavy work boots at Cloudbreak mine's airport are not thinking about price this morning. They're focussed on getting to work.

Most of them will do a 12 hour shift every day for the next two weeks before they fly out for a week-long break. The shift is called "two and one". It used to be "eight and six", eight days on and six days off.

The change means the company needs fewer people, just one of the measures helping Fortescue Metals keep its head above water.

"It's fair to say we have to think differently, we have to behave differently," she says, as she overlooks the mine's giant ore piles, waiting to be loaded onto trains for the nearest port to be shipped to China.

Karratha - the days of thriving growth are over

'A knife through the heart'

You don't have to go too far to see that pain.

Five-and-a-half hours' drive from Cloudbreak is Karratha, a small city on the coast, with just a handful of multi-storey buildings and sprawling residential streets.

This is a town built on a mining boom. It used to be one of the fastest growing places in the country. But after years of good times, many are finding it difficult to adjust, especially those who have lost their jobs.

"Everyone was so happy looking forward to making lots of money, paying off mortgages", says Peter Lynch as he practices his bowls on a weekday afternoon at the Karratha Bowling Club.

Mr Lynch worked in the iron ore industry on and off for some 27 years before being made redundant. He's just a few years off retirement and has been unable to find another job. He feels the pain of the recent changes deeply.

"All of a sudden someone decided to turn the lights out - wow it was like a knife through the heart," he says.

"We've seen a lot of marriage breakups, we've seen mental health issues, uncertainty. Where's the next job going to come from? What's the future for the next generation of Australian people? I'm in exactly that same boat."

"What's the future for the next generation of Australian people?" asks former miner Peter Lynch

Karratha is also feeling the impact of the end of the construction phase of Australia's mining boom: as jobs go, people leave town, devastating property values.

Real estate agent Ryan Crawford takes me round a local housing estate, past neat rows of houses and front lawns battling the red dirt of the Pilbara to stay green. He shows me through a relatively new, two-storey brick home, with four bedrooms and two bathrooms.

He calls it a "standard executive residence", but the owners are not enjoying the fruits of their investment.

"An investor around two years ago would have paid around $1.2m [Australian] for something like this and right now today would sell it in the marketplace for around $A750,000," Mr Crawford tells me, adding that he thinks prices are down around 40 to 50% across the market.

Property prices are down around 40 to 50% across the market

It's not surprising that the impact of that price plunge is being felt in the community. Nanette Williams runs the Pilbara Community Legal Service, which provides free advice to locals whose financial problems have become overwhelming.

She says she's seen a number of people lose their homes, some just handing over the keys to the bank and walking away. 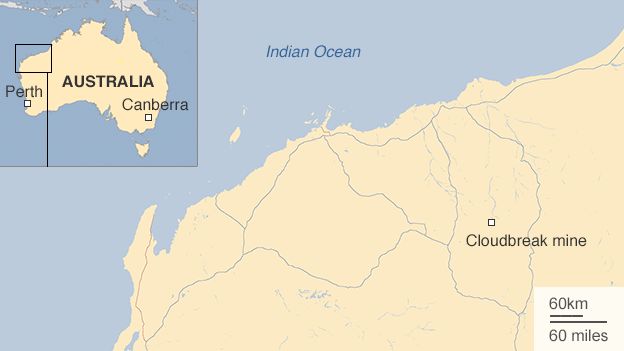 "When you've got young children and you've got a million dollar mortgage and you suddenly can't pay it even after a three months moratorium the bank will foreclose and take that property.

"And (if) you still can't find employment, it really can be quite serious and devastating for some people who've been working in the resource industry for some thirty years and have not known before what it's like to be struggling."

And there's a flow through from family finances to local businesses.

Deborah Napier, who has run businesses in the Pilbara for 20 years, has never seen the market as bad as it is now.

"Revenue has halved and we're having to cut staff to cover the costs. Less people, less money and people's confidence is not there so they're not spending."

Fifteen minutes down the road in Dampier is the Mermaid Hotel. It's in a stunning location, on the water's edge with swaying palms and a perfect view of the setting sun from the terrace.

Inside there's a small crowd of workers having a beer and playing pool.

"I've had my day in the sun but for young people it's tough," says pub owner Keith Bond

Owner Keith Bond says it's a very different scene to the boom times, when there would have been up to 400 people in the bar. He's philosophical about the downturn, but worries about the next generation. "I think one week we lost a thousand people here," he says.

"I've had my day in the sun but for young people it's tough."

There is still money to be made in Karratha, but for those who rode the highs of Australia's mining boom, it's a hard landing.