The White Sands National Monument is a U.S. National Monument located about 16 miles (26 km) southwest of Alamogordo in western Otero County and northeastern Doña Ana County in the state of New Mexico, at an elevation of 4,235 feet (1,291 m). The area is in the mountain-ringed Tularosa Basin ( The Tularosa Basin is a graben basin in the Basin and Range Province and within the Chihuahuan Desert, east of the Rio Grande in southern New Mexico, in the Southwestern United States) and comprises the southern part of a 275 square miles (710 km2) field of white sand dunes composed of gypsum crystals. It is the largest gypsum dune field in the world.

In physical geography, a dune is a hill of sand built by either wind or water flow. Dunes occur in different shapes and sizes, formed by interaction with the flow of air or water. Most kinds of dunes are longer on the windward side where the sand is pushed up the dune and have a shorter "slip face" in the lee of the wind. The valley or trough between dunes is called a slack. A "dune field" is an area covered by extensive sand dunes. Large dune fields are known as ergs. Gypsum is a soft sulfate mineral composed of calcium sulfate dihydrate, with the chemical formula CaSO4·2H2O. It can be used as a fertilizer, is the main constituent in many forms of plaster and in blackboard chalk, and is widely mined. A massive fine-grained white or lightly tinted variety of gypsum, called alabaster, has been used for sculpture by many cultures including Ancient Egypt, Mesopotamia, Ancient Rome, Byzantine empire and the Nottingham alabasters of medieval England. It is the definition of a hardness of 2 on the Mohs scale of mineral hardness. It forms as an evaporite mineral and as a hydration product of anhydrite.

Gypsum is rarely found in the form of sand because it is water-soluble. Normally, rain would dissolve the gypsum and carry it to the sea. The Tularosa Basin is enclosed, meaning that it has no outlet to the sea and that rain that dissolves gypsum from the surrounding San Andres and Sacramento Mountains is trapped within the basin. Thus water either sinks into the ground or forms shallow pools which subsequently dry out and leave gypsum in a crystalline form, called selenite, on the surface. Groundwater that does flow out of the Tularosa Basin flows south into the Hueco Basin. During the last ice age, a lake known as Lake Otero covered much of the basin. When it dried out, it left a large flat area of selenite crystals which is now the Alkali Flat. Another lake, Lake Lucero, at the southwest corner of the park, is a dry lake bed, at one of the lowest points of the basin, which occasionally fills with water.

Preparation for a National Park

Creating a national park in the white sands formation goes back as far as 1898. A group in El Paso had proposed the creation of "Mescalero" National Park. Their idea was for a game hunting preserve, which conflicted with the idea of preservation held by the Department of the Interior, and their plan was not successful. In 1921-1922 Albert Bacon Fall, United States Secretary of the Interior and owner of a large ranch in Three Rivers near White Sands, promoted the idea of a national park there, an "All-Year National Park" that, unlike more northerly parks, would be usable year-round. This idea ran into a number of difficulties and did not succeed. Tom Charles, an Alamogordo insurance agent and civic booster, was influenced by Fall's ideas. By emphasizing the economic benefits, Charles was able to mobilize enough support to have the park created.

On January 18, 1933, President Herbert Hoover created the White Sands National Monument, acting under the authority of the Antiquities Act of 1906. The dedication and grand opening was on April 29, 1934.

Panoramic image of the White Sands National Monument taken along the Alkali Flat trail. The picture was shot on a partly cloudy day in Sept. 2009 by Sheng Liu. 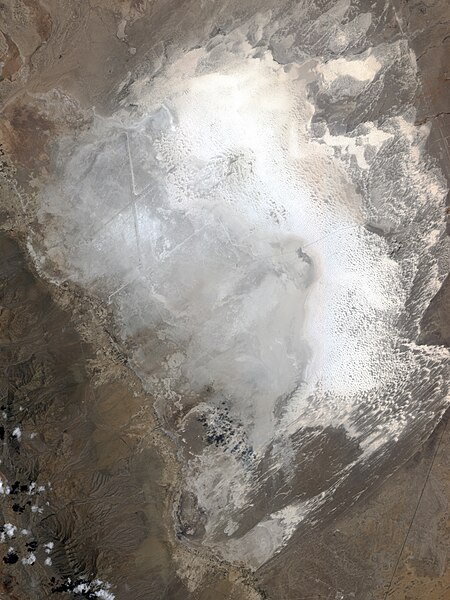 This image shows part of the south-eastern portion of the park. The dunes shown in this image are advancing toward the north-east, and the brilliant white sands contrast with darker soils.