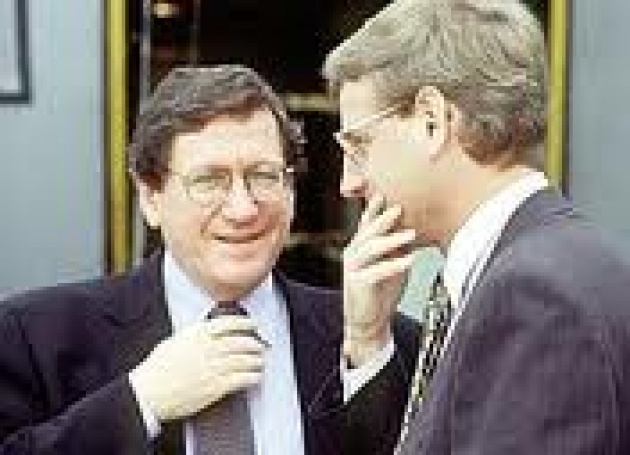 “When he (Carl Bildt) could do something, he was saying that Milosevic was a nice guy, and that is on the transcript. I’m sorry but he does not deserve to be here today”: Florence Hartmann.

“Everybody knows that for three long bloody years this slaughter was at best tolerated, at worstappeased by the diplomatic community and politicians”: Ed Vulliamy."

It seems anyone can show up in Sarajevo, and speak like a friend of a city, country and people left to be erased. The courage of citizen-soldiers that saved Bosnia & Herzegovina then is not reflected in its current politics/leadership. People who were waiting for anxiously for the country and people to fade away just so that it would no longer embarrass them by its suffering, now want to tell us they were always with us-rewrite history with our own ears and sometimes our own mouths.

It took two prominent journalists to finally have the courage to say it straight - Florence Hartmann onetime spokesperson for the ICTY (the International Criminal Tribunal for the former Yugoslavia) and Ed Vulliamy highly acclaimed journalist of The Guardian. (See Full Story at Expatica.com & Copied Below).

Carl Bildt deserves special focus. He was one of the so-called mediators who made the deal with then Serbian dictator Slobodan Milosevic that betrayed Srebrenica and resulted in the “genocide” as ruled by the ICTY and the ICJ (International Court of Justice). Carl Bildt also effected the further division of Sarajevo. (Now, as Foreign Minister of Sweden, he has betrayed the responsibility to his own country and citizens in his dealings with a despotic Ethiopian regime that has jailed 2 Swedish journalists detained in the Ogaden).

Few foreign journalists slammed Friday Swedish Foreign Minister Carl Bildt over his role during the war as he attended the commemoration of 20th anniversary of its beginning.

"It's hurting us. We are Europeans and it's hurting us!," French journalist and writer Florence Hartmann said addressing Bildt, who attended a memorial concert for more than 10,000 victims killed in Sarajevo during the 44-month siege of Bosnia's capital.

"I'm just asking why did he come, why is he comming today on the 6th. He should have come when he could have done something" to avoid the war, said Hartmann, according to a video released by the web portal www.Klix.ba.

From 1995 to 1997 he was also the first High representative of the international community after the signing of Dayton peace accord that ended the conflict.

"When he could do something, he was saying that (late Yugoslav president Slobodan) Milosevic was a nice guy, and that is on the transcript. I'm sorry but he does not deserve to be here today," she said in English.

Milosevic was considered by many one of the key culprits for the war due to his political and military support to Bosnian Serbs.

Hartmann was joined by British colleague working with The Guardian, Ed Vulliamy, who said: "Everybody knows that for three long bloody years this slaughter was at best tolerated, at worst appeased by the diplomatic community and politicians."

People involved in that process should not be in Sarajevo on the anniversary "unless if they are coming to apologise from the bottom of their hearts to the people of Bosnia and the ghosts of the dead," he said.

Twenty years after the beginning of the war in Bosnia, thousands of Bosnians in Sarajevo Friday attended a concert before 11,541 empty chairs, each for a citizen killed by Bosnian Serb forces during the siege of the capital that had lasted during the entire conflict.

15 million children are working and not in school! Shoe cleaner child in street of KabulThis child i…