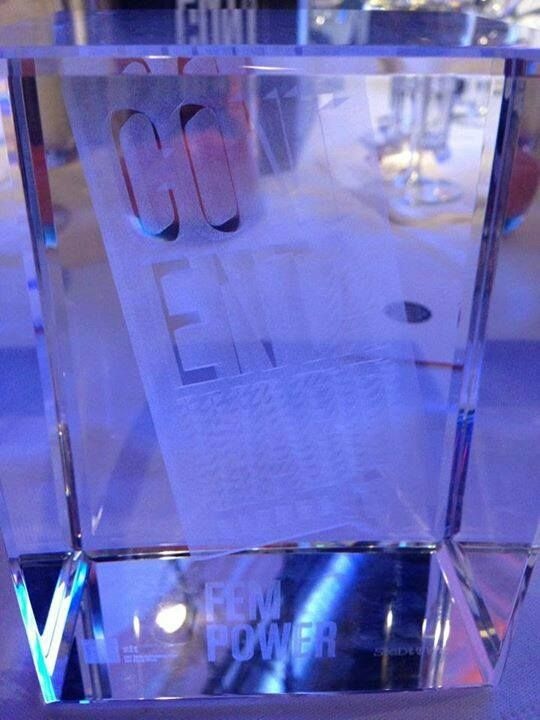 I can finally disclose one of the main reasons for my recent trip to Europe: Digitalista, an initiative to support Women in digital industries was nominated for a Content Award in the category “Fempower”. And I’m happy to announce that we won!

As blessed as I feel to have created this community with eight other awesome women, my stay in Austria was pretty frustrating. At the Female Journalists Congress, which I attended as a speaker (second reason for my trip), one male executive used a lot of clichés in his opening talk (such as females being multi taskers). Knowing that he is the leader of a male dominated Austrian organization, I couldn’t help but wondering why he wouldn’t have more female executives when he spent 10 minutes praising women (still, full of clichés).

What really got me in a downward spiral though was spending almost a week in Upper Austria, a very rural area. I love this place, though conservative is an understatement for what’s going on there. Don’t get me wrong, I know there’s a lot of innovation happening and I know very creative, progressive people who live there. Unfortunately, they are the minority. I feel all I ever accomplished in life and contributed to society (and economy) doesn’t matter there. After all, my main mission as a woman is to raise a bunch of children. As long as I’m not a mother of three, respect the dress code at the local bakery and speak dialect at the grocery store, I’m an insult to my country. This might be drastic, but it really sums up how I felt after a week.

I couldn’t believe that at a meeting with a male architect, he always turned to my partner when answering my questions. It was like I wasn’t even part of the conversation. For a second I was wondering if I got stuck in the Middle Ages. When chatting with a female friend, she talked about a recent conversation with some men about alternative currencies, discrediting herself as the talk being “too high level” for her to understand. It’s like women are just not supposed to be smart, resulting in them feeling super self-conscious, naturally.

With all that, I’m almost ashamed that Digitalista feels entitled to help women in digital industries, when the rest of Austria still has an antiquated perception of women in general. My teachers and parents didn’t tell me I could be a managing editor or correspondent when I grow up. Women were meant to raise children, manage the household and support their husband. Most importantly, never ask any questions. Now with my recent experiences in Austria, I assume that schools still teach their children a traditional family portrait.

Honestly, I don’t know how to move on from this. Will society ever change? l doubt it.  I really tried to be optimistic, but reality proved me wrong lately. Austrian media recently pointed out the increasing migration to the cities (Landflucht) and how small towns in rural areas are struggling because of it. To that I can say: As long as you suggest women to not be too smart and rather stay in their traditional roles, I’m not planning to move back to the countryside. Let alone raise a child only to be brainwashed by your rules of society.

For now, I stop complaining about the lack of women in tech. There’s a bigger discrimination to change.

To wrap it up, I need to mention how many ambitious and talented women I met in Austria in the last few weeks. You rock. Maybe some day we can change society.