Windows 9 and Windows Phone 9 will launch in 2015. And Windows 9 is getting back the Start menu..

We outline what we know about the Windows 9 release date, Windows 9 price and Windows 9 features. Including Windows 9 screenshots, the return of the Windows Start menu and the loss of the Charms bar. Updated on 02/09/14.

It's fair to say that Windows 8 has not been a universal success. In many ways a necessary step not terribly well executed, Windows 8's attempt to stitch together desktop and mobile has been way too radical to encourage new users. And as the longer life of existing PCs and laptops combines with the growth of smartphones and tablets to continually slow PC sales, Window 8 has come to be seen as a dud. This means two things: expect a new and improved Windows in the fastest possible time, and expect it to be called 'Windows 9'. It's unlikely there will be a Windows 8.2, and there definitely won't be a Windows 8.3. (See also: Windows 9 rumours freeze corporate Windows 8 uptake.)

Here we outline what we know about the Windows 9 release date, based on Microsoft communications and credible rumours. We'll also take a look at our analysis of what we expect Windows 9 to cost, as well as listing the features we expect to see in Windows 9. We will of course update this piece as we know more.

Until now (beginning of September), Microsoft has not mentioned Windows 9 by name but the image at the top of the article was posted by the firm's Chinese division on Weibo saying ""Microsoft’s latest OS Windows 9 is coming soon, do you think the start menu at the left bottom will make a come back?". It was quickly removed but cnBeta managed to grab it.

We expect Windows 9 to launch in PCs, laptops, tablets and phones that you can buy in April 2015.

A leaked document, obtained my Myce.com, shows some interesting details about Windows 9, including the 'fact' that the Preview version is scheduled for release between "Q2-Q3 2015". This means the official launch is unlikely to be in April 2015 as previously thought. The Q2-Q3 window is huge, of course, and the Preview could therefore appear any time between April and September 2015. It's possible there will be Christmas 2015 launch to consumers and, given that everything never goes to plan with a new Windows launch, we wouldn't be surprised if you can't buy a new laptop, PC or tablet with Windows 9 until then.

Now, The Verge has reported that Windows 9 will be unveiled on 30 September where it will show a preview of the new operating system.

"This date may change, but the Threshold version of Windows is currently in development and Microsoft plans to release a preview version of what will likely be named Windows 9 to developers on September 30th or shortly afterwards," said The Verge.

The document has a section detailing 'update items' which include changes to the Metro UI (Microsoft still calls the modern UI Metro internally, apparently), Windows Defender, OneDrive and improved Windows activation. There's also a mention of Cortana, Windows Phone 8.1′s personal assistant, which could mean it's coming to Windows 9.

Winbeta claims that in Windows 9, Microsoft will do away with the Charms bar – that menu which pops in from the right with buttons like search, share, start and settings. However, the site is talking about Windows 9 on the desktop as the feature will remain as it is on tablets.

If you're wondering what the new regime will be, Winbeta said: "One method that we heard about that stands out is having a button up near the window controls that once pressed, would reveal the Search, Share, Devices and Settings charms from the top of the window (there's no need for a Start Button for desktop users in the charms.)"

"Another idea Microsoft have been toying with is removing the Charms completely. While it's possible, we're not entirely sure how that would work," it added.

As we explain below we are certain that the new Windows update known as 'Threshold' will grow up to be Windows 9. And we expect Windows 9 to launch at some stage in early 2015, probably April 2015. This week we have seen what its claimed are leaked screenshots of Windows 9. Just to confuse things, these shots are labelled 'Windows 8.1 Pro', but that is consistant with what we have been hearing about the Threshold build that will eventually become Windows 9.

Look to the lefthand side of the new Start menu in both Start menu shots and you can see a list of recently used apps and the option to select a list of 'All apps'. One interesting point to note is that 'All apps' appears to include both Desktop- and Metro apps. The key to Windows 9 is marrying up the two disparate elements of Windows 8 in a way that makes sense to consumers. This way Microsoft can satisfy both those users who miss the Start menu, and also make Metro apps more useful.

Microsoft hasn't lost its taste for uncomfortable compromise, however. Strong rumours suggest that the expanded Start menu will appear within a more 'Desktop' Start screen and in the Desktop for PC- and laptops users. But that the same, expanded, Start menu may take over the entire Start screen for tablets and other smaller touchscreen devices.

Now look over to the right for another symbol of the same movement. To the right of the apps list is an area with pinned Metro apps. So as now you can see from the Start screen live tiles for important apps such as weather, mail, news, and calendar. Just as now the new Windows 9 Start screen is customisable, it seems, but here you can also pin Desktop Windows software. On both sets of screenshots you can see icons for the Pictures and Documents folders, as well as what looks like a 'My PC' tile that gets you straight into the file system.

Talking of Cortana, the document also mentions Windows Phone 9, which is tagged alongside Windows 9 for a Q2-Q3 Preview release. We're only just seeing new smartphones runningWindows Phone 8.1 - the first version to feature Cortana - but in a year's time Windows Phone 8 will be consigned to the history book. Let's just hope that existing hardware will be upgradeable and that owners don't end up in the same situation as Windows Phone 7 buyers did.

Based on Microsoft's Build 2014 developer conference, we've put together an article looking at the future of Windows - beyond even Windows 9.

We expect to see a single beta of Windows 9, which will likely appear in the summer of 2014. If everything goes perfectly it is possible that Microsoft will release a Release Candidate version at the end of August or the beginning of September 2014. That date could easily slip.

Once a RC is released, bugs will be collected and fixed for several months before the final code is released to manufacturers. On this basis, it makes sense to see a Preview version from April 2015 onwards. (See also: How to use Windows 8: 10 tips to get you started on Windows 8.)

There's no word on what Windows 9 will cost, but we can make an educated guess. We'll update this piece as we know more.

How to price Windows 9? This is the classic innovator's dilemna: Microsoft has existing products that make it a lot of money, but is building new and better products for which it cannot charge as much. The market has changed. Apple gives away the most recent version of OS X for free, and PC- and laptop makers are feeling the pinch as smartphones and tablets eat into their markets.

So how much will Windows 9 cost? Not a lot.

I wouldn't be surprised if it was free to consumers, although not to OEMs who purchase licences to put on PCs and laptops they sell. Even if customers have to pay to upgrade to Windows 9 they won't have to pay much. Just a few pounds.

We expect that Windows 9 will be 64-bit only, although we expected that for Windows 8 and we were wrong. A lot depends - as ever with Microsoft - on what OEMs want to build, and what Intel gives them with which to build.

One thing that Microsoft has to do is allow Windows Phone and Windows RT apps to run on both Windows Phone and Windows. Even Xbox apps should become cross compatible. You may also be able to pin Metro apps to the taskbar. Also expect to see Kinect-based 3D gestures to be enabled for laptops with 3D cameras - basically the ability to control your computer with gestures.

Microsoft's recent pronouncements suggest a full return of the Start menu and that Windows 8-style apps will be able to run on the desktop. Windows 9 will definitely be less traumatic a chance for desktop users.

One key - although less obvious - development is likely to be much improved power management. The rise of mobile devices has made battery life a key battle ground for Windows. Intel has done its part, massively improving power management with its latest generation of mobile processors. But the Windows software needs to keep pace, so expect Microsoft to make great claims for Windows 9's power management capabilities. 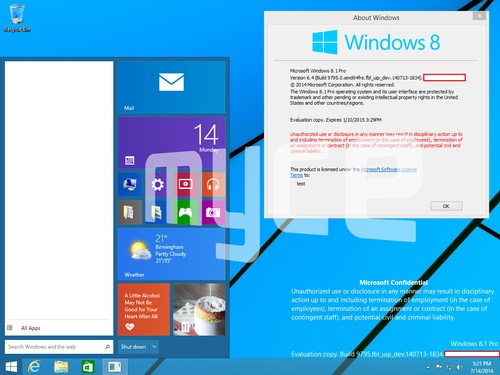 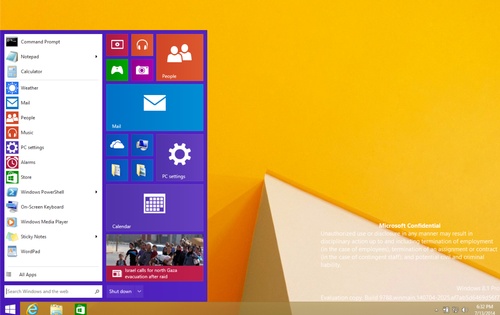 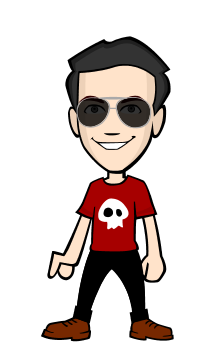