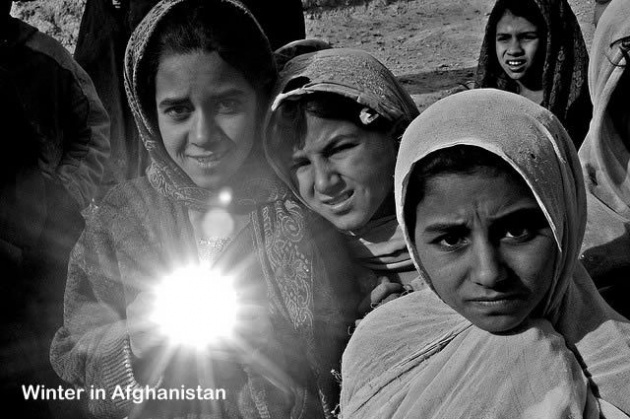 I remember growing up in the beautiful city of Herat and though we didn’t have many cold days in Herat, I was there during the Taliban regime—the years when we had to stay inside.

We were seven children; I’m the fifth. In the winter my mother roasted sesame, watermelon, and melon seeds and we all sat around the square table covered with a thick quilt. We put a metal bowl of hot charcoal covered with ash inside of the table. We put soft mattresses around it with big pillows to lean on and then put our legs under the blanket to stay warm.

It was hard to find good books to keep me occupied during the long hours of the day, so I kept busy rereading the few books I had. My oldest sister worked for Doctors without Borders and when her female colleagues came to visit, they brought puzzles and children’s books. TV was prohibited but some nights my brother borrowed his friend’s video player and we watched movies. We had to be very careful that the Taliban wouldn’t find out about the movies.

On long afternoons and evenings, we listened to stories told by my parents and older siblings. All the stories had a moral connected to our traditions. My favorites were Baba Kharkash and Yellow Caw; I listened to them over and over and imagined myself in those stories.

Every Yalda night, the longest night of the year, my father told stories from his life growing up in the village during the 1950s and 1960s. He told how life was peaceful and people lived simply without competing with each other.

He told us how on those long winter nights, people gathered in my grandfather’s house because he was Arbab—the village’s master. Villagers brought mulberries, raisins, and pistachios they had collected and dried in the autumn. They would choose someone who could read. The only books they had were Amir Arsalan Rumi, Najma, Mullah Nasruldin, and Hamzeh. There was no electricity; they had a homemade lantern that created a lot of smoke. By midnight everyone returned to their homes, to come back the next night to hear more of the story.

Another old tradition my father told us about was Barfi. It means Snowy. On the first snow of the year, people would put some snow in an envelope with a note that said Barf az ma, Barfi az shama.

They would take the envelope to their neighbors or relatives and if the person handed the envelope was smart and quick, he would run after them, take him home and rub coal in his face to make it black. But if he failed to catch the sender of the envelope, the receiver became Barfi. Barfiwould have to invite the entire family for a big lunch or dinner.

My mother worked hard to prepare these. To make Gholurshir, she crushed wheat and boiled it with milk and then dried it. Gholur Troosh is harder to make, but all I remember is she used a lot of turmeric. I remember how we washed our hands, then my older sister sliced the bread into the bowls and my mother poured the soup on top. We ate with our hands—it was more delicious to eat with hands than spoons.

My mother also made Torshi—the sour dish with pickles, vegetables, garlic, vinegar, or brine and we ate this throughout the winter. Kichiri Goshti was only for Friday night or when we had guests.

My least favorite part of winter was taking a bath. Now we have public bathrooms where women can go and stay an hour to wash themselves and their children without feeling shy. But during the Taliban regime only men were allowed to go to the public bath so we had to heat water at home to take a bath. Once, the smoke almost killed me; I was unconscious for a few minutes.

Now, my mother doesn’t like winter. Things get more expensive in winter. She used to say that winter is the death of poor people. She had to work extra hard to start a fire outside to make fresh bread for us, and she couldn’t send the children outside to play. Sometimes I asked my mother if I could go to the bazaar with her. At that time all the women wore blue burqas, and the only thing that helped me recognize her were her shoes. Once I followed another woman for a long distance until I realized that she was not my mother. I had to find my way home alone.

At night my mother would make our beds and we five sisters slept next to each other to keep warm. One night I had a fight with my sister and I went to bed crying. I was dreaming about the fight and woke up pulling my sister’s hair. To my bad luck it was the wrong sister. Another time my aunt and her family came to our home. I pushed my cousin and he hit the floor. My mother came to slap me, but suddenly the electricity went off and my mother slapped my cousin instead.

The end of winter is my favorite part of the season. Herat has the freshest weather at that time. We would go to the village where my father grew up, take our lunches and make tea and enjoy the smell of the lilies. Sometimes we joined the village women to collect Badinjak and other vegetables.

The first day of the spring in March is our New Year, or Nowruz. During the Taliban we went to our farm to celebrate Nowruz. We brought our music and hid our tape recorder under our carpets.

Since the fall of the Taliban, people are free to take their families out and celebrate the New Year in Herat’s beautiful and famous places like Takhte Safar, Puli Malan, Shaydayee, Puli Poshto, and Kamar Kalagh.

We can learn a lesson from the winter season. Winter taught me that no matter how harsh life becomes, I can always find a way to survive. If every season were spring, life would become boring and we would no longer enjoy the spring blossoms.

Our childhood memories help shape our lives. Although I grew up during the Taliban regime and had a tough childhood, those difficult days made me who I am today. Because I know how it felt to grow up during the war with limited rights, I am working to help people of my country, especially children and women whose pain I feel the most.