Women: The newest edition to the world's oldest sport!

It has been an emotional roller coaster since the moment we got the ball rolling with working with the U.S. Women’s Freestyle Team.  The girls took off to the University nationals and conducted special wrestle-offs for the Pan American Team.  Meanwhile, I was here shifting through the 2,000 plus beautiful shots of our elite female athletes.  The plan was to montage them into a poster to sell for $20 at the national tournament.

Teammate, Veronica Carlson started on the project right away, but quickly ran into the issue of lighting a resolution.  Because we borrowed our lighting and it wasn’t on a timed flash, the camera picked up subtle movements and the images weren’t as crisp as we’d hoped them to be.  Maybe we could have ran with it, if not for the obvious difference in lighting, which caused the white tank tops to appear different colors when placed side by side.

I’m not going to lie.  For a little bit, I felt like a failure and to top it all off, there was the murmur of mean people.  Just sang "Can't nobody take my stride, can't nobody hold me down...oh no...I've got to keep on moving" at the top of my lungs:-)

Fortunately, I have a fantastic support system and a wonderful singing voice so I quickly recovered.  There was nothing wrong with the images by themselves.  It was my job now to determine what was usable about them and what else we could use as a contingency plan to accomplish the same objective.

Along with my team, we decided that the beauty shots could be used for the profile page on Chick Wrestler.  Users can log on and see each athlete and a short flash video of their wrestling.  This will take time and energy to do correctly, but I cannot put sub standard work out there and expect people to take us seriously.  In the very short term I will create a best of the best photo album for the individuals that attended the photo shoot and allow them to use and share them as the see fit.

As for the fundraising project, I couldn’t be happier with the final project.  We used an image from a previous shoot with Matt Hernandez Creative.  I love everything about it, mainly because it not only EMPOWERS the women’s team to take ownership of their role in Olympic Wrestling, but the efforts have been supported by other large, successful organizations which validates that we are here to stay.  Now that the project is complete and all parties are completely happy with the final product…we can more forward with printing and sales.

While sales are nerve racking in and of itself, I not only pray for the return on investment, but the strength to hustle,  and the capacity of others to realize my vision to support the Women in Olympic Wrestling. 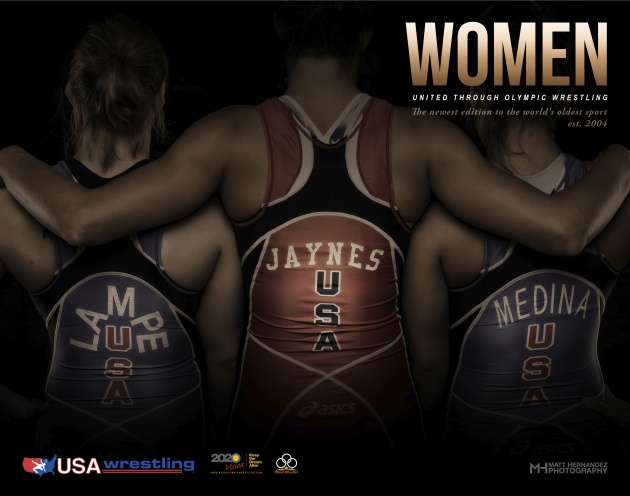