Wreck It Ralph: A Game and Eye-Opening Disney Film

Wreck It Ralph: A Game and Eye-Opening Disney Film

Playing games is fun. It passes the time when you just need to relax while still flexing your thinking cap and reflexes in an enjoyable manner. It feels rewarding when you finish a level and pass levels of difficulty that you thought you couldn't handle.

You, almost always, play the protagonist of the game. Each game has a story (or back story) usually incorporated in-game, in which objectives and/or missions are formed. Most of the time, you need to stop the so-called villain from its evil intent in a specific place, or all of creation and the universe. 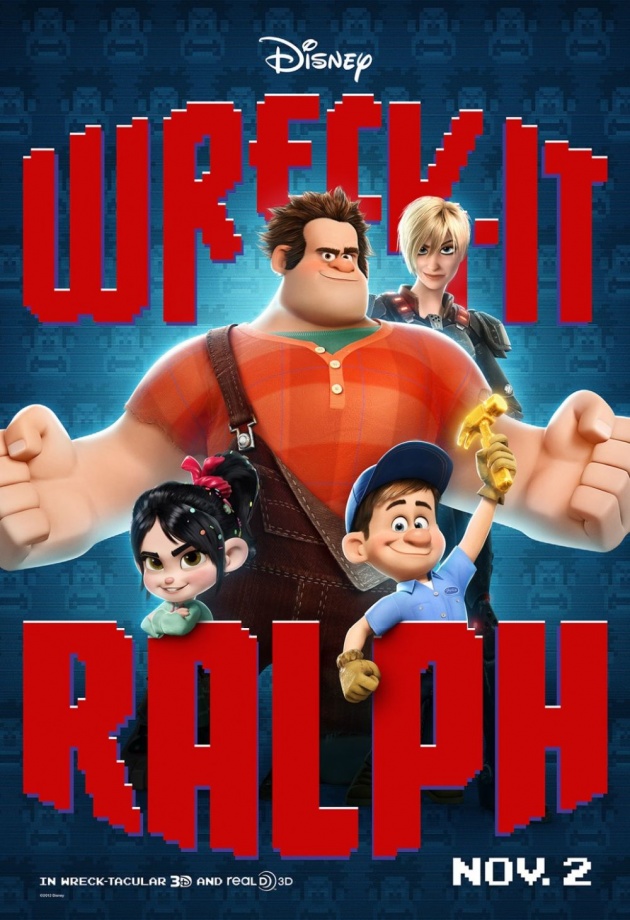 Wreck It Ralph has a unique approach in storytelling what's goes inside a digital game, specifically the ones found in an arcade. Game characters portray their roles when a human plays their program, but when nobody's watching, or when the arcade is closed, we get to see different personalities apart from what they depict. Villains can be depressed or kindhearted too.

But they aren't just confined into their separate machines. Because the arcade owner has an octopus outlet, in which all arcade cabinets are electrically connected, all game characters can cross to different machines. What's more is that they call it the terminal, which looks much like a train terminal, complete (digital) with inspectors.

If a machine gets plugged off, the station – in which its name come from the arcade game its connected to – gets out of service, but game characters can still live off the terminal. However, it's kind of worrying that they get to live as hobos inside the terminal. What's more worrying is that if you're just a character glitch in a game, you won't be able to crossover the terminal. Nonetheless, Wreck It Ralph made a good solution to these problems.

Characters can also tweak their game programs, provided they know how to access the source code by punching a set of combinations on a game controller. If fallen into the wrong hands, it could cause game characters to play different roles depending on what they've been programmed anew.

In a motion picture, we usually follow the story of the main characters. Characters – their backstories, personalities and motives, are what drives the story forward. In Wreck It Ralph, I find 5 characters that propels the story:

He's the main character of the movie, hence the title. He's a villain in their game but is a good-natured fellow who merely wants recognition and acceptance from his colleagues.

She's regarded a glitch in the game called Sugar Rush, a kind of racing game where their world is made up of sweets. She only wants to compete but is treated an outcast by other racers.

The protagonist from the game: Fix-It Felix Jr, which is Ralph's in-game nemesis. He's a generally nice chum but is kind of a colleague pleaser. He takes it upon himself to save their game from shutting down for good when Ralph goes missing.

Calhoun is a non-playable character in the game Hero's Duty. She teamed up with Felix to search for the missing Hero's Duty spacecraft with Ralph (and her in-game monster, a cy-bug) inside. She's a tough nut but has a soft side.

King Candy is the one who facilitates the race inside Sugar Rush. He's a bit of an enforcer in their game, often calling his henchmen to arrest intruders like Ralph, Felix and Vanellope.

Ralph, also called Wreck-It Ralph, is an arcade game character programmed to break a building while Fix-It Felix, fixes it and gets a medal every time. When the arcade closes, he resides on a large pile of bricks while Felix and the building tenants throw a party. This makes Ralph sad so he attends a the villains' support group meeting to talk about their sorrows in life. 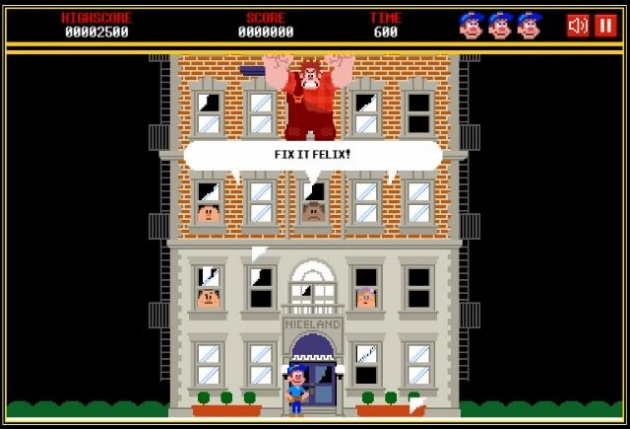 Ralph has had enough of this pattern so he gatecrashes the tenants' party and wanted to eat cake. When he saw the cake designed like their game where he's on the bottom on a pile of mud, he gets jealous about Felix and wanted to prove himself that he can get a medal of his own to earn his place in the building.

Off he goes to an arcade game Tapper (which is like a bar) to drown his sorrows. He bumped into a Hero's Duty trooper who was fed up of their game's program and mentions getting a medal when the player makes its way to the top. Ralph “borrows” the trooper's suit and goes into Hero's Duty station.

He's sloppy at Hero's Duty, but as the game restarts, he sneaks into the tower and finds his way up to get the medal. He gets one, but accidentally awaken cy-bugs, in which one made its way to the escape pod Ralph was into. They crashed all over the terminal and finally dived inside the game, Sugar Rush.

As Ralph retrieves the medal, an in-game character named Vanellope, who acknowledges the medal as a coin, snatched it from him so she could compete in Sugar Rush. Vanellope tosses the medal to the cup to enter the competition, but King Candy tries to seize her. 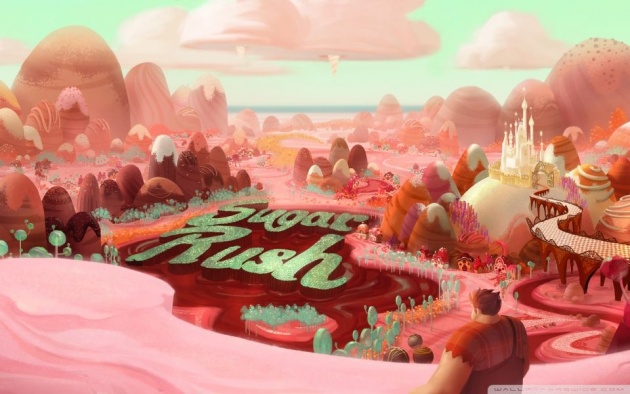 Meanwhile, without Wreck It Ralph in Fix-It Felix Jr. game, the arcade owner puts the game out of order, and this is where Felix looks for Ralph. Q*bert, a hobo in the terminal, informs Felix about Ralph's whereabouts; he bumps into Sgt. Calhoun who's trying to look for the cy-bug. They parted ways out of “uneasiness,” where Felix was soon captured and Calhoun found the cy-bug spawn.

Vanellope makes a car out of sweets but the other racers destroy it. Ralph saves her, and they made a pact to make her a new one in exchange for coin/medal that she'll win in the race. They sneaked into a car factory to make one and practiced in a secret abandoned level—the coke-mentos volcano–which had also been Vanellope's hideout.

King Candy manages to find Ralph and gives him back the medal, in return for Vanellope to not compete, because their game might be put out of commission if the human player sees Vanellope glitching (appearing like a glowing blue wireframe and teleporting every now and then). Ralph agrees and destroys her car. He goes back to his game with the medal but he learns that Felix and the tenants already left. While still in their machine, he sees that Vanellope painted on the side of Sugar Rush's machine.

Ralph goes back and frees the imprisoned Felix and Vanellope. Felix fixes her car, and she made it in time to compete. She was winning the game until King Candy stops him. His contact with her glitching causes him to reveal his real form, Turbo, the one who decommissioned his game and another's for his own selfishness. While racing, a horde of cy-bugs destroys Sugar Rush and the finish line, and eats Turbo. Everyone makes way to the terminal except Vanellope who can't crossover.

Calhoun says that the cy-bugs are attracted to and get destroyed a beacon. Ralph then makes his way to the Coke-Mentos volcano and after many attempts because of Turbo interfering, manages to erupt it and destroy all cy-bugs (with Turbo-chimera) in Sugar Rush. Afterwards, Felix fixes the finish line, Vanellope crosses it and the Sugar Rush was reprogrammed.

Obviously, this is made for kids, but knowing Disney, even kids at heart will be entertained and enjoy this movie. This has one of the best concepts Disney ever made to date, taking the art form of film to a notch by including famous arcade game characters like Ryu, Ken and Zangief (Street Fighter), Pac-man,  Q*bert , Bowser, and Sonic and Robotnik (Sonic the Hedgehog). How much did they pay for these cameos I have no idea, but it's cool to see them even for merely seconds. 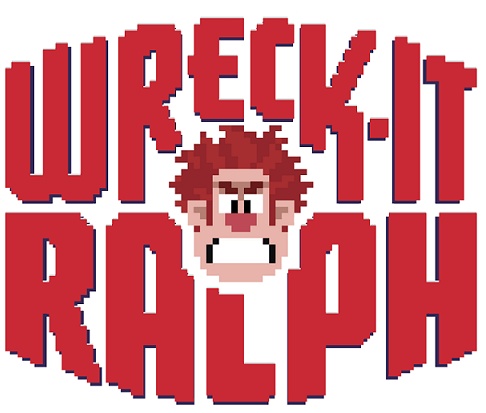 The show has not without story morals of course. But one thing that makes this film even cooler is how they humanize game villains. It's like a different take on perspectives. Someone regarded as evil or bad, has actually redeemable qualities, some we can sympathize to when the camera stops rolling. The coin has two sides after all.

Disclaimer: pictures, videos and write up are originally shot/written by lapiz-lazuli, unless otherwise stated. Wreck-It Ralph (digital content, merchandise) is property by Disney. Views and opinions on this blog post are truthful, but subjective, and are not influenced by sponsorship of any sort.