Xbox One Gets Over-The-Air TV Powers In The U.S. And Canada 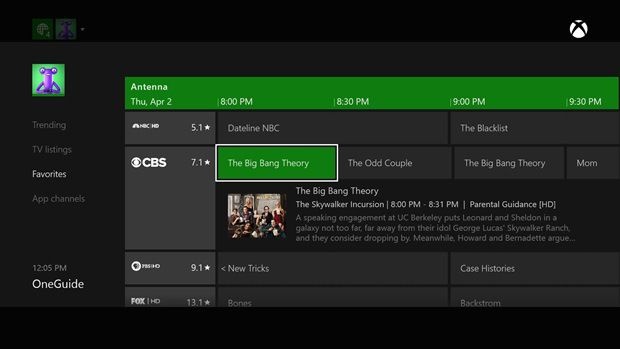 Xbox One owners have a new way to get TV on their console: The game machinesupports over-the-air TV now for those in the Xbox One Preview program, and in the coming months for everyone else, provided that you also pick up an $80 Hauppauge WinTV-955Q TV tuner and an HDTV antenna.

Xbox is also working with Hauppauge to make it even cheaper to get on board, with a $60 tuner panned for availability sometime in the “next few month” and made available across the U.S. and Canada. Provided you get the right kind of HDTV antenna, and are within range of over-the-air broadcast stations, you’ll be able to use the tune and antenna hardware plugged into your Xbox One to get both OneGuide and MiniGuide overlays on the console showing you programming information.

Over-the-air TV works with Xbox One’s snap feature, letting you put it to the right side and giving you the rest of the screen area for playing games or using other applications, and you can even pause live TV for up to 30 minutes, with Xbox One handling caching of the programming so you can pick up right where you left off.

You can add favorite channels on the console, and even change channels using voice commands via Kinect. Over-the-air channels can even be streamed to Xbox One SmartGlass apps on Windows, Windows Phone, iOS and Android for remote viewing around the house.

I love to play Halo on Xbox. I started out playing Halo: Combat Evolved on my Older Brothers Origin…

Top 3 Most Used Gaming Platforms In The World.

Video Games are very much into our lives now a days. Every person of different age play video games …

Computer game Evolution - Just what Could Perhaps Be Coming? A COMPUTER video game is a video game …