The word Xerography in the Greek language is the combination of two words xeros and graphos. The xeros mean dry and graphos mean writing. The xerography means dry writing which is a photocopy. 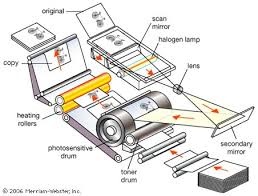 The photocopy machine consists of a drum, which is made of an aluminum cylinder coated with layer of selenium. The aluminum is an excellent conductor where selenium is insulator in the dark and conductor in the presence of light. Hence selenium is photo conductor. When the positive charge is sprinkled over the selenium, it will remains there, as long as it remains in the dark. But when the drum is exposed to light, the electrons from the selenium pass through the conducting selenium and neutralizes the positive charge. 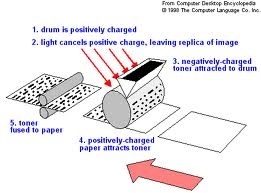 If the drum is exposed to an image of the documents to be copied, the dark and bright areas of the document produces similar areas on the drum. The dark areas maintain there positive charge but the lighted areas becomes conducting and lose their positive charges and becomes electrically neutral. 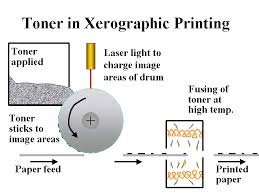 In this way a positive charge image of the document remains present on the selenium surface. A dry black powder called toner is given a negative charge and is spread over the drum where it sticks to the positive charged areas. The toner from the drum is transferred on the sheet of paper on which the document is to be copied. Thereafter the heated pressure rollers melt the toner into the paper to produce the permanent print that is photocopy. 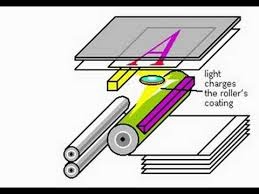 An inkjet printer is a type of printer, which uses electric charges in its operation. The inkjet printer consists of print head, nozzle, charging electrode, deflecting plates, gutter and paper. The print head ejects a steady flow of ink when shutting back and forth on the paper. When the ink comes out from the nozzle it brakes up into extremely small droplets. These droplet passes through a charging electrode and deflecting plates. 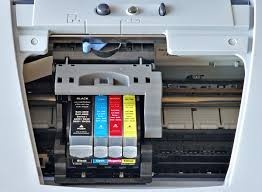 When the print head pass over the regions of the paper which are not to be inked the charging electrode becomes on and the ink droplets pass through the deflecting plates.

An electric force due to charge on them deflects these charge ink droplet into the gutter and thus unable to reach the paper. But whenever ink is to be placed on the paper for printing these charging electrode is turned off by charging control responding to computer. 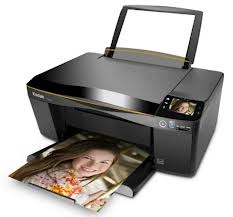 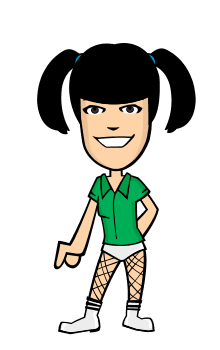