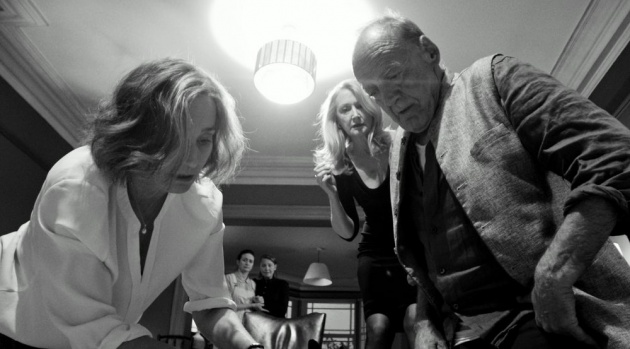 Making a difference – what does it mean? It could be a random act of kindness, or else an intervention to stop a person making a terrible mistake that would otherwise hurt themselves or others. It could be throwing oneself in front of a bullet that might otherwise hit someone else. It could be using your skills to help people.

However you define it, making a difference is active, taking a decision that affects people in the real world.

Janet (Kristin Scott Thomas), the protagonist of writer-director Sally Potter’s new film, The Party, is a politician who has been promoted to Shadow Minister of Health in the official opposition to the British Government. She is told by her friends that, at last, she can make a difference. It is inferred that, up until this point, she has been a passionate campaigner.

Reality check: if she joins the opposition front benches, she can basically do the following:

·         Deliver the second speech in a debate about health legislation

Any Member of Parliament can already do three out of four of these things. Making the second speech after a piece of legislation is proposed does not really amount to much. In any case, it is not what you would automatically define as making a difference.

Still, Janet’s friends are pleased for her - so pleased that they are coming to her house to eat her food in celebration.

If I wanted to congratulate my friend, I would invite him for a drink (my treat). I would not prevail upon him to do the cooking. 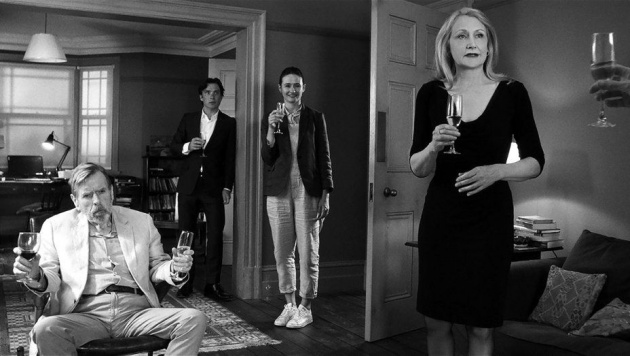 The Britain depicted in Potter’s film isn’t one that corresponds to reality. Worse, Janet has prepared vol au vents. I do not know anyone who still serves vol au vents unless they are being ironic (‘how very 1970s; I thought vol au vent was a resort in the South of France’; ‘you mean cul de sac’; ‘no, fruits de la mer’).

But that’s not the only thing. Janet doesn’t notice that her husband, Bill (Timothy Spall) is being solitary, listening to music and drinking too much. He’s an academic so I suppose that gives him a licence. You would expect Janet to cancel the soiree and divine through a mixture of interrogation and standing in front of the record player the source of Bill’s distemper. In any case, in front of his wife’s friends, he makes an announcement.

We know that Janet’s party will not end well. We see her at the start of the film answering the door and pointing a gun. That’s no way to treat the pizza delivery man! Clearly, she has placed her senses in cryogenic storage.

The beginning of a phrase comes to mind: ‘with friends like these...’ Janet’s friends are a misfit troupe, a repertory company unsuited to drama. There is Janet’s best friend, April (Patricia Clarkson) whose two basic modes are withering and sarcastic. April is a belittler and American to boot. She is married to or in a relationship with Gottfried (Bruno Ganz). I don’t know any Gottfrieds, except for Gottfried von Einem, the composer of the opera, Danton’s Death; Gilbert Gottfried the comedian does not count. Gottfried, one imagines, is the only German who could eat vol au vents without irony, but he still makes a mess. Gottfried is described as a life coach. I have never really understood that title. A life couch makes much more sense – that is a settee with a lifetime guarantee that it would never sag or else make off with the amount of lost coins that it has secreted in its many folds (or manifolds). Life coaches basically advocate transcendental meditation, or as I call it, falling asleep in front of the telly. They encourage you to find your oasis of calm, to live in that centre and breathe, breathe slowly... Slowly... Slowly... - time’s up, I’ll see you next week. Let myself out, yeah? I’ll take that two hundred off the mantelpiece. You paid by direct debit? Loser!

I understand why April thinks her partner is self-centred – it’s in the job description. Gottfried has also developed emotional armour to withstand her withering asides, although a set of headphones would be just as good.

Janet’s other friends are the same sex couple, American Martha and Brit Jinny (Cherry Jones and Emily Mortimer). To have one American in your acquaintance might be seen as a misfortune, to have two is just lazy casting. You are more likely to work with an Asian or a Scot. Jinny is expecting the couple’s first child, also their second child and their third. Triplets – talk about putting all your eggs in one basket. The couple isn’t completely ready for same sex parenthood times three. Should there be one bedroom or several? Who gets the top bunk? Jinny is very moody, but not as moody as the fifth guest, Tom (Cillian Murphy) who no sooner than he arrives, carrying a gun, than he snorts a line of cocaine. Tom’s wife is running late. Even so, if you are in a relationship and are making your way to a party, you don’t arrive separately, unless one of you is a doctor on call or else you derive sadistic pleasure in leaving her to her zipper, something I do not advocate, especially in the current climate.

If you know your late Nineteenth Century Nordic literature, you’ll know that a gun introduced in Act One really ought not to be kept in a writing desk (see Ibsen’s Hedda Gabler). It will also go off in Act Three. In some productions of Hedda Gabler, the pistol is replaced with a hunting rifle and the writing desk with a settee. (‘Take a seat‘ – bang!) So it is with Potter’s gun. Tom tries to hide it in the recycling, but he put it in the wrong bin - not with the glass and plastics, silly. Naturally, Janet makes an unexpected discovery.

The Party is a miserly seventy-one minutes in duration. At times, it feels like a drama set in 1971. It is photographed in black and white, as a riposte to heady modernism. Although it is a throwback, it feels like it should have been thrown out, so creaky, casual and clumsy is the drama. It is the polar opposite of (so-called) kitchen sink realism. I can see why Potter would have thought that monochrome was a shrewd commercial move; 50 Shades of Grey is absurdly popular.

The events are plain weird. Throughout the first part, Janet receives phone calls from an admirer. She is pleased to receive them and blushes a shade of off-white. Then there is a revelation and she expresses her anger physically. Do we side with her or think she is a hypocrite?  Events all build to a punch line.

The amazing thing about The Party is that Tom owns a gun. In the United Kingdom, we have restrictive firearms laws that prevent people from acquiring weapons for anything other than killing animals – lobster shooting is a popular sport. It is a dramatic contrivance in a film filled with them. The most logical response to The Party is to sigh deeply and remark, ‘really?’

Yet there is purpose in Potter’s unreality. She is not known for naturalism, rather dramatic leaps. Her most critically acclaimed film is an adaptation of Virginia Woolf’s Orlando, in which the titular protagonist (played by Tilda Swinton) lives for two hundred years and changes gender. Potter took the leading role in her film The Tango Lesson, in which she plays a blocked filmmaker who travels to Argentina to learn that famous dance - if anyone is a natural contestant for Strictly Come Dancing or Dancing with Experimental Filmmakers as it is known in the States, it is she. Her 2004 film, Yes, was spoken in verse/though I confess/I have not seen it. Her film Rage about the fashion industry was a series of direct addresses to camera. Potter likes to zero in on the conventions of visual storytelling and play with them. I don’t think she has a radical agenda, more a couple of footnotes.

Scott Thomas’ vivid central performance elevates The Party to something approaching drama. She plays it straight, which, if you have to say ‘I have vol au vents in the oven’ takes some doing. I didn’t believe in the supporting cast, but I understand that Potter wants to normalise same sex relationships (hurrah for her) and life coaches (hiss). At best, The Party is an amusing diversion that doesn’t outstay its welcome. The real time storytelling maintains the viewer’s attention. You want to know what happens next, even if the jokes are creaky and you don’t believe in it.