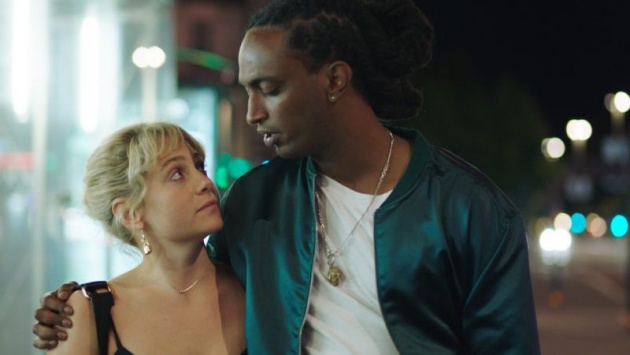 Pictured 'He loves me, he loves me maybe.' Mika (Fanni Metelius) and Tesfay (Ahmed Berhan) in 'The Heart' (Hjãrtet), written, directed and edited by Fanni Metelius. Still courtesy of M-Appeal

The Heart (Hjãrtet), the debut feature from Swedish thirty-year old writer-director-actress Fanni Metelius, begins with a conversation that many of us have had during our lifetime, though hopefully only once: do you masturbate? Mika (Metelius) doesn’t believe in pleasuring herself, which is to say she is wearing a ‘situation vacant’ sign around her neck. Listening in is Tesfay (Ahmed Berhan), a fellow student – she’s into photography, he into music production. He complements her on the music on her personal music player – the only decent music played at the party they both attended, apparently. Mika is attracted to him. He’s tall, of African descent, has tattoos and fixes her with a stare that is difficult to read. You sense that Mika is not like any women he has known to this point. They probably wouldn’t allow a man to join in a conversation about masturbation. To be fair, he doesn’t offer a confession about his own self-pleasuring habits. You wouldn’t in mixed company. In any case, there is an unsaid assumption that all men self-pleasure once they have ‘discovered’ the capacity for joy in their fudge packet. In some cultures it is considered a sin and a source of blindness, especially if you rub your eyes afterwards.

Such conventional sexual frankness is at the heart of The Heart, which really ought to be called ‘The eternal mystery of why men stop wanting sex with their girlfriends after a certain point’. This is not a mystery at all. Desire is based on what you cannot have and can be unhealthy. Advertising and morality both teach us what to want. Many of us are not persuaded. What we actually want gives us pleasure, comfort and renewal, but is also a bit unpredictable too. There is also what we want now and what we want for the rest of our lives. Desire is always managed through compromise.

Tesfay doesn’t immediate want Mika. He says he is afraid that having sex will ruin their friendship. There is the sense that he is the one being wanted and some guys aren’t used to that. If a personal stereo jumped off a store shelf and said, ‘I want you’, you’d be pretty freaked out. Actually, you’d be thinking, ‘there’s a hidden camera somewhere – I hate those TV shows’. Needless to say, you would make your excuses.

Mika and Tesfay do begin a sexual relationship, but then Tesfay moves to Stockholm. Mika lives in Gothenberg. Bummer. Mika doesn’t try to sell to Tesfay the attraction of Gothenburg’s Volvo Museum or the delights of Liseberg amusement park. Stockholm has incredible allure. Plenty of famous music producers have emerged from its scene like Tim Bergling aka Avicii - his excessive drinking led to inflammation of the pancreas, the artist still not yet thirty.

Early on, there is a conversation that says something about how kids feel today. One guy is ridiculed for having an apartment in central Stockholm purchased by his father. He didn’t have to struggle for it. These kids are material, but they also want to deserve what they get - the moral side of desire. One of Mika’s friends says ‘we try to be good left wingers like our parents’. There is a qualification: they don’t have to fight. There are few causes to unite young Swedish kids that give them a sense of purpose. Where is an oppressive patriarchy to overthrow when you need it?

Mika takes the next step and moves to Stockholm to live with Tesfay. We get the symbolic scene of the couple carrying a mattress up to their apartment. There are very few memorable ‘mattress carrying’ scenes in world cinema, but my favourite – the only one that springs to mind (pun inevitable) – is Paddy Considine lugging a mattress on his back down the street in Jim Sheridan’s autobiographical drama, In America. Metelius edited her film at her house - I should have added editor to her hyphenate - but I felt that not every shot was necessary. Music videos have a lot to answer for – they encourage the inessential.

At the clothing store where Mika gets a job – she is the only one doing the folding – there is talk about the weekend. What will Mika do? She doesn’t know the city that well. One colleague is going to multiple parties – there is so much going on – but another extols the virtues of staying at home. This is, as it turns out, Mika’s fate. She and Tesfay play video games. 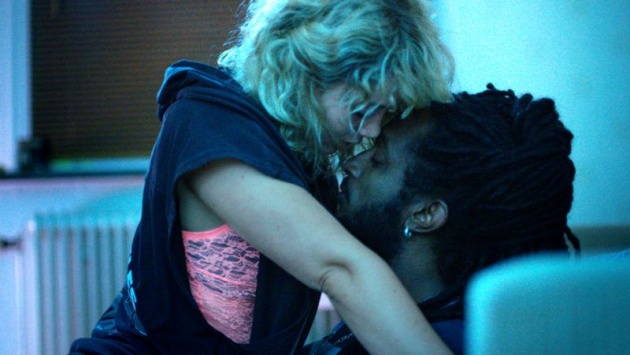 Pictured: 'Can men and women be friends without sex - oh, forget it!' Mika (Fanni Metelius) and Tesfay (Ahmed Berhan) go to the next level in 'The Heart', a dramatic film in Swedish written, directed and edited by Fanni Metelius. Still courtesy of M-Appeal

One noteworthy scene occurs early in their relationship when Mika sleeps with another guy but then tells Tesfay about it in order to confirm that she is serious about him. ‘Wow, you are the only woman I know who would do that,’ Tesfay says in a state of underwritten stupefaction. I am sure that the normal end to this scene is an explosion of anger, of ‘how could you do that?’ Tesfay is chilled – so chilled, he is practically in need of defrosting.

The one scene in the movie I absolutely hated features Tesfay explaining how he always ruins things in his life (‘I have a reverse Midas touch – everything turns to shit’). Up until this point, we have not observed this quality in Tesfay. He is cool. He promotes artists with talented voices – well, one female artist, one voice. He doesn’t talk about his parents, siblings, friends, work colleagues, or that summer job he didn’t keep because he kept dropping crockery. Where does this sentiment come from? I came to the conclusion that Tesfay is a composite of many of the men Metelius has dated. The problem with composites is that the parts don’t fit together. You can’t stick one piece from one Ikea item of furniture into a piece belonging to another.

Worse, I didn’t feel that that Metelius understood what Tesfay – or indeed any man – is saying when he makes such a declaration. He wants affirmation, the ‘look at all the wonderful things you have done’ speech. Self-pity is the same as self-love, to paraphrase Hermann Hesse. The ‘everything I touch turns to poop’ speech is also an excuse for not having achieved very much. Tesfay has a girlfriend to earn money and keep him supplied with shoot ‘em ups. What is there to strive for?

Mika doesn’t give up on Tesfay, but she does not actively push him either. She takes photographs of a cigarette smouldering in an ashtray. I’m sure it is a metaphor. Later we see her intentionally blurred photographs of a man in action. Can’t be Tesfay then!

The film half-asks the question: what do young people want in a relationship? Company, warmth, unconditional love and a joined up future. Mika doesn’t talk about the future as this big thing involving work. She is just upset that Tesfay is keeping his fudge packet to himself.

Holiday - celebate, well not quite

When one relationship is failing, you always have your friends to turn to. Mika goes on holiday with her besties and slips. This is the one shocking moment in the film. Fortunately, she is all right.

There is an amusing scene when Mika entertains an English guy in her room and he generates his own lubricant. That’s messed up, a more street-wise lady might conclude. There is also a frankly weird moment when Mika is given a baby to look after. A child doesn’t turn over when offered an embrace. Mika enjoys being tactile in the baby’s company – not in an exploitative way, I might add. We sense this is what she wants from a boyfriend, the same sort of uncluttered intimacy. She might not be keen on the nappies, though.

Metelius made her film over a three year period, shooting then editing then shooting some more. The film arrives at a conclusion that, according to Metelius, hasn’t been seen in a movie before. I’m sure that’s not true, but I feel that Metelius has watched far too many Hollywood rom-coms rather than the edgy stuff from the fringes.

Metelius isn’t coy about showing herself semi then buck naked in the love making scenes. She wants us to know what Tesfay is missing, besides his parents, friends etc. On the early moments of their relationship, Metelius presents partially clothed sex, but later takes it to the next level. There is just enough nudity in the film for it not to seem gratuitous. Tesfay himself is tactfully photographed in the bedroom scenes.

For us to root for the couple, we have to share their affection for one another. However, they are unequal. Moreover Mika is a bit selfish: she should have taken Tesfay on holiday, not gone with her mates. Neither of them discusses social background or race, but these would have some impact on the confidence they have in one another. Ultimately, Tesfay is a blank. We can’t take everything he says at face value and we don’t understand why he doesn’t get offers from other women more pushy than Mika.

In her commitment to naturalism, Metelius forgets about plot and character. At a certain point, values should be revealed: in the poker game of life, people always show their hand. Not in Metelius’ film. The problem with young people’s cinema is that it can seem immature and unfocussed. The heart is a vital organ but then so is the bladder. 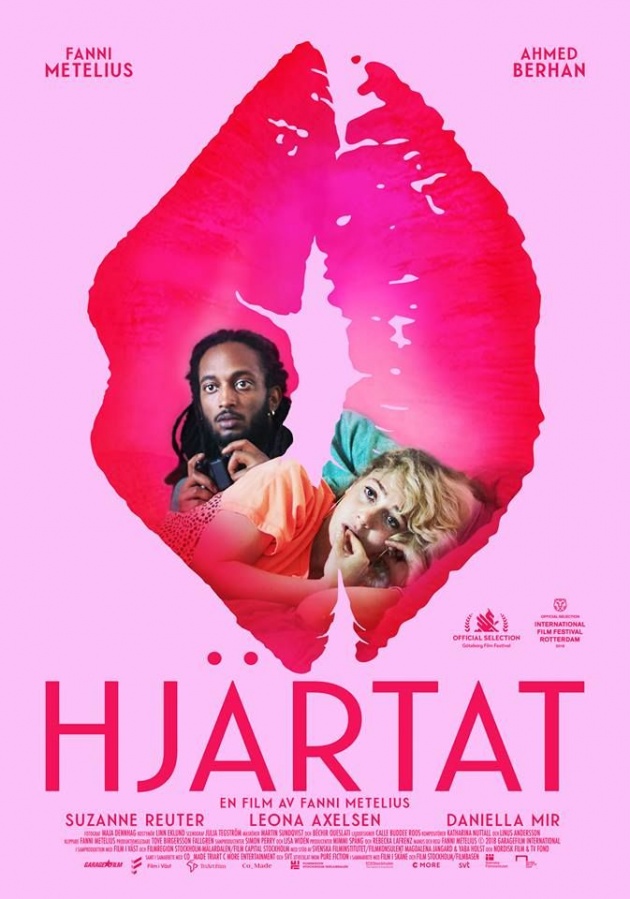