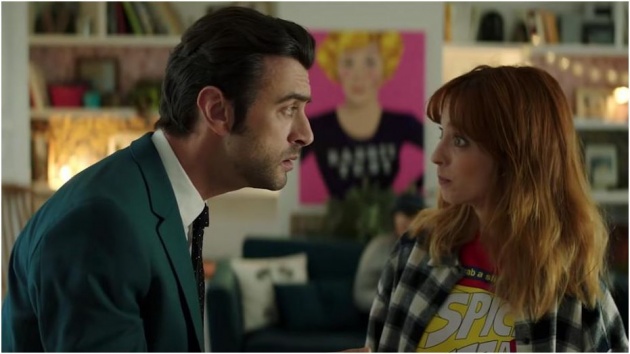 Pictured: Roberto (Javier Rey) schools stand-up comedian Isabel (Leticia Dolera) in the art of seduction in the comedy, 'Get Her... If You Can', directed by Inés de León. Still courtesy of A Contracorriente Films

It opened on 29 March 2019 on 235 screens, but if the website box office mojo is to be believed, director Inés de León’s feature debut, ¿Que te juegas? (Get her ... if you can) was pulled from Spanish cinemas after two weeks of release. The big Spanish language hit that replaced it, I Can Quit Whenever I Want, is a remake of an Italian comedy about three unemployed professors who develop a drug that helps them party all night. There is no accounting for popular taste.

De León’s film focuses on a wager between two brothers, Roberto and Fernando Allende-Salazar (Javier Rey and Daniel Pérez Prada) whose company is facing ruin. As CEO, their sister, Daniela (Amaia Salamanca) proposes lay-offs and downsizing. Roberto, who is something of a playboy, makes a counter proposal - a turbine that he has sketched that will transform the company’s prospects. Fernando, who hides in an office in army uniform, has given his sister his vote. Roberto bets his brother that he can find someone to fall in love with Daniela; if he wins, he gets Fernando’s vote. If he loses, Fernando keeps the drawing of the turbine. Roberto’s choice of suitor is unusual: Isabel (Leticia Dolera) an ‘underground’ stand-up comedian, who roasts Roberto at the company Christmas party but succeeds in making Isabel smile.

Pictured: Isabel (Leticia Dolera) roasts her future employer, Roberto (Javier Rey, not pictured) in the Spanish comedy, 'Get Her ... If You Can', directed by Inés de León. Still courtesy of A Contracorriente Films

The wager, a creaky plot device used to good effect in the Dan Aykroyd-Eddie Murphy comedy, Trading Places, is coupled with duplicity and a healthy dose of romantic comedy nous. Roberto hires Isabel for three weeks and offers her not money but the opportunity to appear on television and movies. For immersion into her role, he gives her a batch of romantic comedies to watch including Notting Hill dubbed into Spanish. Isabel, who tends bar at the club where she performs stand-up, doesn’t buy into the conventions of the romantic comedy, complaining that films always miss out the moment when Hugh Grant and Julia Roberts lie in separate beds and masturbate whilst thinking about each other. This doesn’t show much knowledge of the movie: Rhys Ifans’ Spike is very much an impediment to privacy. At any rate, how will Isabel meet Daniela? Surely, she won’t bump into her, spilling wine on her blouse. That’s exactly what she does after a trip to the opera in which Isabel doesn’t wear the dress that Roberto purchased for her and falls asleep.

Isabel loans Daniela her top to make it up to her, then visits her well-appointed house to return her freshly laundered item of clothing. Isabel has no intention of just handing it to the maid, and slips inside. When an interior decorator who Daniela detests comes to call, Isabel takes charge of the conversation, proposing to turn a room into a torture chamber complete with shackles. She successfully frightens the designer off, much to Daniela’s restrained pleasure.

Daniela is a fearsome woman who makes assistants quake in their shoes. One such assistant is fired for spilling a drink on important papers whilst handing them to her. Roberto is glad that Isabel has pierced his sister’s defences. But how can a seduction take place? Roberto explains that you can always tell if a woman is interested when you offer to show them around and take their hand. If the woman closes their fingers around yours, they will be compliant for that first kiss. Isabel decides to throw a party at her place; Daniela accepts the invitation. The atmosphere is dead, suggesting the slices of lettuce that have fallen out of a platter of sandwiches after every sandwich has been eaten; attend a working lunch and you’ll always see this. Roberto hires a DJ and a group of actors who beautify the place and name check award ceremonies whilst the two women dance. Daniela is slightly resistant to having her hand grasped. 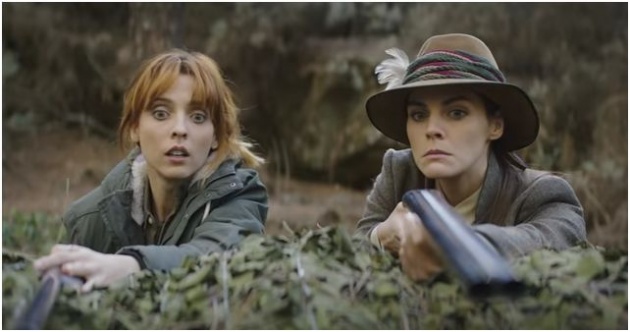 Pictured: 'This isn't Shotgun Safari.' Isabel (Leticia Dolera) is schooled in 'point and shoot' by Daniela (Amaia Salamanca) in the Spanish comedy 'Get Her ...If You Can', directed by Inés de León. Still courtesy of A Contracorriente Films

At a certain point, she becomes suspicious, having been told of Roberto’s machinations by a melancholic barman. She kidnaps Fernando to interrogate him and easily guesses the combination of his safe to find the diagram of the turbine. She invites Isabel on holiday, taking her hunting, though Isabel cannot bear to shoot a deer. A comical confrontation ensues as the two of them stand on a cliff edge in wing suits used for base jumping.

Roberto meanwhile is miserable. He has fallen in love with Isabel. In true romantic comedy fashion, matters are resolved, though not without some excessive misquoting from romantic comedies. For his deception, Fernando is ordered to the Middle East.

How could I forget Roberto’s comedy sidekick, the Holy Man that he brought back with him from the Andes? Well, I’d like to. There are only a certain number of stereotypes that you can put up with. He talks sense to Roberto, usually with a strained homily. The climax involves another kidnapping and an exchange of views in a remote location. Mescalin may also be involved.

Pictured: Put it hair! Roberto (Javier Rey) with his Holy Man in the Spanish comedy 'Get Her ... If You Can', directed by Inés de León. Still courtesy of A Contracorriente Films

The sequence over the end credits is moderately amusing as Isabel roasts us, the audience: ‘you want to read? Get a book by Paulo Coelho.’ Isabel’s tee-shirts, mostly in English, deserve special mention, including one that reads ‘perfect delivery’. Outside of Spain, it is hard to imagine the film getting much of a release outside the festival circuit. Beyond the films of Pedro Almodovar and possibly Alex de la Iglesia, only Spanish dramas and thrillers succeed internationally. Daniel Monzón’s prison thriller Cell 211 (2009) is particularly recommended. Still debutante de León, working from a script by Astrid Gil-Casares, Pablo Alén, Breixo Corral and Rafa Russo, offers some modest chuckles. It is pleasing to note that the Spanish stand-up scene is much like the American one. Dungarees are a must-wear. 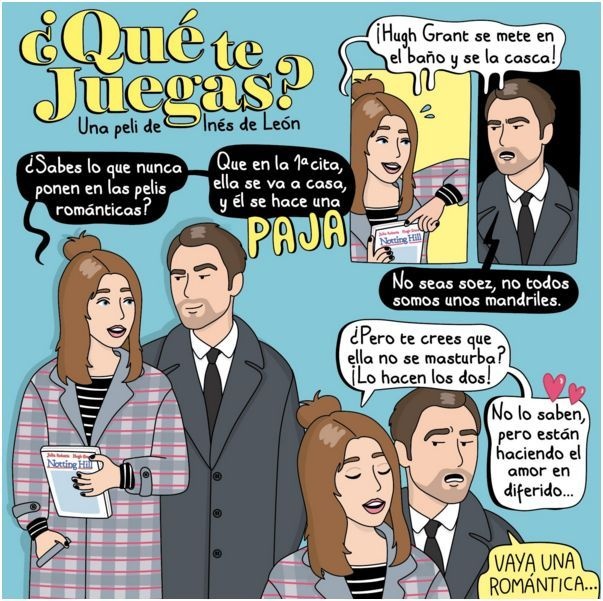 Pictured: The imagination advertisement campaign for '¿Que te juegas?' (Get Her ... If You Can) from director Inés de León. Courtesy of A Contracorriente Films