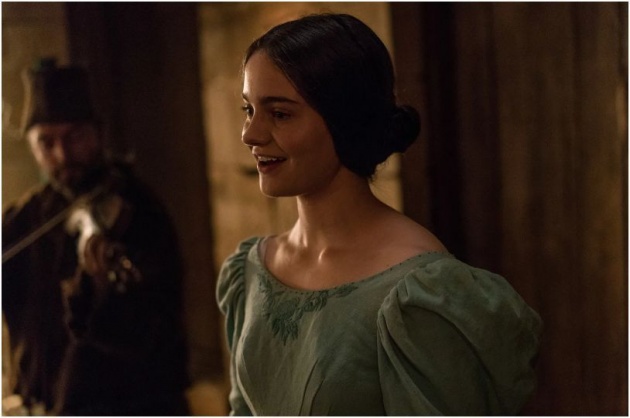 Pictured: 'I wish, I wish - I wish I had my letter of recommendation!' Clare (Aisling Franciosi) performs in a typically tense scene in writer-director Jennifer Kent's 1825 Tasmanian revenge drama, 'The Nightingale'. Still courtesy of IFC Films / Screen Australia

When a film director has a success in one genre, there is pressure to stick to it. For her second feature, Australian writer-director Jennifer Kent has audaciously and successfully followed her 2014 horror film, The Babadook with The Nightingale, a colonial era rape, murder and revenge drama in which two very different oppressed individuals are joined on a quest that will lead either to retribution or their own certain deaths.

Set in the 1820s Tasmania (known then as Van Diemen’s Land), a small island the size of Denmark, it charts the injustice meted on Irish convict, Clare (Aisling Franciosi), the nightingale of the title, on account of her singing voice. She is the employ of Hawkins (Sam Claflin), an ambitious but under-rewarded army lieutenant, who is seeking a recommendation for a captaincy. Clare has served her time and needs a letter of recommendation to be declared a free woman. However, Hawkins thinks of Clare as his property, compensation for a joyless, unmarried life and three years in the bush where only one was promised. Although Clare is married to Aidan (Michael Sheasby) and has a baby daughter, he pleasures himself with her after a performance for a visiting officer (Ewen Leslie), leaving scratch marks about her neck. Aidan demands the letter, is refused and gets drunk. That night, he confronts Hawkins and embarrasses him. The visiting officer won’t recommend him, forcing Hawkins to travel north with two junior officers, the coarse but cowardly Ruse (Damon Herriman) and young Jago (Harry Weaving-Greenwood, son of the actor Hugo Weaving) who has only been in Van Diemen’s Land for two months, to plead his case in person. Before the evening is out, the three men pay a visit to Aidan and Clare’s hut. Clare is raped twice, Aidan is shot dead and the baby is fatally silenced having been thrown by Jago against the hut wall. To ‘finish it off’, Clare is stunned with a rifle butt to her head. She awakens to the next day to a scene of carnage, which haunts her dreams throughout the ensuring drama.

The Nightingale is not, to be sure, a pleasant watch, but it has a clear purpose: to depict the unremitting failure of England’s attempt to tame the Australian bush by subjugating ‘the black fellas’, the Aboriginals who cleared the land in their own way and were forced out by sheep farmers who knew nothing of the traditions that preceded it. Clare teams up with Billy (Baykali Ganambarr) her reluctant guide to intercept Hawkins before he reaches Launceston, a town five days trek away. Billy does not believe anything the white devils tell him – and with good reason – but is an accomplished guide. His ‘uncle’ Charlie (Charlie Jampijimpa Brown) is leading Hawkins and his group – men pushing the wagon include two silent older men and a self-reliant orphan, Eddie (Charlie Shotwell) who Hawkins takes under his wing, if only as a criticism of Ruse and Jago; he offers to teach the boy to read and to fire a pistol, and congratulates him at one point for saving a barrel of rum. 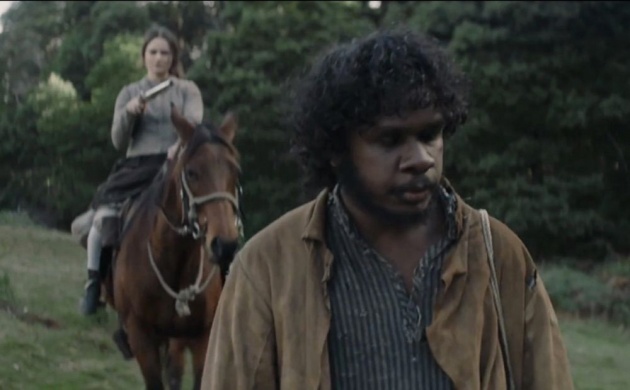 Pictured: 'Why can't I take my dogs?'' Billy (Baykali Ganambarr) leads Clare (Aisling Franciosi) into the bush in the revenge drama, 'The Nightingale', written and directed by Jennifer Kent. Still courtesy of IFC Films (US) / Transmission Films (Australia) / Screen Australia

Whenever Clare comes across white fellas, Billy is nowhere to be seen. ‘You’re supposed to protect me,’ she complains. ‘No, I’m supposed to guide you, he replies, ‘can’t do that if I’m dead!’ Clare initially refers to him as boy and points a rifle at him. However, after losing their food after an encounter with a slaver, Clare appreciates his worth. She goes against his advice in trying to cross a raging river. Having first led the horse to shore, Billy saves her with an outstretched stick.

There is no sentimentality in Kent’s approach, but there is a grudging appreciation of the other, notably when Clare exclaims that she hates the English as much as Billy and lapses into Gaelic. Hawkins has no truck with remorse. It is easier for him to shoot than to listen to pleading voices. Claflin doesn’t play him as a caricature. Hawkins has his own sense of grievance and generally feels that what happens in country stays there. Clare will later tell him that she is a ghost, but Hawkins is the real ghost of a human being here, dehumanised by army service.

Both Charlie and Billy have their own agendas. For Billy, he wants to be reunited with his people – he makes an unpleasant discovery. Charlie wants to confront Hawkins with his own ambition – for it to mock the lieutenant. 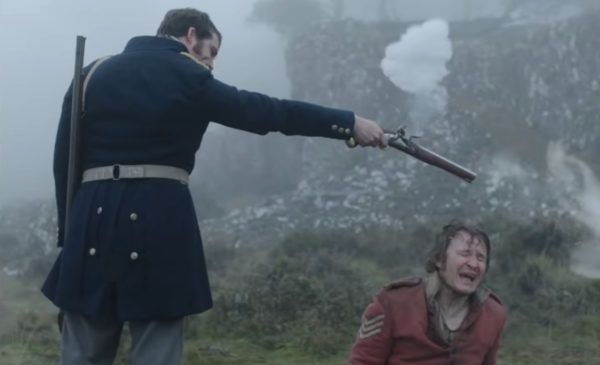 Before she sets on her quest, Clare is told ‘there’s a war on’. This is viewed in semi coherent sequences: a thatched building that is set alight and watched by a young woman and her children; a house where two white people are killed in their beds. When men are doing their jobs – and women too – they exercise no compassion. As couples, they offer the vestige of decency. A couple pass Clare on the street and almost take pity on her, until she laughs deliriously. Another couple offer her a ride and make a gesture to Billy that releases his emotion – but (again) not in a sentimental way.

Kent has not fully abandoned the language of the horror movie. Knocked unconscious, she thinks of herself and Aidan dancing in black space. At another moment, she sees Hawkins’ face. At another, Aidan tells her that he and their baby are all right, but utters the same words over and over. A stranger appears in the dark and appears to be another figment of her imagination – until Billy whacks him over the head.

At least one reviewer has complained that the ending is unnecessarily drawn out. However, Kent stresses that the journey is as much Billy’s as Clare’s. He calls himself Mangana – the blackbird – and at one point appears to have turned into a bird to lead Clare out of the bush; this, as much as her own shock, causes her to laugh uncontrollably. For me, the ending is as it should be, Clare first confronting Hawkins with her voice before Billy sets out to rid the world of two bad spirits.

Billy tells Clare to head for the river. She ends up at the beach watching the rising sun. I wasn’t entirely sure what to make of the ending. Could a person really have travelled so far so quickly? It is almost dream like, but symbolically it is the first time the screen is filled with natural light – throughout the rest of the drama, overgrowth blocks out the sun. The film is shot in an ‘Academy’ aspect ratio (narrow screen, almost only slightly wider than it is tall) to represent Clare and Billy’s oppressed state. It also uses music sparingly. Mostly it is in the form of songs, either in English or Gaelic, with some songs in a reconstructed aboriginal language, palawa kani, written by Ganambarr. 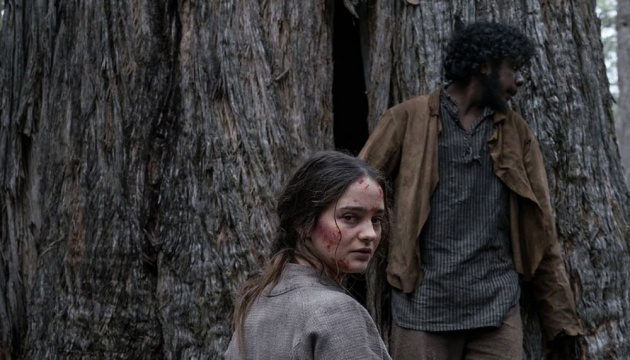