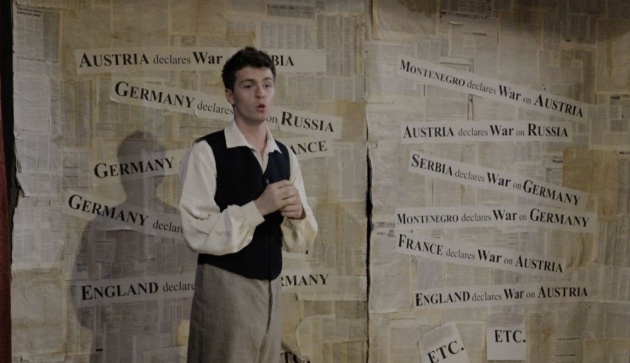 Not many writer-directors have their own film studio. Christine Edzard does. Since 1979, at fluctuating intervals, she has been making her own movies – mostly features, but also a 37-minute short, The Nutcracker, for IMAX – in a studio close to the River Thames, in Rotherhithe, South London, under the banner Sands Films. Edzard was born to German and Polish parents in Paris in 1945, pursued a career in the theatre and moved from production design to screenwriting (Tales of Beatrix Potter in 1971) to directing (Stories from a Flying Trunk). Her best-known film is a six-hour adaptation of Little Dorrit, with a cast that included Alec Guinness, Derek Jacobi and Roshan Seth – it was released in cinemas in two parts. Hollywood did come calling – Sands Films provided costumes for Steven Spielberg’s 1997 anti-slavery film, Amistad.

When you step through the door of 82 Saint Marychurch Street, Rotherhithe, the first people you see are Edzard, now aged 74, and a colleague. You will be offered a cup of tea. There are leaflets on a long bench inviting you to protest to prevent military action against Iran. Screenings in the downstairs cinema are held on a ‘pay what you can’ basis. What you notice above all are the drawers filled with artwork and research documents. At the end of a screening, you will be asked, ‘did you like it?’

The Good Soldier Schwejk adapted from Jaroslav Hašek’s incomplete stories about the blackly comic misadventures of an unlikely military recruit during the First World War (1914-18) is Edzard’s first film for seventeen years. She and her production partner, Olivier Stockman, do not intend to release it conventionally. Instead, they want to take it to theatre spaces across the United Kingdom – and perhaps the world. It is a recording of a theatre production, with frequent cutaways to the audience – at least one character is located there – that frequently steps out of its own frame of reference. One minute, Schwejk (Alfie Stewart) talks about Bohemia – what we now call the Czech Republic. The next, he refers to Weapons of Mass Destruction and the (alas still current) refugee crisis.

The film is made from a pacifist, liberal standpoint with Schwejk our over-talkative guide amongst the chaos of military preparation. Throughout, he is oblivious to the danger in which he finds himself. He is frequently referred to as an idiot. Perhaps nowadays we might call him autistic, given his inability to read other’s emotions, to chatter incessantly and to display disinterested insight.

One scene illustrates Schwejk’s ‘idiocy’. He and quartermaster Sergeant Vanek (Michael Mears) are despatched to locate a billet for their battalion after their train has shunted to a halt. Vanek heads left, where he is sure that there is a town. Schwejk heads right towards a field of flowers. He too is sure that he will discover a billet. However, his path is more inviting. We next see Vanek relating the story to two other soldiers. Vanek indeed found a billet quickly and established sleeping quarters for the men. Schwejk went missing for five days. He returns wearing a Russian soldier’s overcoat, extolling its virtue. It did result in him being mistaken for a Russian. Schwejk spends much of the film being mistaken for a spy, a deserter or a malingerer. In fact, he is just a certified idiot, unable to prevent the theft of his superior officer’s suitcase, which contains a mirror taken from their lodgings. Schwejk explains that they will easily be able to steal another one to return to their landlord. He does not think about the time experienced by their former landlord without a mirror and the inconvenience to other guests. 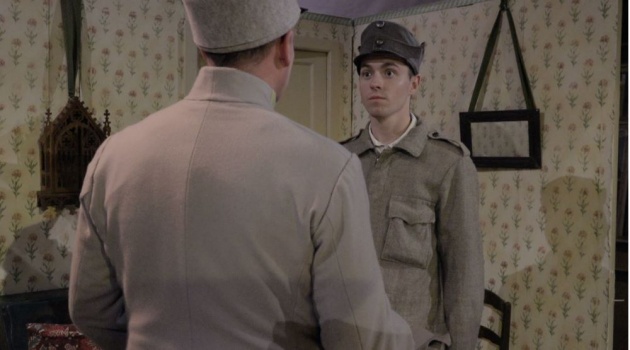 Stewart delivers his lines in an explanatory manner, without ever suggesting emotional depth. He is driven by logic. When Schwejk’s superior officer requires a dog for companionship, Schwejk steals one. However, the dog belongs to a General who takes it back. Did Schwejk know it was stolen? Yes, he was responsible. Did he know its owner? Yes. Schwejk judged his officer’s need was greater than that of the General. He did not think of repercussions, that the theft would reflect badly on the officer. Schwejk has no concept that he might offend people. When he sees a poster in which one soldier points a bayonet at the surrendering enemy, Schwejk complains that the poster is stupid, because there is simply no need to position a bayonet point so close to a man who is giving up. There are rules of engagement to obey. Schwejk’s babbling suggests a criticism of the army itself, which in turn gets him in trouble, missing a train, being separated from his papers and being forced (at least initially) to walk to the front.

In the film’s opening (after the audience take their seats), Schwejk is shown on stage suspended in the air with a cloud wrapped around his waist like a mini skirt. He wants to begin at the end because, he argues, stories make better sense when told backwards. He is quickly disabused of this idea by a woman who tells him that Archduke Franz Ferdinand, heir apparent to the Austro-Hungarian Empire, was assassinated [together with his wife Sophie] in Sarajevo on 28 June 1914, an event which precipitated the start of World War One. As Schwejk describes what he thinks will happen next, the woman is horrified. Schwejk too is confused. He pulls two panels across the stage to explain what happens next. ‘Austria declares war on Serbia’. ‘Germany declares war on Russia’ and so on. Schwejk doesn’t explain the context for each action. Instead, we are invited to consider that war only exists because vested interests prefer it that way. Grievance is overstated.

Why have an ‘idiot’ or an autistic man at the centre of an anti-war comedy? Because he is never complicit in the actions of the warring factions. Schwejk knows he will die. He follows orders to the best of his interpretation. He has no ambition nor any boundaries. In a lengthy sequence towards the end of the film, Schwejk moves between two railway carriages, one with his fellow soldiers, the other with his superior. ‘You said I am to check on you at regular intervals,’ Schwejk explains to his officer, oblivious to the fact that his visits are rather too regular. The carriages are ingeniously designed on stage – Edzard knows her stuff – our view abruptly shifting from one carriage to another. There is an officer who stands up and eats chocolate. Schwejk and his fellow soldiers discuss goulash and potatoes as well as the 11th battalion’s kitchen being left behind – now they will have to share with the 12th battalion, a prospect they do not relish. The sequence disrupts the pace of the film, but for good reason: we don’t know it but Schwejk is heading for his death.

There is an interesting scene in a heavenly waiting area – it isn’t purgatory because sin isn’t discussed. Schwejk is told by a dead officer whose stars on his chest now form a halo above his head that he must return to Earth. Earth needs ‘idiots’ to tell people that war is wrong. I understand Edzard’s intention: to show Schwejk as the immortal messenger, forever demonstrating (through theatrical revival) the folly of war. He is a selfless disrupter, an irritant with information overload – he even mentions the internet. He also has no sense of time, his time or anyone else’s.

In the front row of the audience, there is a representative from an arms company, who states that they do their best business in peacetime, selling to both sides. Using Hašek’s text as a starting point, Edzard criticises our acceptance of the arms industry as a necessary business. If she wanted to make a hard-hitting point about weapons proliferation – and others have done this – she might have chosen a different text. Bertolt Brecht’s Mother Courage and her Children springs to mind.

Edzard’s film, especially the production design and Alfie Stewart’s unblinking central performance, is aesthetically pleasurable. Also noteworthy is the musical quartet – Junchi Deng on accordion, Hannah Morgan on clarinet, Brendan Musk on trumpet and Fred Thomas on percussion – who we see from time to time performing Mozart as arranged by Michel Sanvoisin. By the end of the film, an American (Medea Benjamin) wearing a 'troops home'  t-shirt jumps on stage next to Schwejk, trying to work the audience into rejecting war. It comes across as a naïve gesture, preaching to the converted. The way to change minds is to promise them one thing, then give them another. In history, we may be too late to change events. We cannot un-invent nuclear weapons. In fiction, we can engage an audience with generic conventions that appear to offer a morally certain, ‘feelgood’ narrative, then subvert expectations. We need less didacticism and more surrealism.

In Edzard’s film, we get absurd humour, in which an ostrich egg is likened to a weapon of mass destruction and a scene in which Schwejk scuppers a ciphering system by leaving behind the second volume of a book necessary for decoding messages – the officers are only travelling with the first volume, completely useless. Sometimes the point of the satire is lost. The joke is that the ciphering system is too complicated to be effective. Then it is described as derivative – not original in the slightest. Schwejk makes it non-functioning. It is as if Hašek/Edzard were saying ‘no codified secret communication system will ever be effective’. I don’t believe this, since narrative films rely on codified communication – movie conventions. I wonder if some judicious reviewing of Hašek’s satire is in order. 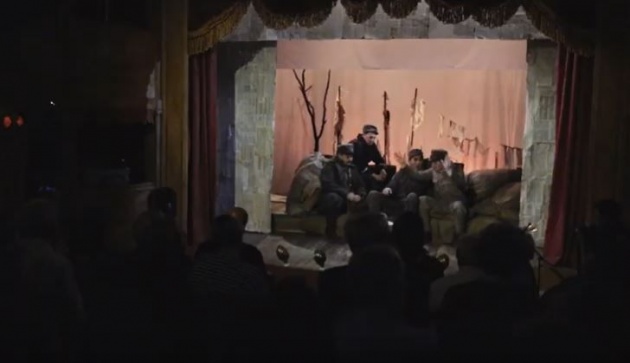