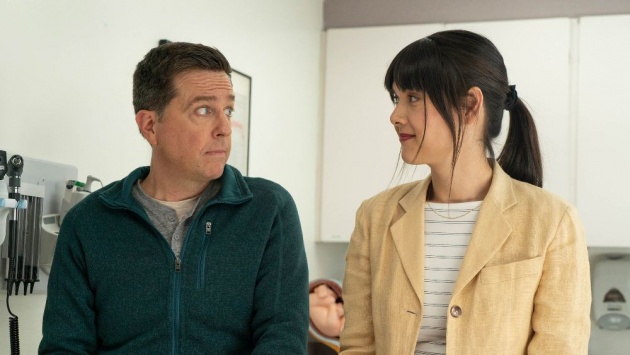 Pictured: 'Meet-cute baby', eventually. Matt (Ed Helms) and gestational surrogate Anna (Patti Harrison) in a scene from the pregnancy relationship-comedy, 'Together Together', written and directed by Nikole Beckwith. Still courtesy of Sundance Institute

Together Together, written and directed by Nikole Beckwith (Stockholm, Pennsylvania), has the sweetness and warmth of the best romantic comedies whilst flipping the conventions of the genre. It charts the relationship between forty-five-year-old San Francisco-based app developer, Matt (Ed Helms) and his twenty-six-year-old gestational surrogate, Anna (Patti Harrison). As far as I can tell, Matt doesn’t work but instead devotes his days to impending fatherhood, firstly by selecting the surrogate then by spending as much time with her as their boundaries will allow, even objecting to her one-night stand, Jacob (Timm Sharp) who flips him the ‘V’ sign. ‘His penis has been near to my baby,’ Matt protests as he stops by Anna’s apartment to present her at the second attempt a pair of clogs to protect her feet, one of a few inappropriate ideas that die on the vine. ‘You do know that your baby isn’t in my vagina,’ responds Anna, who has cashed her $15,000 cheque for the purpose of going to college. Matt knows, but he has difficulty with the word, ‘vagina’.

Beckwith does an unusual thing, rarely giving either Matt or Anna scenes on their own. Almost every scene features them both. You can’t want a couple to get together at the end of a romantic comedy in quite the same way if they are always seen in one another’s company. Rather the film makes the point as to why they can’t become a couple. We watch them, a generation apart, argue and share moments, with Matt introducing Anna to ‘The Godfather’ of sitcoms, Friends. ‘It’s not like ‘The Godfather’, he adds as a qualifier. Anna endures a season and protests. ‘This is really stupid.’ She has a point.

The humour doesn’t jump out at you – it leaks as if from a biro, only you don’t blame it for soiling your shirt pocket. The film begins with ‘the interview’, Matt asking Anna if she has stolen anything. ‘Pens,’ she confesses, ‘I’ve stolen pens.’ ‘What’s the worst thing you have ever done?’ he asks. ‘That’s secret.’ Matt is looking for an experienced mother, but Anna doesn’t fit the bill. She was pregnant as a teenager and gave the child away. Having carried a child before, ‘I’m qualified,’ she insists, before bringing out her list of questions – ‘I’ve written them down. [Pause] What’s the worst thing you’ve ever done?’

No sooner are they introduced than we discover that the fertilization process within Anna is successful at the third attempt. Matt’s sperm and a donor egg known only by a five-figure number (working for scale, no doubt) have formed an embryo. Having brought with him an over-sized teddy bear that looks like it could menace a metropolis rather than comfort a child, Matt wants to toast the event, but Anna takes over. ‘It’s my toast,’ he insists. Anna recognises that the teddy bear isn’t for her. Matt keeps it. The city is saved.

In one of the rare scenes without Anna, Matt tries to toast impending fatherhood with his brother, Bryce (Evan Jonigkeit) while Bryce and his wife, Shayleen (Anna Konkle) are preoccupied with their two children. Matt can’t settle for the appropriate word and ends up with ‘to life’. ‘You’re going to have a cousin,’ he says to the children. ‘Have you told our parents yet?’ Cut to an outdoor brunch at which Matt is pouring sparkling champagne. ‘You travelled with an open container?’ complains his mother, Adele (Nora Dunn). His father Marty (Fred Melamed, in another genial performance to follow his turn in Shiva Baby) asks her to accept the news as something good.

Matt isn’t in a relationship. He was once – for eight years – but it didn’t work out. Anna isn’t in a relationship either, but as she puts it, ‘I’m only twenty-six’. They have awkward conversations, each not wanting to upset the other. Matt asks her if she is pro-choice. ‘Just because I had a child, doesn’t mean I’m not pro-choice.’ They go for a meal together and Matt makes a disapproving noise when she opts for potato over a salad, giving her the ‘you’ve got to be careful what you’re putting into your body’ speech. It’s not so much a speech more a desperate cry for relevance. Anna informs him that when he ordered carbonara with bacon, she didn’t make an annoying sound. ‘I only have to keep healthy for ten months. You have to keep healthy for eighteen years.’ ‘That’s a good point,’ Matt concedes.

The other unusual thing is that Matt isn’t always trying to win the argument. He can pause, moderate his views and give ground. This isn’t one of those romantic comedies where one partner rather than the other has all the smart lines that make you admire them. Both Matt and Anna are vulnerable.

Anna disapproves of Matt’s app, entitled ‘Loner’, which allows you to swipe through profiles and pick favourites but not confirm a rejection. Anna’s coffee shop colleague, Jules (Julio Torres) is more enthusiastic.  ‘It’s my second favourite app,’ he exclaims. He is dating two guys named Sam, so he doesn’t get their names confused. When Matt comes in with the set of clogs (first attempt), Jules is horrified. ‘I’ll exchange them,’ Matt says quickly. ‘Can I do that here?’

Anna doesn’t want to tell anyone that she is pregnant – not even Jules, though he figures it out. ‘Don’t call him Jesse,’ he tells Matt. ‘Why?’ ‘I know a Jesse. He doesn’t understand tumble dry low. Tumble. Dry. Low.’   Matt and Jesse engage in a staring contest, though it doesn’t last long. We sense that Jesse is fighting for ‘best friend’ status.

The film mixes medical visits and birthing classes. Matt becomes obsessed with bonding with the child, skin-on-skin, at the point of birth and before the umbilical cord is cut. But where should he rest his head? They frequently argue in front of staff, notably Jean (Sufe Bradshaw, a scene-stealer) who are professionally constrained to give their opinion but do so any way. The pair are caught in a maternity shop by a friend of Anna’s sister. Matt helps Anna explain that she works there – not very convincingly, but enough for some respite. Anna doesn’t want her sister to know she is pregnant again. This will confirm her family’s opinion of her. ‘You are making families,’ Matt counters. Anna is cheered by this.

The number of complications is minimal. Aside from a one-night stand, Anna doesn’t get involved with another partner. Matt doesn’t suddenly find someone either. They are goal-focussed – bring that baby to life. However, Matt cannot help but want to be around Anna - it’s that lack of a job. He involves her in discounting swatches (colours) for the baby’s nursery. Matt has read that room colours can have both positive and negative effects on the baby’s mood. They end up discounting 50 or so different coloured post-it notes until they get to a green. Matt explains its negative effect. Anna knocks the book from his hand.

In order to cope with handing the child over, Anna doesn’t want to know the baby’s sex. Matt reluctantly follows suit. ‘I could just blurt it out,’ he says, so doesn’t want to know. They want to refer to it in some way other than as a child. They decide on a genderless name: Lamp. Though of course this is the nickname of a former Premier League footballer, Frank Lampard. This doesn’t come up. 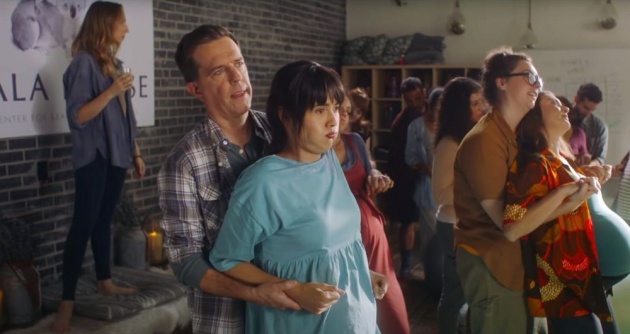 Pictured: Hold that thought. Matt (Ed Helms) assists Anna (Patti Harrison) in a scene from 'Together Together', a comedy written and directed by Nikole Beckwith. Still courtesy of Bleeker Street distribution

Beckwith uses the same font as Woody Allen in her title sequence and intertitles, which is just as well since I can’t imagine Allen using them ever again. There is a discussion on his movies (pre-Allen v. Farrow). However, Beckwith ends up on the right side of the argument condemning the sexual politics of Manhattan and Allen’s off-screen pursuit of Mariel Hemingway – another couple divided by a generation.

The film builds to a baby shower when we feel that Matt’s insistence on including Anna in every detail has gone too far. We feel her pain as Matt delightedly opens the gifts, as well as her awkwardness. ‘I’m the surrogate,’ is a conversation-stopper.

Anna and Matt are odd-ones-out in their classes too, though a lesbian partner does congratulate her for her courage. There is no mirroring of support. The men in Matt’s group cannot understand why he would consciously choose to be a single dad, even though women have made that choice for the last few decades.

With family defined as parent-offspring, two not three or more, the film builds to the delivery scene. By this time, Anna and Matt’s relationship has cooled. Anna has some great news and Matt responds favourably, ‘not in a dad way’ but supportively. These tender moments lift the movie from a box-ticking pregnancy comedy to a film about two people who adjust well to their awkward situation. The ending is abrupt, but Beckwith doesn’t offer a false promise.