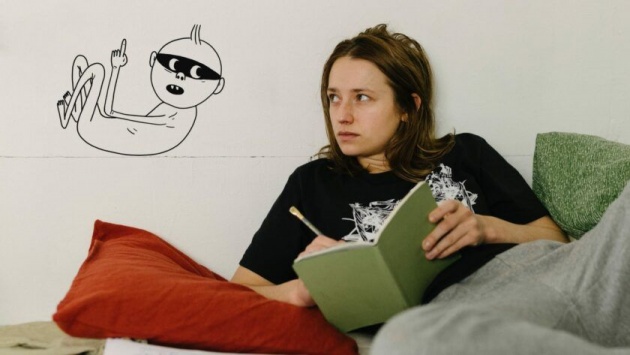 Pictured: 'Do you think I have a career in advertising? Because I could use the hamburgers.' Cartoon Ninjababy makes his feelings known in Norwegian director Yngvild Sve Flikke's gestational comedy, 'Ninjababy'. Still courtesy of Curzon Artificial Eye (UK)

How many women are surprised by a stealth pregnancy where they think they are less than eight weeks pregnant, but the baby is actually due in two and a half months? I ask because the plot of Norwegian co-writer-director Yngvild Sve Flikke’s comedy, Ninjababy, hinges on this point.

Encouraged by her flatmate to take a pregnancy test, unemployed party girl and occasional cartoonist Rakel (Kristine Kujath Thorp) discovers that she is with child. She assumes the father is martial arts instructor, Mos (Nader Khademi) with whom she had a one-night stand – sex doesn’t register as something especially memorable to her. When he asks her to have coffee with him, she reveals that she is expecting his offspring. Only, don’t worry, she has arranged an abortion. The next day, she misses her bus, so she calls Mos to drive her. At the clinic, she prepares for a termination only to be told that it isn’t legally possible – she is six and a half months pregnant. Realizing that he isn’t the father, Mos says his goodbyes.

‘This is like ‘Mamma Mia’’, observes her super-neat, organised flatmate Ingrid (Tora Christine Dietrichson), when Rakel explains it could be one of three men who fertilised her egg.

Up until this point, I was laughing with the movie: from the arresting opening in which Rakel and Ingrid’s flat is drawn on screen through some physical comedy in which one of Mos’s students decides to use a stick, having asked about doing so all lesson, to the bad news received at the abortion clinic. I then found myself switching off, which I am reliably informed is not the reaction of many other critics. This is because Rakel had accepted as normal not having a period for six months. ‘I don’t want a f-ing Ninja baby,’ she curses, but that’s what she appears to have. Moreover, the foetus, represented in cartoon form on screen, complete with a ninja mask, or looking like McDonald’s ham burglar, if you prefer (who remembers him?) starts talking to her.

At any rate, there only appears to be one candidate, the graphically named ‘Dick Jesus’ (Arthur Berning), who has a poster of Jesus holding a marijuana roll-up with the caption, ‘Blaze the Lord’, a joke Sve Flikke is so in love with that it is mentioned three times, as in ‘how can a man with a poster saying, ‘Blaze the Lord’ be a father?’ I am reliably informed that there is no ‘Dick Jesus’ in Mamma Mia, not even in student productions. At the end of their conversation, Dick proposes sex. Ninjababy is rendered as a three-dimensional model dreading sperm in the face. If that lights your candle, you’re welcome.

Rakel is absolutely determined to give Ninjababy up for adoption. For his part, Ninjababy wants Angelina Jolie for a mother. In an odd scene that comes out of nowhere, Rakel is sitting in front of a couple talking about her poor habits, obviously frightening them. Rakel is blasé, but is this an act to deliberately deter a couple that she does not like the look of?

Then, in another off-centre scene, Rakel decides to impersonate an adoptive parent-to-be to see what other would-be adoptive parents are like. The group chat quickly descends into an argument, before Rakel slips out as the real adoptive couple arrive.

Rakel’s sister, Mie (Silya Nymoen) appears to be the obvious choice for an adoptive parent, but she has the offer of work in the United States. Then Mos comes back into Rakel’s life, finally taking her for that coffee. He reveals himself to be a gaming nut, painting figures for a ‘Warhammer’ type game, which he takes incredibly seriously. That same day, he takes Rakel to a meeting and by the end, she and Mos are screaming (in English) ‘blood and suffering’, which is a metaphor for childbirth. 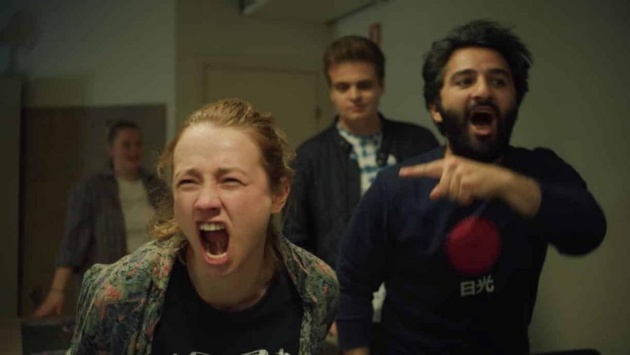 Pictured: Primal release for the next generation. Rakel (Kristine Kujath Thorp) and Mos (Nader Khademi) scream for all of Oslo in the Norwegian comedy, 'Ninjababy', co-written and directed by Yngvild Sve Flikke. Still courtesy of Curzon Artificial Eye (UK)

Then Dick Jesus returns. He accepts his parental responsibility. Rakel has three choices: to raise the child with Mos, persuade Mie to adopt him, or offer the child to its biological father. The plot, by screenwriters Johan Fasting, Inga Saetre and Sve Flikke, is an inverse Mamma Mia.

The disappointment of Ninjababy isn’t just down to the plot twist. There are surprisingly few comic complications into which Ninjababy himself can play a part. The kid doesn’t even remark that he looks like the McDonald’s ham burglar. All of the inventive stuff takes place before Ninjababy turns up. Moreover, the music is saccharine in the extreme, telling you – nudging you in the chest, in fact – to feel sorry for Rakel.

Moreover, a character makes a sacrifice for Rakel and she does not even register it. Sve Flikke is quite wilful in her insistence that Rakel shouldn’t grow as a person.

The resolution is at once moral and inevitable. Sve Flikke doesn’t compromise Rakel’s belief that she doesn’t want to be a mother. Some reviewers have commended the film for arguing that not all women have maternal instincts. I just wish there was something more to the film, a relationship with a bit more mileage in it than role-playing.

I did like Rakel’s suggestion for a name for the child, which is pretty close to Ninjababy. It is just that I expected the film to have something more to say about women who reject motherhood. Perhaps I’m being too demanding, just like a screaming infant.