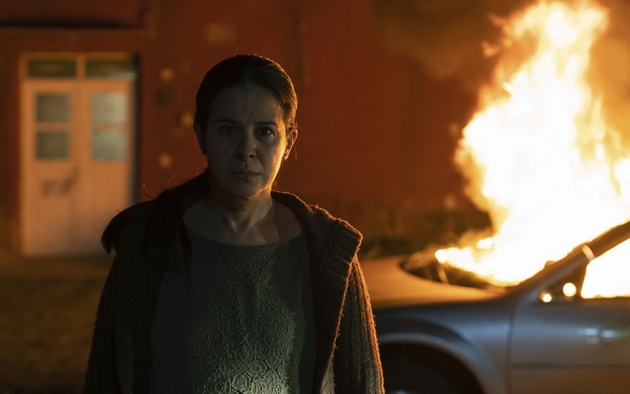 At the beginning of any film, you ask yourself, who is the protagonist? When there is a star involved, it can be obvious. In an independently produced film such as La Civil, co-written (with Habacuc Antonio De Rosario) and directed by the Romanian-born, Belgium-based Teodora Ana Mihai, you can’t immediately tell. A teenage girl, Laura (Denisse Azpilicueta) is applying make-up and scrolling through her phone, almost simultaneously – you know what teenagers are like. We hear the sound of messages popping up, one after the other. Her mother, Cielo (Arcelia Ramirez) is in the background.

‘Here’s a good one,’ Laura says, reading a social media post.  ‘Eve meets Adam. She says, ‘we have no clothes, no job, no shelter. How can we be in paradise? We must be in Mexico.’’

Cielo, who is busy making a cake, does not react. Laura takes time to apply lipstick to her mother’s face before leaving to meet her boyfriend, Lisandro (Manuel Villegas). Laura briefly mentions her father, who hasn’t been in touch and hasn’t sent money. There is nothing unusual about her departure.

Laura does not come home.

The next day Cielo is out driving when a car pulls up in front of her at a forty-five-degree angle. ‘You’re Laura’s mother, right?’ a young man asks. Cielo nods. ‘We have her.’ She is told to meet the young man in a café in ten minutes. Having placed an order of food, a highly anxious Cielo waits. Two young men walk in. One (Juan Daniel Garcia Treviño) does most of the talking. Taking Cielo’s plate of food to emphasise control and ordering drinks from the waitress, he asks for 150,000 pesos and her husband’s black pick-up truck. He specifies a drop off point before leaving. The man is full of cocky insolence. He enjoys Cielo’s pain. Being a member of a cartel – he refers to ‘dad’ – he’s protected. There is the usual caveat – no police.

It would be very short movie – and La Civil runs at two hours and twenty minutes – if Cielo and her estranged husband paid the ransom and got their daughter back. They can only raise 133,000 pesos, most of which is from Cielo’s estranged husband, Gustavo (Álvaro Guerrero), who lives with a young woman who seems to know how the system works. Of course, they have to pay. Gustavo can only raise the sum by selling stock. He is mistrustful and fuming. ‘How could you let her go out?’ He curses Lisandro for not meeting her. Handing over the keys to the truck and a brown envelope full of notes to the young man only to be told to wait at the cemetery while they check it – cocky arrogance present and correct – Cielo and Gustavo are left stranded. 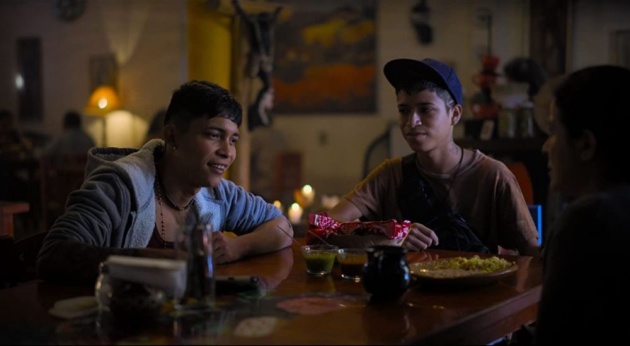 Laura is not returned. The kidnappers want another 50,000 pesos. They receive a loan from Don Quique (Eligio Meléndez) and hand over an additional sum. ‘I looked bad in front of dad that you did not pay the full amount,’ the kidnapper tells her. The loss of his insolence is short-lived. ‘I’ll take this as a gift.’ Once again, Laura is not returned.

No further demands are made. Cielo has little choice but to go to the police. We see a young woman at the counter reporting a sexual assault, who receives an unsympathetic hearing. Being ignored, Cielo opens an office door. ‘I’ve been waiting three hours,’ she tells an officer sitting down. ‘Some people wait longer. What do you want?’ After hearing her explanation and that it has been six days, the officer tells her that it is ‘complicated’. In short, the police can do little. At home, Cielo looks at the cake she made six days ago, now discoloured and rotten. She tips it into the bin.

Throughout, Mihai keeps her camera close to Cielo. Ramirez, who has had recurring roles in a number of Mexican television series, is in every scene. Other than the sketch of her family circumstances, we learn little about her. What we respond to is her resolve and her willingness to place herself in danger, in sharp contrast to her estranged husband’s fatalism.

When Cielo hears a news report that the bodies of two young women have been found, she heads to an undertaker’s office. When she enters – the building looks little different from a corner store from the outside – she calls out to a member of staff. There is no answer. Cielo proceeds down a corridor, hearing a repetitive thumping sound – helpful if you want to ratchet up tension. There are bodies everywhere lying on the floor. We can only imagine the smell. We see a woman working on a female body through a porthole-shaped window in a door. She is not pleased to see Cielo. ‘You are supposed to wait until you are called.’ ‘My daughter is missing,’ Cielo pleads. ‘I need to know.’ The two women were decapitated. Cielo is shown their heads – Mihai spares us nothing. Neither belongs to her daughter. The undertaker is weary but has a residual amount of compassion, not before telling Cielo that the police aren’t supposed to bring bodies to her, but they do. Cielo isn’t the undertaker’s only unwelcome visitor. The cartel visits her as well, collecting the bodies of their dead members and demanding the best coffins. ‘And who pays for them?’ she asks, implying herself.

This gives Cielo an idea. She stakes out the undertaker’s office in her car and waits for members of the cartel to arrive. The group includes two women. After a coffin is placed into the back of the cartel members’ truck, Cielo then follows them from a distance, though it never seems quite far enough. The women stop off at two convenience stores, both with heavily meshed windows. Cielo enters one of them, ostensibly to buy a bottle of water. She asks the female shopkeeper about the two women, explaining that her daughter has been kidnapped by the cartel. There is a ‘missing’ poster by the counter. The shopkeeper reveals that her son has been kidnapped as well. The two women represent a rival gang. She is required to pay them for protection. The leader of the group is Inez (Alessandra Goñi Bucio).

When Cielo finds herself in a traffic jam with a group of green military vehicles, she gets out of her car and talks to an officer. ‘You’re putting yourself in danger,’ Cielo is told. Given a card, she has a meeting with an officer, who tells her he can help her but essentially off the books. However, Cielo’s investigation hasn’t escaped the notice of the cartel, who make threatening phone calls and then fire shots at her house. Her car is set ablaze. No more stalking. The military turn up minutes later. Cielo is on a path of no return. 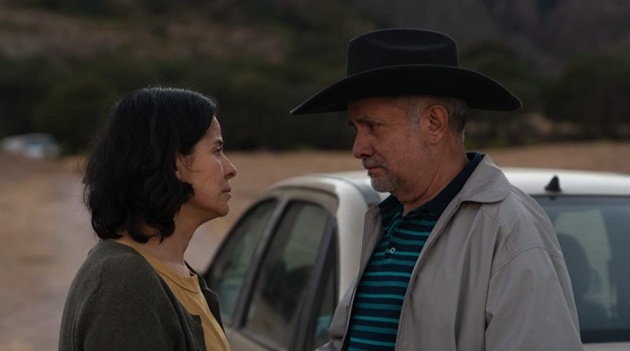 Why is Cielo herself not kidnapped and killed? She doesn’t go into hiding. Rather she stays in her bullet-hole ridden home with the charred remains of her car outside. One senses that it is easy to kidnap or attack someone in a busy street, where onlookers are inclined to look away than in a quiet neighbourhood, where residents peep through their windows (as happens here). The attack is intended to scare Cielo. Instead, it stiffens her resolve. She ends up participating in raids. At one point, we expect her to be given a bulletproof jacket. Instead she is asked to put on a black woollen balaclava.

Mihai originally conceived the film as a documentary about the woman who inspired Cielo. She chose a thriller format instead. She includes some documentary detail, for example, a discussion of the community’s dependence on the cartel. During a stakeout on a restaurant, her military contact tells her a story about broccoli. ‘I went into that restaurant once. I had a great meal. But it was odd. The starter was broccoli soup. The main was chicken with broccoli. Every dish had broccoli in it. Turns out that a lorry carrying a consignment of broccoli was held up in the mountains. Every restaurant was given broccoli. Similarly, when other lorries were held up, items were distributed to the community below. Eventually, lorries stopped taking that route.’

Cielo remains steadfast in her search. She witnesses harsh treatment of cartel members apprehended by the military. She is encouraged to hit one suspect herself in order to obtain information. The film doesn’t have a considerable number of twists. Rather Cielo discovers that her daughter’s boyfriend is in jail for possessing a gun – he joined a rival gang to find her – and that a respected neighbour has links to the cartel.

Mihai doesn’t show drug taking, sexual exploitation or explicit violence, except, in the case of the latter, violence committed by the militia. She shows the aftermath of the cartel’s cruelty. Scores of bodies and body parts, young people strung up, naked and lacerated. Cielo’s estranged husband, Gustavo moves back in with her. He helps dig up a site containing fifty bodies, including a rib.

The film climaxes with Cielo seeking answers from one of the kidnappers, known as El Puma. He is defiant to the last, refusing to yield information. In an epilogue, Cielo is sitting outside her home, having finally sent Gustavo packing – he could have raised the remainder of the 150,000 pesos but didn’t. It is a sunny day. She hears something, looks up and turns her head. There is a cut.

Mihai’s portrayal of life in an area where the cartel acts with impunity is bleak and unremitting. She doesn’t suggest any easy answers. What she provides instead is a damning indictment of law enforcement and Mexican male role models, men who allow their children little option but to drift into criminality. She presents Cielo – her name means ‘sky’ – as a counterpoint. Someone dogged enough to make a difference, though to no obvious benefit to herself. La Civil – the title refers to Cielo, the civilian – speaks to a desire to impose decency and respect for human life in a place where it barely exists, albeit at scarcely imaginable personal cost.