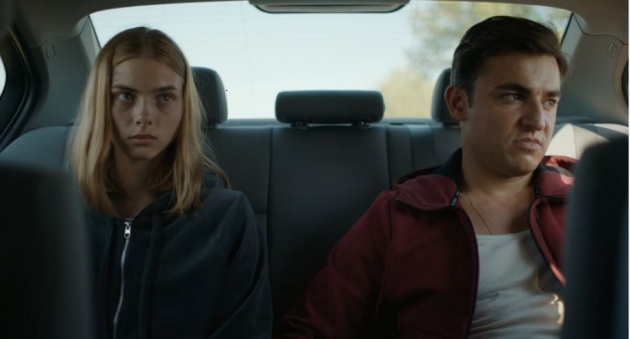 Written by National Film and Television School, Beaconsfield graduate Ingeborg Topsøe and directed by Jeanette Nørdahl, Wildland (original title Kød & Blod, meaning ‘Flesh and Blood’) is a gripping rural Danish drama about the corrupting ties of family. When her mother dies in a car crash, seventeen-year-old Ida (Sandra Guldberg Kampp) is taken in by her aunt, Bodil (Sidse Babett Knudsen). Bodil lives with two out of three of her adult sons, Jonas (Joachim Fjeldstrup) and Mads (Besir Zeciri) as well as Jonas’ wife, Marie (Sofie Torp) and Jonas and Marie’s baby daughter. She runs a bar, nice enough but hardly heaving with customers. She also lends money. In her house, the children are expected to collect, though Jonas prefers to sit in the car. When David (Elliott Crosset), the less than prodigal son, who has had a drug problem in the past, returns home with his sometime girlfriend, Anna (Carla Philip Røder), the debt collection business, which is never spoken about openly, is back to full strength. Bodil, who has a habit of grabbing the chins of her adult sons and bringing her face close to theirs, orders Ida to go with them. Ida is abruptly exposed to their working methods which lead to a debt collecting incident gone awry.

Opening with the aftermath of the accident – an upside-down car in the middle of a road, chassis dented, windows cracked – Nørdahl hints at violence but doesn’t always show it, so that a scene at the climax of the film is genuinely shocking. She borrows a technique from horror films, the sudden seizure of a man by an overpowering threat. We get a sense of the family’s criminality early on when Mads gives his mother and envelope full of cash and explains that he cut his knuckles on a window.  We get a sense too that David is unwilling to fully bring Anna into the family – he never refers to her as his girlfriend and sends her away before breakfast. Bodil expects her family to eat together, illustrated by a full table of breakfast items, a half-full jug of orange juice, bread, meat and so on. The clutter of the breakfast table, in sharp contrast to a clean, black dining table, tells a story - they only have half a life together. The boys inevitably troop down to their den, where they play shoot-em-up video games. Ida joins them too. During one shoot-em-up, Mads, the sexually immature one in the family – we can tell because he does not have facial hair – asks to see Ida’s breasts in exchange for showing her his penis. Ida refuses. Fortunately, Mads doesn’t insist. ‘Don’t tell mum’, he pleads. Ida continues with the game. Throughout the film, she is expected to hold a great many secrets.

Ida is a young woman in trauma with plaster over one arm. She would prefer to live on her own, as she does not know her aunt very well.  We understand that Ida’s mother kept her away from her sister, though she was no saint either, a former prostitute (like Bodil) who had problem with drugs. Bodil’s sons used to watch clients come and go – they brag about it. They have had a traumatic upbringing that they are reluctant to confront. There is one brief flashback of Ida’s mother, red-faced, bloated, best years in the rear-view mirror, before the crash. ‘Your mother loved you’, Ida is told but do we believe it?

During a late-night trip to the refrigerator in which she helps herself to a cold slice of pizza, Ida meets Anna, who shows Ida her tattoo just under her breast – ‘Carpe Diem’ (seize the day). Anna is genuinely sorry for Ida’s loss but is in her own rebellious phase; she doesn’t mention her own family.

Although Ida is shocked by her cousins’ violence, she parties with them. On the way back, they stop at a field and urinate together. The boys are surprised that Ida is comfortable doing so. She and David are left behind by Jonas and Mads, Jonas doing that ‘let’s drive away for a laugh’ thing of older siblings. David throws a rock at the car’s rear window. Jonas is furious, confronting David, until Ida breaks them up and they all get into the car. 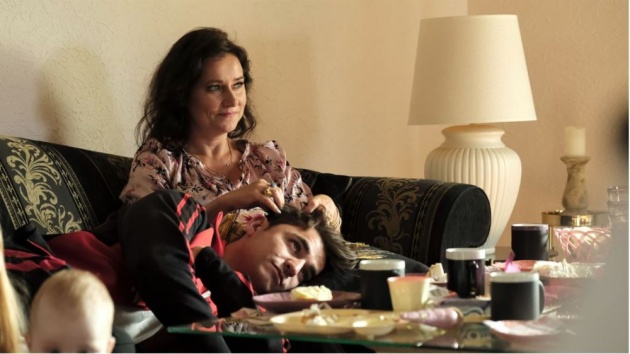 Jonas initially complains to her mother, ‘why do we have to take her [Ida] along?’ However, Ida proves useful. Most of the scenes are from Ida’s point of view, but one scene shows us a young girl leaving her classroom and the school – the girl is filmed from behind, so we don’t initially register that we are being introduced to a new character. This girl is Sofia (Frida Sejersen), the daughter of one of the family’s customers.  Jonas lures her into the car on the pretext of giving her a ride home; he knows Sofia’s father. On the drive, tinged with menace, he asks her if she likes school. Silence. ‘I hated school,’ Jonas says. ‘So did I,’ agrees Ida who is a welcoming presence for Sofia. ‘What do you like most about school?’ asks Jonas. Sofia answers, ‘I like history.’ ‘Why?’ ‘I don’t know.’ ‘Surely you must know,’ insists Jonas. ‘All those people,’ says Ida. ‘I imagine what it is like to be them.’ ‘All those names and dates – it’s hard to remember,’ says Jonas. The exchange tells you a lot about Jonas, how he intimidates with his honesty – I believe he hated school; they must have tormented him about his family. His line about names and dates – when questioned by police, I imagine that he is totally vague about details.  I believe that Ida would have hated her own school for similar reasons. At any rate, Jonas drops the child home, giving her a letter to give to her father. Ida is appalled. ‘When I talk to them [debtors], they don’t have the money,’ explains Jonas. ‘But when I talk to their children, they find it.’ Icily menacing, this is the standout scene of the movie.

Ida learns a secret from Anna – she is pregnant with David’s child. She visits the family as a guest but cannot tell them.  We get a hint when Anna takes Marie’s child from her and makes agreeable cooing sounds. The child is intensely charismatic as six-month-old babies can be, gumming a plate from the breakfast table during her introduction to Ida. Ida has no such way with children. ‘Take the plate from her, Ida,’ Bodil commands as the baby starts to cry.

In the aftermath of the event that goes awry, Ida runs away, back to her social worker. She wants him to remove her from aunt Bodil’s house but won’t say why. As the social worker goes off to make them both some coffee, Ida leaves the building. Ida lies to Bodil and the family about her whereabouts that night. ‘I will do anything for my family,’ Jonas explains, intimating that she should as well.

The tension in the household ratchets up. David tells Anna to leave, then disappears. Pressure is placed on Ida to talk. Jonas bursts in while she is having a bath. Ida tells him to go away, again and again, until he does so.  Jonas and Mads find Anna in a bar, as they try and locate their brother, suspecting him of being back on drugs. ‘He [David] called you a coward for always staying in the car,’ Anna tells Jonas. Jonas places his hands around her face and neck before throwing her to the ground. We worry about the unborn child. Jonas and Mads disappear, sending Ida home. Ida has received a slap from Bodil for good measure, though Bodil later apologises. 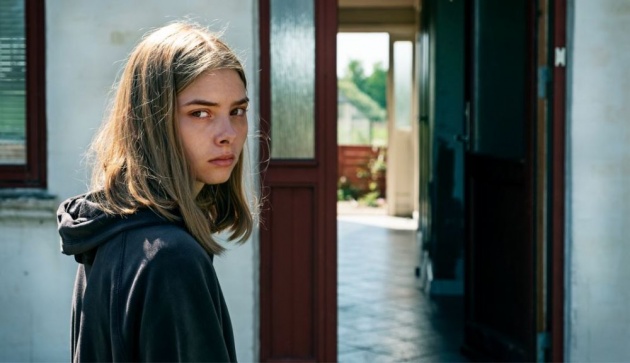 Pictured: Ida (Sandra Guldberg Kampp) at the point of no return in a scene from the Danish thriller, 'Wildland', written by Ingeborg Topsøe and directed by Jeanette Nørdahl. Photo: Chr. Geisnes. Still courtesy of BAC Films / Picturehouse Entertainment (UK)

The film builds to a point where Ida has to decide whether to betray her cousins and her aunt. Then the film skips a bit, showing us what happened six months later. This is an anti-dramatic gesture but is also rooted in truth. The agency of a seventeen-year-old girl in such a circumstance is fairly limited. Then there is an act of sudden violence and Anna goes into labour. The final scene takes place in hospital. ‘You’re hurting the baby,’ she is told. Anna grits her teeth. The baby is delivered. ‘Take it away from me,’ Anna cries, very decisively, recognising that she does not continue the cycle of corrupting families. It is a powerful ending, unsentimental, disturbing and guaranteed to bury itself into the viewer’s memory.

The film that Wildland most obviously resembles is the Australian thriller Animal Kingdom, written and directed by David Michôd, which also featured a domineering matriarch (a star-making turn by Jacki Weaver) and a seventeen-year-old ingenue, male rather than female. Michôd’s film was more visceral than Nørdahl’s; he had one eye on commercial appeal. Nørdahl and Topsøe are more interested in the corrosive powers of families left behind by the state. In spite of her profession, Bodil’s boys weren’t taken away from her, so she was allowed to mould them. Sidse Babett Knudsen’s performance is transfixing, but she does not dominate the film as Jacki Weaver did in Animal Kingdom. Bodil doesn’t have a scene where she explains herself and her choices. She is simply driven by a need to keep the family together, to shun outsiders, to keep calm and lend money (when available). The need for informal money lenders says something about the Danish state. Although Wildland is a dark family drama, it also has a political point to make about the need for a strong, compassionate state. I am writing this on Sunday 15 August 2021, the day that the Taliban is completing its violent takeover of Afghanistan, with the state capitulating and remaining western interests forced to flee, a reminder of what happens when the people don’t believe in the state and a violent wolf is at the door. An early image in Wildland of wind-farm rotor blades appearing to march across a countryside underlines the point about the advance of something sinister in a benevolent guise. 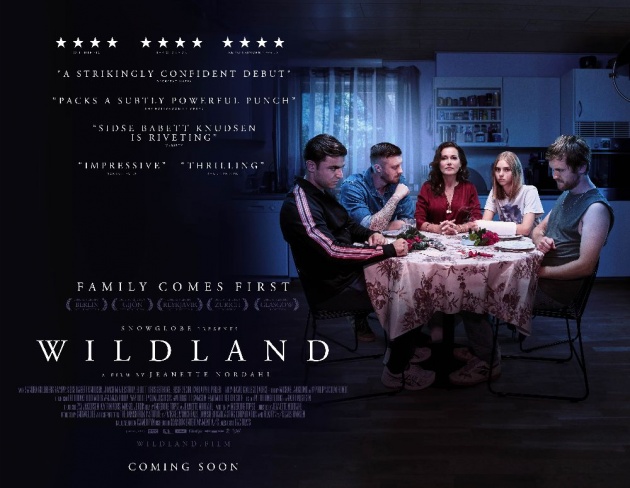