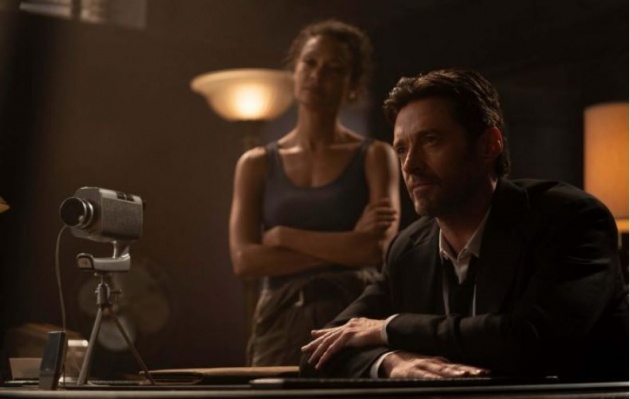 Pictured: 'How long does he throw a ball to that dog?' Watts (Thandiwe Newton) and Nick (Hugh Jackman) in a scene from the tech-noir mystery drama, 'Reminiscence', written and directed by Lisa Joy. Still courtesy of Warner Bros.

Reminiscence, the debut feature from writer-director Lisa Joy, the co-creator (with Jonathan Nolan) of the TV reboot of Westworld, is the latest big-budget film to flounder at the US box office in the wake of Covid-19. Warner Bros, its distributor, simultaneously released it in theatres and on HBO Max, its premier streaming service. Science-fantasy fans would undoubtedly have caught it through streaming, but few turned up to see it on the big screen. Quite apart from the high-concept – a submersion tank that enables you to feel your memories  and experience them again and again – the main draw is the reteaming of The Greatest Showman co-stars Hugh Jackman and Rebecca Ferguson. It turns out that Jackman is only a star when he has adamantine claws sticking out of his knuckles (as Logan aka The Wolverine) or singing and dancing as Phineas Taylor Barnum. As for Ferguson, she does her best Jessica Rabbit impression as a singer with a shady past but hasn’t yet found the role to transport her to A-list status.

Joy’s $65 million budget covers digital effects but doesn’t bring them quite to life. Her biggest imagining is the city of Miami several feet underwater following the effects of global warming. The days are too hot to endure. People only make a living at night. Having established this, Joy doesn’t use the idea to contribute to the plot. Instead, the concept is a pretext for an old-fashioned film noir, with Jackman (as ex-soldier Nick Bannister) playing a variation of a 1930s gumshoe, with a mouth for a cynical voiceover and an eye for a woman – Mae (Ferguson) – who pays good money to find her house keys, using Bannister’s memory-retriever.

The film is so old-fashioned that Nick has to lull his customers to sleep with his soothing tones like a stage hypnotist: ‘you’re going down a road you’ve travelled before’. He guides them to alight on just the thing they want to recall, for example, playing with their dog. Given the sensory nature of the experience, you’d think Nick would be pestered by a bunch of middle-aged men wanting to relive the loss of their virginity, but this is a PG-13 rated movie and besides Joy doesn’t exploit women. The process costs a fair coin – there are no dollar bills, it seems (they are likely to get lost in the water) – but Nick has a favourite customer whom he lets use the machine ‘on the house’, a veteran who had lost his legs in the war. Joy is clearly aiming for audiences of both Republican and Democrat persuasion. The Republicans will appreciate the reverence towards the armed forces; Democrats the concern about rising water levels.

The 1995 Kevin Costner picture, Waterworld did a much better job of depicting a post-climate catastrophe environment, with its characters’ desperate search for dry land. It also cost almost three times as much as Reminiscence (perhaps four times as much if adjusted for inflation) but everything about the film exploited its sea-bound setting. In the opening of Reminiscence, the camera glides between buildings towards a street that is seemingly protected from the water on which we first see Nick. There is some water on the sidewalk. Nick reaches down and picks up a playing card – the Queen of Hearts – handing it to an old guy in his chair. ‘You lost your queen,’ Nick tells him. The old guy barely registers his gratitude. ‘Care to find her again?’ he asks, indicating three cards on a table. Nick declines and heads into his office, a building with a large room in which stands his immersion tank. Customers are supposed to strip naked to use it, but this being a PG-13 rated film, black underwear is worn by the film’s stars.

Nick has a partner, Emily ‘Watts’ Sanders (Thandiwe Newton), the sort of steadfast woman who loves her boss only he doesn’t see her that way. You’ve seen that character a dozen times over, most recently in the television reboot of Perry Mason. Joy doesn’t subvert the stereotype exactly – how about the sidekick guy who isn’t seen by the woman he loves –  but she does give Newton a kick-ass action scene which she performs with aplomb. 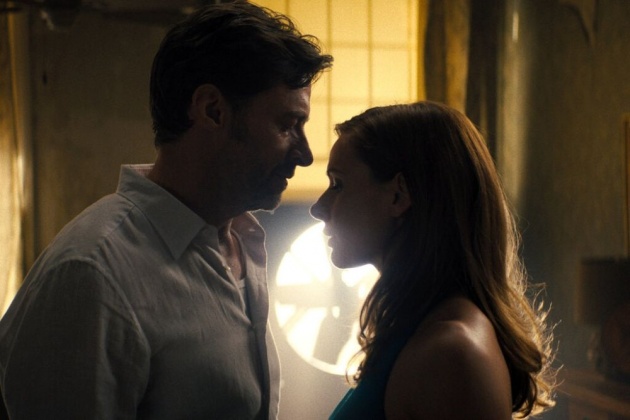 Pictured: 'It's sunny outside. What do you want to do?' Nick (Hugh Jackman) and Mae (Rebecca Ferguson) in a scene from the tech-noir drama 'Reminiscence', written and directed by Lisa Joy. Still courtesy of Warner Bros.

Both Nick and Watts are wounded souls – Watts is estranged from her daughter. Nick falls for Mae when he sees her a second time, returning an earring that she left behind. When Nick’s customers use the immersion tank, their memories are projected as a hologram so that Nick and Watts can watch. As we watch them, we can hear what happened in the past. However, I wasn’t sure that Nick and Watts could. The memories are also out-of-body experiences, so that the subject (as well as Nick and Watts) can see themselves as well as what they see. I found this hard to fathom, preferring the way that this was handled in Douglas Trumbell’s 1983 film Brainstorm, which gives us point of view shots. Kathryn Bigalow’s 1995 film, Strange Days, adopts a similar point-of-view approach. The problem with using point of view shots for scenes in which the characters participate is that you turn them into off-camera voiceovers. The audience has come to watch movie stars, damn it! Joy’s main influence is the pre-cog scenes from Steven Spielberg’s 2002 film, Minority Report, another futuristic noir drama, in which crimes are witnessed before they happen, and future criminals are arrested. The pre-cogs had their heads wired up and lay in water tanks, just like Nick’s customers. Minority Report is a lot more thrilling than Reminiscence but almost as corny.

Sucked in by Mae’s performance (at the Coconut Club) of ‘Where or When’, Nick escorts her home and listens to her getting real, slowly approaching him before they kiss. As they make love, the water purifier overruns. That’s one way of doing it. In true film noir style, Nick and Mae spend more time together. They climb a tower that overlooks the city. ‘Tell me a story with a happy ending,’ Mae asks as he embraces her, the couple staring at the watery horizon. ‘There are no happy endings,’ Nick replies glumly. ‘Then tell me a story with an unhappy ending but end it in the middle.’ Nick starts to tell her the story of Orpheus and Eurydice, which is also related in Celine Sciamma’s 2019 film Portrait of a Lady on Fire. Nick gets to the part where Eurydice dies, and Orpheus goes to the Underworld to retrieve her. However, he stops at the point where Orpheus can’t bear not to look at her, turns around and sends her back to the Underworld. Sciamma examined the cause of that moment, asking whether Eurydice called to him, willing the moment of her return to death.

At any rate, Mae disappears. Nick becomes distraught. He keeps getting thrown out of the Coconut Club by the doorman. How many times could he tell him ‘Mae ain’t here’? Nick had almost given up – and had taken plenty of dips in his immersion tank himself – until he finds himself assisting the police. A hoodlum whose memories Nick explores met Mae five years ago – she is in the background. Nick switches his memory prompts to getting the guy to recall all the times that he saw Mae, who was in an abusive relationship until the mobster Saint Joe (Daniel Wu) took an interest in her. Mae, it turns out, subsequently stole Saint Joe’s stock of the highly addictive bacca – Mae initially resisted tasting the product but eventually obliged – and then attempted a new life. Only a corrupt cop in Saint Joe’s payroll, Cyrus Boothe (Cliff Curtis) tracked her down. By this time, Mae had gotten rid of the bacca. Cyrus had another use for her. Nick discovers that he had been played. 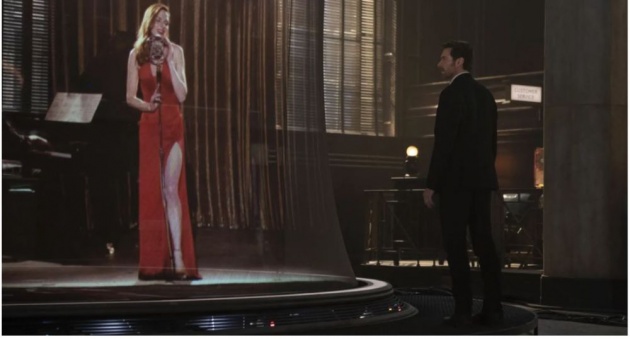 There isn’t a single plot twist that hasn’t featured in another movie. However, in Nick, Joy gives us a protagonist who isn’t the typical action hero who can overcome the odds. In a trip to New Orleans, he has to be rescued after having his head dunked in a tank full of face-chewing eels by the afore-mentioned kick-ass Watts. He similarly chases Cyrus over a hotel rooftop and almost has his manhood compromised by a ‘No Vacancy’ sign.  The plot involves a corrupt real estate baron Walter Sylvan (Brett Cullen), his living-in-the-past wife, Tamara (Marina De Tavira), who auditions men to play her husband, and their man-child, baby-faced son Sebastian (Mojean Aria), as well as a mistress and Sebastian’s young half-brother. There is also a point when Nick fires Watts.

In the film’s best moments, we are yanked out of the story when Nick ends an immersion session. We think the story is progressing in a linear way but Joy jolts us forward. The key scene, when Nick enters a memory and replaces the subject, Cyrus, almost achieves the poignancy that Joy was striving for. Mae is talking to Cyrus but says things that only make sense to Nick, who takes his place.

Fundamentally, Reminiscence doesn’t convince us that we have watched something new. It does prepare us for an unhappy, bitter-sweet ending in which the protagonist commits himself to his own form of punishment. I wasn’t actually convinced that Nick had committed a crime sufficiently serious to merit his fate. However, this is one of Joy’s tweaking of the genre. Meanwhile, the water that covers the roads in Miami doesn’t intrude on the characters. You can watch the film and wonder if we should really be concerned by the climate emergency. The answer is, of course we should.