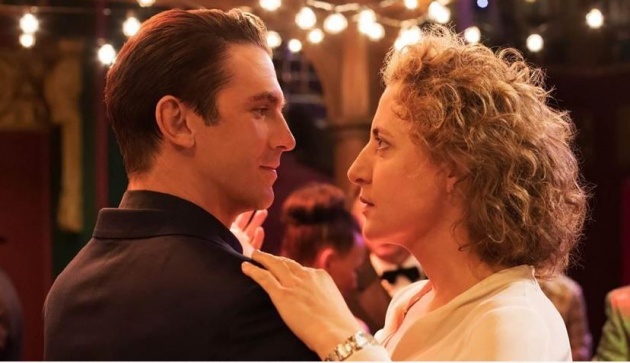 The oddball pairing of Maren Eggert and Dan Stevens – she from the indie, arty films of Angela Schanelec, he from Downton Abbey and The Guest – gives director Maria Schrader’s film, Ich Bin Dein Mensch (I’m Your Man) a lift. As Dr Alma Felser (rhymes with Alka Seltzer) she is frazzle-haired, uninterested in relationships, having failed at one, and utterly devoted to her work at the Pergamon Museum. As Tom, he resembles a high-functioning autistic person whose social skills are at best mechanical. That is because he’s a robot – artificial intelligence in human form, programmed to meet Alma’s preferences and to learn from his mistakes. But if Alma failed with another human being, can she really expect to find happiness with artificial intelligence?

Schrader and her co-writer Jan Schomberg have taken an idea from Emma Braslavsky’s novel, The Night was Pale, The Lights were Twinkling and turned it into a Making Mr Right-style romantic comedy. Braslavsky’s novel was set in 2060. The setting of Schrader’s film resembles the present day. In fact, in the film’s opening, we are thrown back to the 20th Century, as a band plays, ‘Puttin’ on The Ritz’. The choice of this song is not accidental; it featured in another comedy about an artificial being, Mel Brooks’ Young Frankenstein, as performed by ‘the creature’ (Peter Boyle) – ‘super ooper-ooper!’

Alma is introduced to Tom by an employee of the company (Sandra Hüller, last seen in Sibyl). She gives Alma the sales pitch. For his part Tom is happy to see her – he’s programmed that way. After recommending the Bordeaux, which he cannot enjoy himself, likening her eyes to two mountain lakes, which doesn’t impress Alma much, and performing mathematical calculations on demand, he summons her to the dance floor. Alma is incapable of giving in to the rumba, but Tom is adaptable, making his way towards her when she doesn’t move. His dancing requires her to make very little effort, until he breaks down with a refrain of ‘Ich bin, Ich bin’ and stagehands frantically remove him from the dance floor.

Alma didn’t sign up for a top-secret programme to trial a robot companion by choice. Her boss made it a condition of the continuation of her research grant. Whatever happened to ,,Die Zeit ist um’’  (Time’s Up)? She has problems with the only other man in her life, her father (Wolfgang Hübsch) who is reluctant to go for walks and eat soup. Alma is persistent but it doesn’t make for meaningful conversation.

Pictured: 'AI, AI, what do we have 'ere?' An employee of an AI company (Sandra Hüller) sets up a trial relationship with Tom (Dan Stevens), in director Maria Schrader's film, 'Ich Bin Dein Mensch' (I'm Your Man), inspired by the writing of Emma Braslavsky. Still courtesy of Curzon (UK) / Palace Films (Australia)

For the privilege of studying 2,000-year-old cuneiform texts in an effort to prove that their authors had a poetic sensibility, Alma invites Tom (with his little wheely suitcase) into her apartment, consigning him to the spare room. Tom admires the large painting in her lounge – a gift from her ex-lover, Julian (Hans Löw). Julian comes round to collect it and is surprised to meet Tom. For his part, Tom isn’t programmed to be jealous of Alma’s ex-lover and their shared history. Instead, he helps Julian take the painting down, calculating that Julian’s car has enough storage space for it. In response, Julian gives him a look as if to say, ‘how could you know?’ As man and robot walk to Julian’s car, carrying the large canvas, Alma watches them with something akin to amusement.

She is less amused by Tom’s attempt to be sexually desirable, posing in a bathroom filled with scarlet rose petals. ‘93% of women have this as their fantasy,’ he explains. ‘Guess which percent I belong to?’ retorts Alma. She is rather cruel to him – if one can be cruel to a machine – leaving him in a coffee shop all day. Given some money, which ordinarily he has no use for, he orders a coffee. He expresses a perverse joy in not wanting anything really. The barista for her part is indifferent. Nevertheless, that evening, Alma is sorry to discover Tom standing in the rain. She almost treats him like another human being.

When he and Julian met for the first time, Julian invited Tom and Alma to his housewarming party. This at least gives the film a destination. Before then there is a disquisition on ‘epic fail’ videos, which Tom is surprised that people find funny. People fall and hurt themselves and this is somehow amusing to others? This gives Schrader a potentially interesting – if generic - avenue to pursue, Tom questioning the nature of the humans he is programmed to serve. However, she doesn’t contemplate the subject again. This scene hangs in the air, like an odd sock on a washing line. You notice it but you can’t match it to anything. 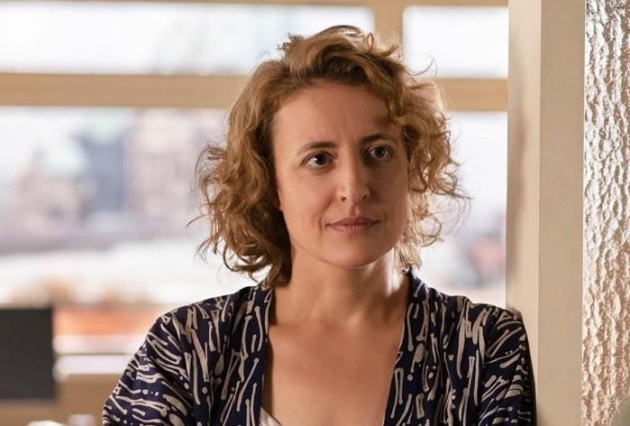 If Alma is to be seen in public with Tom, then they need a story. Tom decides that they met in a conference in Copenhagen. Before then Tom cleans Alma’s apartment, putting her books and papers in order. This earns her disapproval. ‘You would like me to put them back as I found them?’ he asks rhetorically. We watch him mess up the room at speed, but even this annoys Alma.

Fundamentally, Alma recognises Tom as a female pleasing device rather than a potential companion. She is reluctant to invite him into her bed, the one act for which he is programmed.  She does bring him to work – together with a cupholder full of coffees for her colleagues and sweet treats. Tom’s access to the internet presents Alma to an unwelcome revelation, putting her own future in doubt.

Things do go from bad to worse when Alma discovers her father beaten up in his home after a break-in. As far as Vati is concerned, he is more worried about the loss of the remote control. The police remark that it was fortunate that nothing valuable was taken. ‘No, it’s all valuable!’ screams Alma. ‘All these photographs [now strewn about the room]. All these things. They are all valuable!’ It is shared history that makes a life. Evidence of it – through photographs and mementos – anchor you to it.

There is a point at which Alma sends Tom away. Then she makes a discovery about the employee – who cups an imaginary walkie talkie to her ear for a reason. Alma also gives in to Tom’s purpose – cue an intimacy scene that is all about her loneliness and the regrets of the past.

‘Whenever I lie on a ping pong table, I always choose this side,’ Alma will tell him. Human behaviour can seem like programming, especially with all the social conventions we follow to put others at their ease. At the end of her film, Schrader questions whether it takes another person to make us happy; whether instead we can tolerate existence with an automated device that feeds our narcissism.  For some people, that’s a Twitter feed.