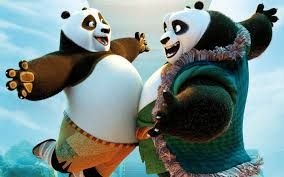 Kung Fu Panda 3 only half-qualifies as a film directed by a woman, since Jennifer Yuh Nelson shares the credit with Alessandro Carloni. Nevertheless, the film affords me the opportunity to raise the issue of women in animation. Women directors have a successful track record in short film animation (for example, Kristina Reed for Feast and Daisy Jacobs for The Bigger Picture, both Oscar-nominated in 2015), but with the exception of Jennifer Lee (Frozen) they haven’t hit it big in features. There is a sexist reason for this: animated features, which can cost up to $200 million, are corporately engineered to play safe. The ‘style’ is already pre-defined. Of the six animated features that were trailed with Kung Fu Panda 3, only one was non-Hollywood (Robinson Crusoe, already released in Europe). One was a sequel (Ice Age: Collision Course – I admit it, I laughed). One was based on a successful computer game (Angry Birds – The Movie - I admit, I didn’t laugh). One was based on a concept (The Secret Lives of Pets, amusing). One was based on edible main characters (Trolls, what the...) One was Zootropolis, also known as Zootopia which actually implies something very different. (Nevertheless, count me in.) None of these were directed by women.

Kung Fu Panda 3 on the other hand made me feel very depressed. My lad has grown up – he doesn’t even ask me to sneak him into ‘18’ rated films any more (those are ‘restricted’ for my American readers; bad parenting for anyone else). So it has been a while since I found myself watching a film designed for small people, as opposed to being in a cinema seat which can only be enjoyed by a short person – Odeon, you know what you need to do with leg room, stop copying easyjet.  Kung Fu Panda 3, a film so bland it doesn’t have a sub-title, has no reason to exist, though the makers had obviously seen Goldmember, the third Austin Powers movie and decided ‘the third movie – that’s the one where he meets his dad’. Why couldn’t they have seen The Enforcer, the third Dirty Harry movie and decided ‘that’s the one where he meets Tyne Daly’.

For those unfamiliar with the first two movies or cannot understand film titles (I say again, Zootropolis means something different to Zootopia), Kung Fu Panda 3 is about a panda, Po (voiced by Jack Black) who becomes an unlikely kung fu master. The world of Kung Fu Panda is entirely populated by animals – there are no humans. They stand in for the Chinese. So what this film says in a roundabout way is: where you see Chinese, we see animals. But don’t worry, they’re lovable, sassy or Jackie Chan, who somehow defies a single characteristic (go, Jackie). Please don’t take offence.

I really wanted Kung Fu Panda 3 to be the one where Po meets Tyne Daly, a female character who stands up to him, but somewhere in production, Rebel Wilson, who was cast as the female lead, was replaced by Kate Hudson. Hudson makes films where she leans on her adorable male co- star – wait, isn’t that Sarah Jessica Parker? At any rate, after a lean period (I know), she is looking for more substantial parts. Not here!  It is safe to say that the voice we hear the most is Jack Black’s. He has some pretty famous co-stars, but I think Seth Rogen had maybe a dozen lines, Lucy Liu maybe six, Jackie Chan four and Angelina Jolie some plot exposition. Incidentally, it is great to see Jolie getting her offspring to voice some of the minor characters – a film set in China that supports child labour. Dustin Hoffman sounds particularly croaky here, even more than when he played Ratzo Rizzo in Midnight Cowboy – I dunno, maybe he should try acting. As for David Cross, he quit the Alvin and the Chipmunks franchise for this? 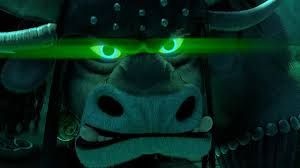 Panda 3 begins in the spirit world with the bison-like Kai (J K Simmons) facing up on to his old nemesis – and winning. He now has enough chi to get back to the real world, though somewhat confusingly, he’s still a spirit. Having been away for five hundred years, no one knows who he is. He is not even the stuff of legends. I mean, ask a kid to identify a bison, they’ll say ‘bull’ or ‘yak’ or ‘man-cow’ if they are particularly cute. Kai is determined to take the chi of anyone powerful enough to stand up to him and then – I don’t know, the writers didn’t think he’d get that far.

The only one who can stop him is the ‘dragon warrior’ aka Po. I don’t know why warrior needs the prefix ‘dragon’. It’s not like he can sprout wings, breathe fire and complain he can’t taste his food (‘it always seems over-cooked’). After his master, Shifu (Hoffman) retires, Po is given the task of teaching his friends, the so-called ‘furious five’ kung fu.  Why? Only by being put out of his comfort zone will Po finally learn something. I don’t wish to be rude, but none of the voice cast is put out of their comfort zone and I didn’t learn anything from the movie either. Then Po’s real life father (Bryan Cranston) turns up from nowhere having received a message from the universe (Wei Bo had yet to be invented) and invites him back to the secret community of pandas that strangely everyone can find. (I mean, seriously.)

Has Nelson put her stamp on the story? I don’t think so. A lot of effort has gone into the 3D (though I saw it in two dimensions – very fitting) and into the backgrounds. I marvelled at the computer recreation of animal fur, up there with Monsters Inc. (Please don’t quote me as ‘Kung Fu Panda 3 – up there with Monsters Inc.’ It truly isn’t.) But zero effort has gone into the dialogue or story.

At one point, Po bumps bellies with a female panda (Hudson) who wiggles her noise with a heart-shaped dimple at him. But Po doesn’t fall in love. He marvels at all the young pandas that look like him and never once concludes, ‘my dad really slept around’. In any case, there are hardly any female pandas – and Lucy Liu voices a snake; that’s gender reduction casting.

After turning two of the furious five into amulets – that will make them... unhappy – Kai demands to face Po. I mean there are belts that need unifying, trash-talking to be had. Tigress escapes to warn Po of the power of Kai, and only at this point does Po discover his gift for teaching. After all, he stood in for Mr Schneebly. (Wait, that was in School of Rock.)

Po makes an unfortunate discovery about his dad – and it is not about the children. But if movies teach us one thing we already know, it is to put aside our differences when faced with something we can’t even name, except if it’s ISIS.

I can’t actually call Kung Fu Panda 3 a lazy sequel. These films are expensive. But it illustrates that some animated films leave no room for sequels. The appeal of the first film is that Po discovers his gift. We enjoy the journey of discovery. Now he has it, there are very few discoveries he can make, except ones that are exempt from children’s movies. Kung Fu Panda doesn’t even have pop culture hyper-awareness. It plays the same darned song over the end credits (‘Kung Fu Fighting’) that we have heard before.

Writing this, I recalled that I once bought my lad some plastic Kung Fu Panda bo staff as a birthday present. This was really irresponsible of me – I mean, how is he supposed to defend himself with it in a real fight? Kung Fu Panda 3 is just an excuse to sell more plastic bo staff, or maybe (more likely) to offload unsold stocks. 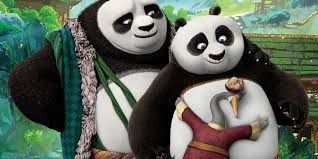